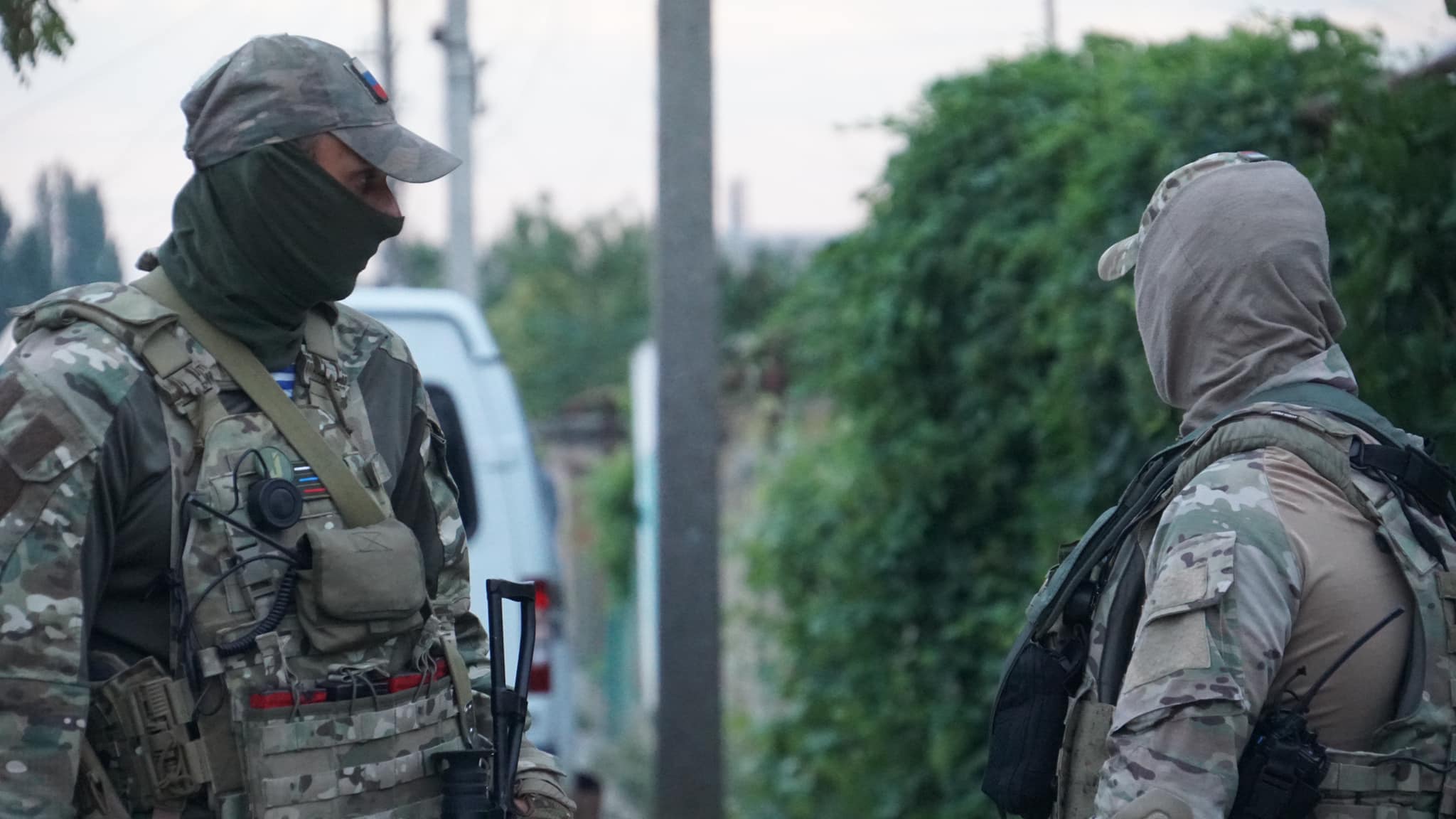 2022.08.11 During one of the armed searches on 11 August Photo Crimean Solidarity

Russia is continuing to deny that the massive explosions at a Crimean military base at Saki that destroyed up to nine of its warplanes were caused by an attack.  As the Institute for the Study of War noted, “the Kremlin has little incentive to blame Ukraine” since, by doing so, it will admit to serious weaknesses in Russia’s air-defence system.  Instead, the Chair of the Crimean Tatar Mejlis, Refat Chubarov, believes, Russia opted to avenge itself for the humiliation experienced by new mass arrests of Crimean Tatars on fabricated charges  One of the motives for the armed searches and arrests of Crimean Tatars has, from the outset, been propaganda aimed at presenting the main indigenous people of Crimea, who do not conceal their strong identification with Ukraine, as a threat.  The arrests are also known to bring bonuses or promotion to the FSB officers and may, therefore, have been planned, but the timing now might well be deliberate.

Armed and masked Russian enforcement officers burst into the homes of six Crimean Tatar civic activists from Dzhankoy and the Dzhankoy region of occupied Crimea at around 4 a.m. on 11 August.  According to well-known lawyer Emil Kurbedinov, he was prevented from reaching the men’s homes as his mobile telephone connection had been cut.  This, he notes, was a clearly targeted action, with the phones of several other lawyers also disconnected.  “This is done so that the victims cannot contact their lawyers, and so that correspondents and others cannot gather, and take photos and videos of these lawless actions by the enforcement officers,”  It is primarily publicity that the occupation authorities want to prevent, since the FSB always breach the law by preventing the lawyers from being present during such ‘searches’.  One of the many reasons is that the officers often arrive with the so-called ‘prohibited’ religious literature that they then claim to have found.

The attempt to block publicity did not succeed, with civic journalists from the Crimean Solidarity human rights initiative, arriving at the home of one of the civic activists, Enver Krosh.  The journalists began videoing the proceedings, with enforcement officers coming up to them and trying to stop them.  One of the journalists, Alim Suleimanov, told Graty that the enforcement officers had tried to grab his phone by force and had very roughly demanded that he get into his car and stop filming.  All of this is entirely illegal, but the enforcement officers in occupied Crimea believe, unfortunately with cause, that they can act like this with impunity.

The six now in custody and facing absurd charges and very long sentences include two men who have clearly been targeted for their civic journalism / activism.

Vilen has already faced detention and administrative prosecution (fines and administrative arrest) for totally peaceful civic activism.  He was earlier subjected to one armed search, with the enforcement bodies removing computer and other technology, as well as letters to political prisoners facing the same charges that the FSB now wanted to bring against the Crimean Solidarity journalist.

During the events on 11 August, Vilen’s wife, Elmaz, noticed that one of the officers had a book under his T-shirt.  When challenged the official refused to show what he was holding (and almost certainly planning ‘to find’ later).  The officer asked very aggressively if they wanted him “to undress” and added that he would force them to undress.  The same individual reappeared a little later, already without the book.

Vilen is 37 and has three children, including 6-year-old Khalid who has a grave heart condition.

Enver is a 31-year-old civic activist who was subjected to an attempt by the FSB to recruit him back in 2015 and to torture with the use of electric shocks, in December 2015.  Such ‘recruitment’ is aimed at obtaining false testimony, including pseudo ‘secret witnesses’ for use against Russia’s ever-mounting number of Crimean Tatar and other Ukrainian political prisoners.

Krosh has also faced administrative arrest for totally legal civic activism.  He has since told Kurbedinov that he was beaten and tortured in the vehicle that took him from his home on 11 August.  The ‘officers’ were trying to force him, in this way, to unblock his phone which he would have rightly understood he should not do without a lawyer present.  The beating and other forms of torture continued for around half an hour, however Krosh held firm and did not unblock the phone.

By the time, in the FSB building, that Kurbedinov was able to see Krosh, he had evident signs of beating around his head and his leg.  With Kurbedinov present, Krosh described the torture he was subjected to during the interrogation.

Krosh’s wife reports that the enforcement officers planted the literature they had brought with them in the bathroom.  It remains unclear whether the FSB do this deliberately or are simply too primitive to understand that no devout Muslim would keep religious literature in a bathroom, near a dog’s kennel, etc.

Seitiye Abbozov is 65 years old, making his arrest today especially shocking.  The conditions in Russian or Russian-occupation imprisonment are appalling, and likely to seriously damage the health of men half the age of Seitiye Abbozov.  The latter is well-known in Dzhankoy as a pigeon breeder.  Apparently when neighbours and civic activists began gathering outside his home, the enforcement officers put masks on so that the video footage would not reveal their part in this shameful arrest.

Three other men were also seized on 11 August: Renat Aliev, who is 58, Edem Bekirov (46) and 29-year-old Murat Mustafayev.

All of the men are now in custody, and are facing charges as part of what has been described as Russia’s conveyor belt of repression.  In none of these cases are any of the men accused of recognizable crimes, merely of alleged ‘involvement’ in Hizb ut-Tahrir , a peaceful transnational Muslim organization which is legal in Ukraine and which is not known to have committed acts of terrorism or violence anywhere in the world.  Russia’s Supreme Court declared it ‘terrorist’ in 2003, during a closed hearing which was kept secret until it could no longer be challenged and which is believed to have been politically motivated enabling Russia to forcibly deport Uzbek refugees back to Uzbekistan where they faced religious persecution for their beliefs, not prosecution for non-existent ‘terrorism’.  The FSB invariably designates at least one person (in this case, Enver Krosh) as ‘organizer’ of a supposed Hizb ut-Tahrir group under Article 205.5 § 1 of Russia’s criminal code.  The others are to be accused of ‘involvement’ in such a ‘group’ (Article 205.5 § 2).  It is likely that all will also be charged with ‘planning to violently seize power’, under Article 278.

There are no grounds for any of these charges, but none is needed, since the FSB plant ‘Hizb ut-Tahrir  literature’; use fake ‘experts’ to find ‘proof’ of Hizb ut-Tahrir  involvement in innocuous conversations and have ‘secret witnesses’ who may well never have set eyes on the men.  All six men face sentences of from 12 to 20 years, without any crime even impugned, let alone proven.