Those who unleashed this war will not go to Heaven. Anti-War activities In Russia, 7-14 August 2022 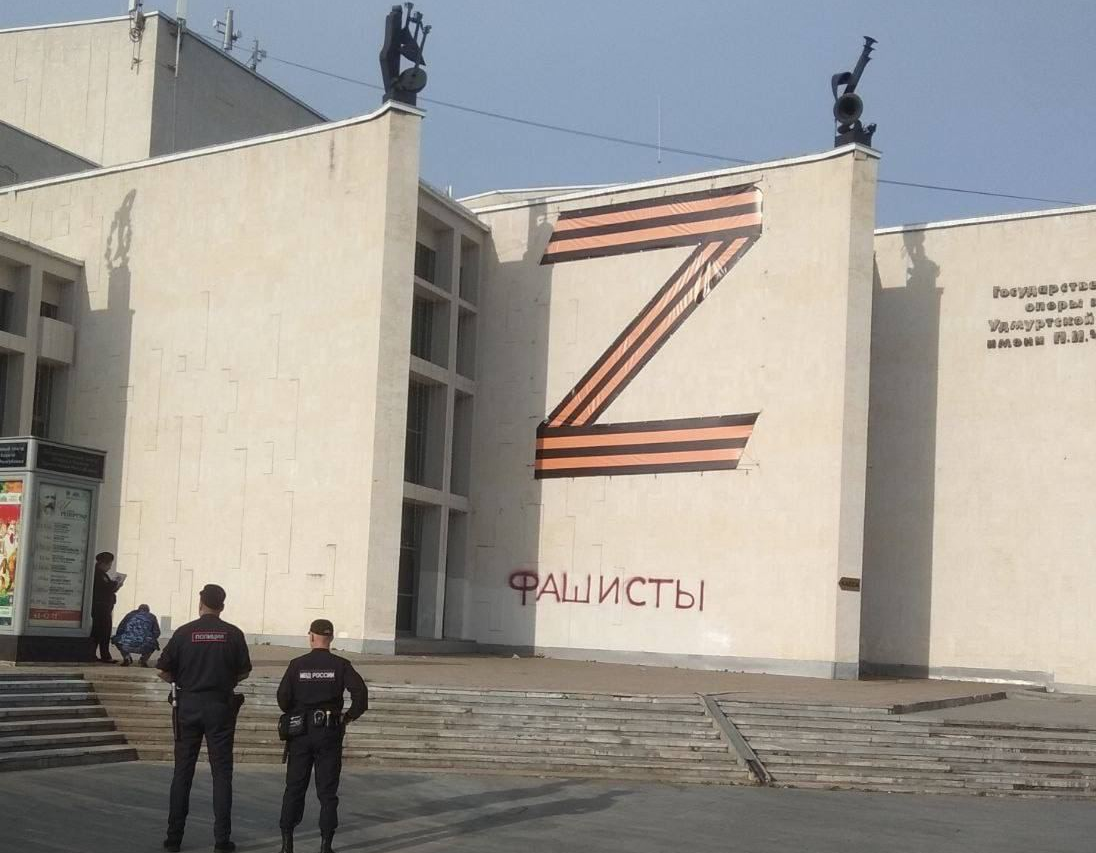 Soldiers against the War

Evidence gathered by Russian human rights organisations shows that no less than 1,793 soldiers from a quarter (22) of the country’s regions have refused to take part in military operations in Ukraine.

A paratrooper from the 56th regiment Pavel Filatyev, released a video clip on 1 August in which he called on his fellow soldiers to put an end to the war. He also gave an interview to the “No to the Gulag” website (Гулагу-нет). According to Filatyev, half of the paratroopers in his regiment do not want to take part in this war and have resigned their commissions. 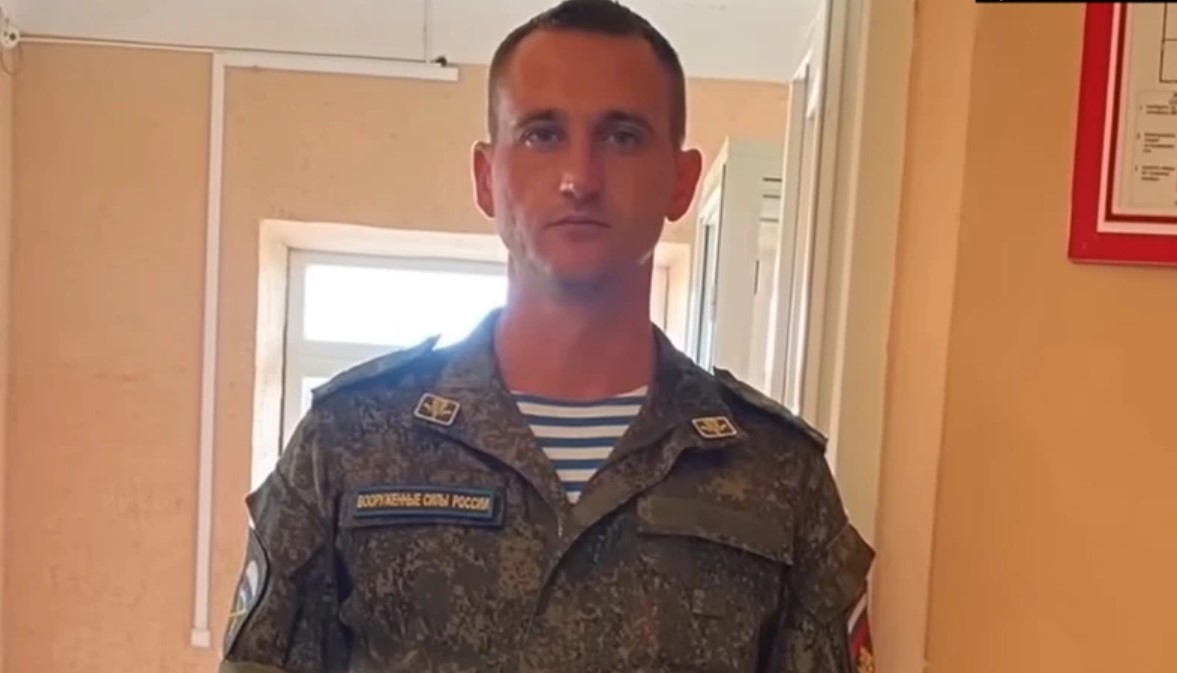 He has also published a 141-page book titled “Appeal”, in which he describes the state of the Russian army before the February invasion. His regiment was sent to Ukraine where haphazard use was made of its soldiers. According to Filatyev the paratroopers were not allowed mobile phones and were fed lies about a NATO attack on Russia through Ukraine.

Filatyev faces 10-15 years imprisonment in Russia for his testimony and for speaking his mind on the subject. He left the country to avoid persecution and imprisonment.

[On 23 August, Filatyev was the subject of a report in the British online newspaper The Independent.]

Nizhny Novgorod activist Alexei Onoshkin (Volga Federal District) has been charged with spreading “fake news” about the Russian army (Article 207.3, Criminal Code). The pretext was his post on the Vkontakte (In Contact) social network about the bombing of the Mariupol Theatre on 16 March this year.

Hackers have posted a film about the Bucha atrocity and an episode of the “FakeNews” programme exposing fake reports about the war on the website of the “Victory” cinema in Belgorod (Central Russia).

Alexei Navalny’s exposés of Dmitry Medvedev (“He’s not your mate Dima”, 2017) and Vladimir Putin (“The Palace, or the World’s largest Bribe”, 2021) were also posted on the same website.

A court in Tambov (Central Russia) supported police allegations that the eight asterisks (********) stuck to the rear windscreen of an automobile spelled “No to the War” and fined its own Artyom Kallas the equivalent of two months Minimum Wage.[1]

A court in Yekaterinburg (Urals) has fined Nadezhda Saifutdinova four Minimum Wages for “discrediting” the Russian army. As we described earlier (see Digest [E], 17-26 July) Saifutdinova shouted, “No to the War!” and, it was alleged in court, “Putin is a war criminal” as she passed a United Russia rally. 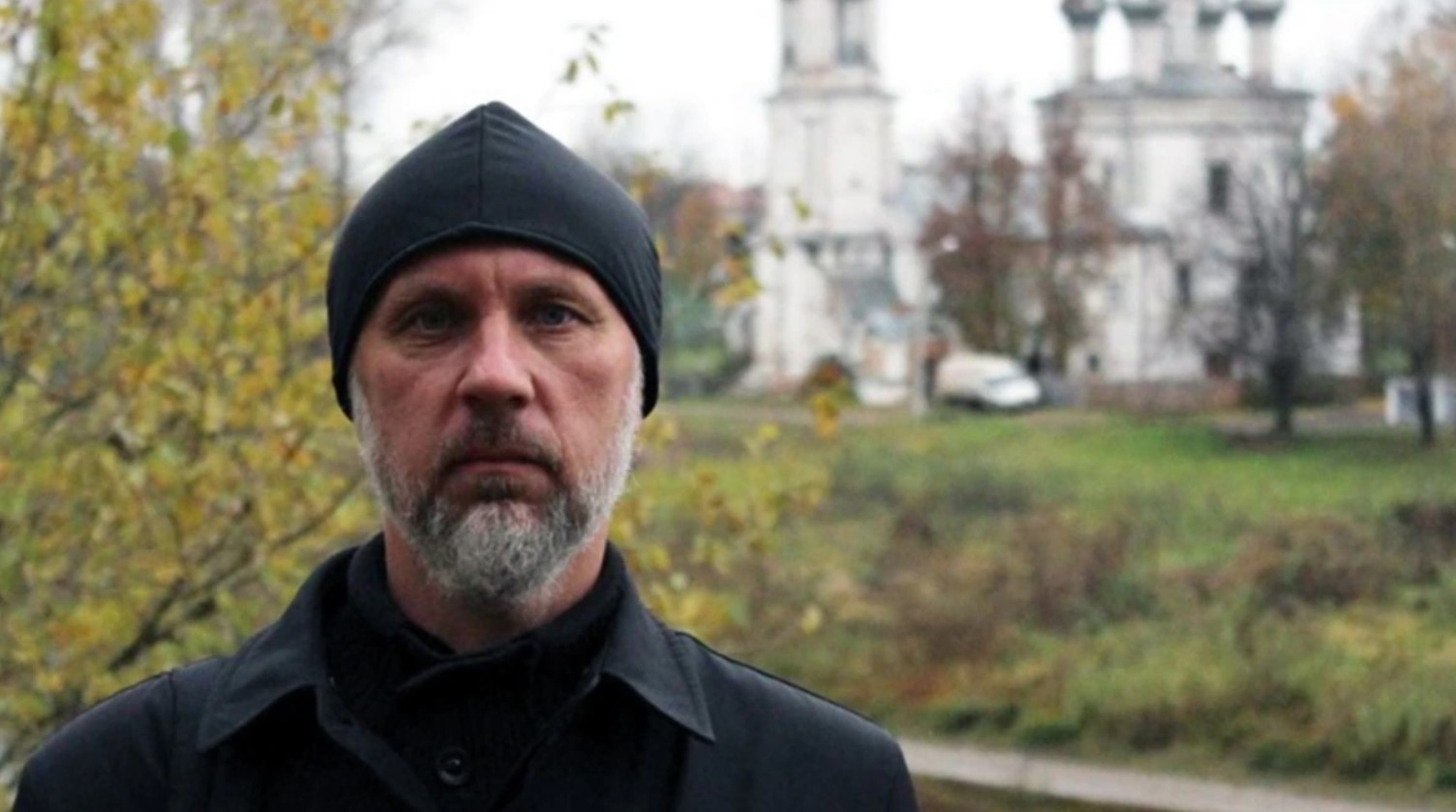 Father Ioann Kurmoyarov (Siberian Realities)
The pretext for these criminal charges was a video clip the Orthodox clergyman posted in March this year. In it Kurmoyarov suggested that Russian soldiers killed in Ukraine would go to Hell. “The blessed peace-makers will end up in Heaven,” he said. “you understand what I’m saying? The peace-makers. Those who unleashed this aggression will not be going there.”

Father Ioann has been held in custody since 9 June.

In the Urals, two students at art school removed a poster promoting the war from a stand there. A court considered the young women’s action to amount to “discrediting” the Russian army and fined them 2.3 Minimum Wages.

The Feminist Anti-war Resistance is continuing its Russia-wide protest, “You did not give birth to a soldier”. FAR activists have been writing such a slogan on the walls of maternity hospitals across the country. 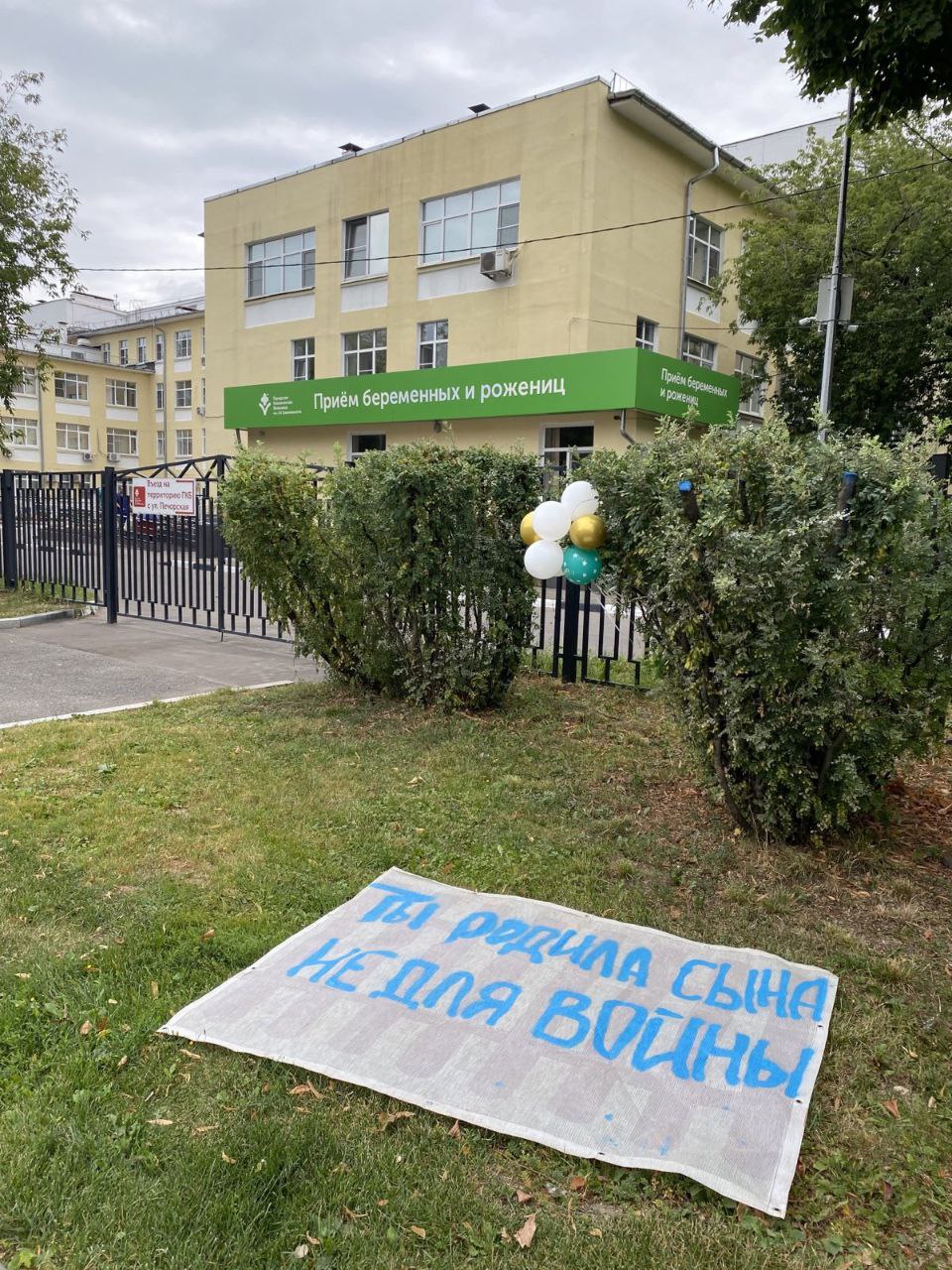 “You did not give birth to a soldier” (FAR)

The statement issued by FAR says

“By deceit, using money and threats, the State is taking away sons from thousands of mothers at this very moment, and sending them off to die in a senseless and criminal war. Wedonotwanttoplacetheblame for this war on pregnant women and new mothers, but are speaking out against the universal fear for their children which hangs in the air; we want to remind people that, if nothing changes in our country, their sons who were born in 2022 could also be chewed up in just the same way by the insatiable machinery of the State”.

The Taganrog City Court (South Russia) has given a local disabled man Vitaly Mishin a five-year suspended sentence. Mishin was convicted of spreading “fake news” about the Russian army (Article 207.3).

A war veteran, Mishin lost his left leg in a battle during fighting in Chechnya. He now faces a two-year probationary period. He has been banned from using the internet and must compensate the court for its expenses during his trail.

An officer of the Centre for Countering Extremism [CentreE] has brought charges against Almetyevsk city local Fairuz Kanafeyeva (Tatarstan). She is accused of “discrediting” the Russian army (Article 20.3.3) after posting anti-war items on In Contact (Vkontakte), the social media network.

“What is going on in people’s heads? Half a year ago they were opposed to Putin and used smart-voting [recommended by Navalny to undermine pro-regime candidates, tr.]; now they’re wholly in support of the dictator as he slaughters civilians in Ukraine.”

A fourth publication called on her fellow Tatars not to support the war or allow the name of their nation to be exploited “in the interests of Moscow’s military machine and of Russian imperialism.”

On the embankment next to the Yekaterinburg dramatic theatre (Urals) unidentified activities repainted a balloon in the blue and yellow of the Ukrainian flag.

In the city of Yaroslavl (Central Russia) law-enforcement officers caught a 22-year-old young man who was trying to rip the letter Z from a lawn.

Later they released a video clip, in which the detainee changed his opinion about the war and apologised for his behaviour. He was also charged with “discrediting” the Russian armed forces (Article 20.3.3, Administrative Offences).

Lawyer Alexander Salamov (see Digest [E],  27 July-5 August) has been fined five Minimum Wages by the Tver district court in Moscow. On 4 August he protested next to the Grave of the Unknown Soldier by the Kremlin wall.

Attacks have been made on a monument in the large city of Kursk (Central Russia), recently erected in memory of those who died during the “limited military operation” in Ukraine. Parents and widows said that the attackers threw aside the wreaths and other funereal objects, ripping the inscribed sashes.

Marina Ovsyannikova, former editor of Channel One TV, has been placed under house arrest. In March this year she protested during a live news broadcast with a placard calling for an end to the war in Ukraine.

Ovsyannikova is waiting for the investigation of her case to end and a possible trial for spreading “fake news” about the Russian army. If prosecuted under Article 207.3 of the Criminal Code, she could face up to 10 years imprisonment.

The reason for the investigation was a one-woman protest she held on 15 July on the Sophia Embankment opposite the Kremlin. As reported (Digest [E] 9-16 July 2022) she was carrying a placard that read “Putin is a murderer, his soldiers are fascists. 352 children have died. How many more must die before you stop?”

She was also charged for an anti-war post on Facebook for which a Moscow court fined her 3 Minimum Wages for “discrediting” the Russian army (Article 20.3.3).

An inhabitant of the town of Primorsko-Akhtarsk in the Krasnodar Region of southern Russia Gennady Vladimirov posted a video that showed him burning his army uniform and military ID. The court fined him three Minimum Wages for “discrediting” the Russian army (Article 20.3.3).

An arrest warrant has been issued for Omsk city deputy Dmitry Petrenko (west Siberia). He is charged with circulating “fake news” about the Russian armed forces and “exploiting his position for reasons of political, ideological, racial, ethnic or religious hatred or enmity”.

The pretext for seeking Petrenko’s arrest was his publication on social media of photos and video footage of the destruction in Mariupol and of the children who had suffered there. He will be taken into custody as soon as he’s arrested. Hislocationispresentlyunknown.

A court in Yekaterinburg (Urals) has fined Oleg Yagodin, lead singer of the Kurara group, three MinimumWages for an anti-war remark during a concert. “No to the War, no to such Crap,” he said. “Keep well and keep thinking!”

When the charges against Yagodin were drawn up, however, the police claimed that the musician had said “Putin is a Thief”. 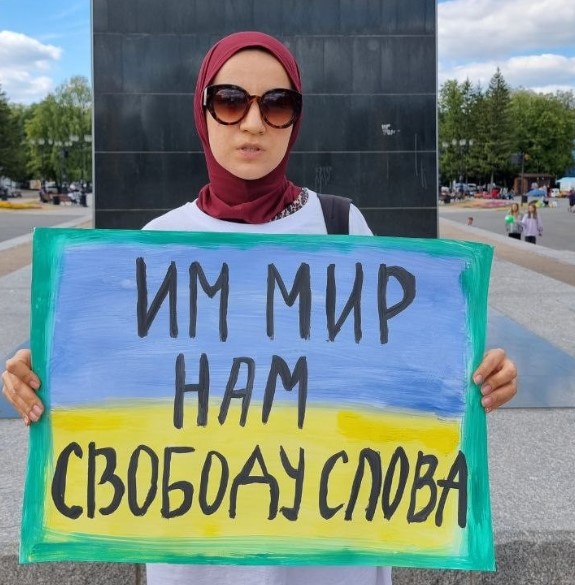 In Ufa, the capital of Bashkortostan (Volga) Elmira Rahmatullina staged a one-woman protest, carrying a blue and yellow placard that read, “Give them Peace and us, Freedom of Speech”. She was arrested and taken to Ufa’s No 6 police station.

[1] The Minimum Wage in Russia

The Minimum Wage in Russia was originally set in accordance with the cost of the most elementary ‘consumer basket’, says the entry in Wikipedia. In 2021 and 2022 changes were made to the way it was calculated.

Compiled by Memorial volunteers from these and other sources: 7x7 Horizontal Russia; The Anti-war Committee of the Kuban; Draft Copy; the Feminist Anti-War Resistance; and Novaya Gazeta (Europe).