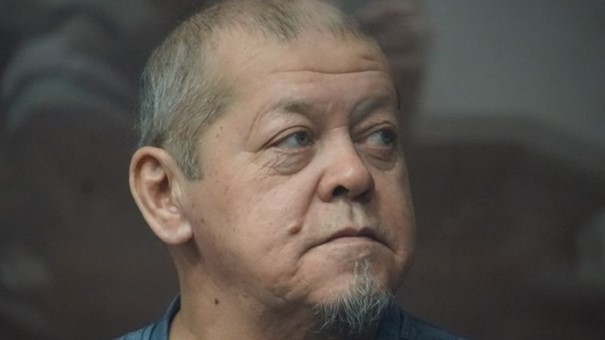 A Russian ‘court’ has upheld the eleven and a half year sentence against 64-year-old Zekirya Muratov despite the lack of any substance to the charges and compelling reason for seeing this as an effective death sentence. The Crimean Tatar pensioner and former musician has Grade III disability status and numerous grave medical conditions which make the long sentence as formal as the cynical charges against him.

Renowned human rights lawyer Emil Kurbedinov reported on 6 September that the Military Court of Appeal in Vlashikha (Moscow region) had ignored the detailed legal arguments demonstrating the flaws in the ‘case’ against Muratov and had left the 11 February 2022 sentence unchanged. Kurbedinov stressed that the charges were based solely upon a flawed Russian Supreme Court ruling from 2003 and of a purely formalistic nature. The charges of ‘terrorism and planning to violently overthrow the state’ “are absolutely fabricated, with no weapons or explosives found on any of the political prisoners.  Everything is based merely on conversations and on the testimony of secret witnesses who are, essentially, agents of the state”.

The Russian FSB in occupied Crimea has been persecuting Crimean Tatar and other Ukrainian Muslims on fake ‘terrorism’ charges since 2015. An ever-increasing number of the victims of such persecution are, like Muratov, men who refused to be silent about the mounting repression under Russian occupation and who attended political ‘trials’ and sought to help political prisoners and their families.

The story of Muratov’s persecution predates his arrest and began in the middle of April 2020 when Ukrainian traitor turned FSB officer Aleksandr Kompaneitsev tried to ‘recruit’ Muratov to give false testimony against other Crimean Tatars. Kompaneitsev had, by that stage, already played a similar role in the persecution of Crimean Tatar human rights activist Emir-Usein Kuku and five other Amnesty International prisoners of conscience. He has since also used such methods against other political prisoners.

Absolutely all of these ‘trials’ are based on secret ‘witnesses’ whose testimony cannot be verified and who may never have even met the political prisoners.  Kompaneitsev demanded that Muratov play such a role and received a categorical refusal.  Muratov spoke of this in court, naming Kompaneitsev and saying that the latter had threatened to get him a prison sentence if he didn’t agree to collaborate with him.  The FSB man, Muratov said, had complained that “there was no use” in the FSB’s previous ‘informer, and had told him that if he worked with the FSB, he’d “have a green light”.  If he refused to do so, he’d “go down hard”.  Muratov told the court that he had refused, saying “let them imprison me, I will not go against my people, and against my religion.”

Kompaneitsev’s reprisals against Muratov were swift. Armed FSB and other enforcement officers, many of them wearing masks, burst into Muratov’s home at around 3 a.m. on the morning of 7 July 2020. They claimed to have ‘found’ a religious book which Muratov’s wife says was not theirs and took her husband away. During all such armed ‘searches’ the FSB illegally prevent lawyers from being present, and bring their own, supposedly ‘independent witnesses’ with them.

Muratov was charged only with ‘involvement’ in Hizb ut-Tahrir, a peaceful, transnational Muslim party which is legal in Ukraine, and which is not known to have carried out acts of terrorism anywhere in the world. Russia has never provided any grounds for a suspiciously secretive 2003 Supreme Court ruling that declared Hizb ut-Tahrir ‘terrorist’,  It has, however, been using the ruling, since the first arrests in January 2015, as ‘justification’ for imprisoning and sentencing Crimean Tatars and other Ukrainian Muslims to terms of imprisonment up to 20 years on supposed ‘terrorism charges’.  In each case, a person is accused either of the more serious ‘organizing’ a Hizb ut-Tahrir group (Article 205.5 § 1 of Russia’s criminal code, carrying a sentence of up to life imprisonment, or of ‘involvement’ in such an alleged group under Article 205.5 § 2.

It was purely on this charge of ‘involvement’ that, on 20 January 2022, Russian prosecutor Sergei Aidinov demanded a sentence of 12 years in a harsh regime prison camp.  Muratov was not accused of any recognizable crime and the only ‘evidence’ against him came from ‘secret witnesses’, probably men who had lacked his courage and agreed to collaborate. Russia’s prosecution of any Ukrainian citizens in occupied Crimea is in violation of the Fourth Geneva Convention regarding occupied territory.  Despite all of the above, on 11 February, presiding judge Timur Khabasovich Mashukov, together with Igor Vladimirovich Kostin and Roman Konstantinovich Plisko from the Southern District Military Court sentenced Muratov sentenced Muratov to 11.5 years. There is every reason to believe that the prosecutors and judges in this case were well aware that the ‘testimony’ from the secret witnesses was fabricated (details here).

Zekirya Muratov suffers from a number of potentially life-threatening conditions, including a heart defect and cardiac insufficiency, high blood pressure; a dropped kidney, causing constant attacks of acute pain, and much more.  Two Russian ‘courts’ have now been complicit in what can only be his death sentence.