‘In a panic, people abandoned their bed-ridden relatives.’ А resident of Mariupol story about how people were coerced to leave for Russia‘I don’t want to see them in the dock. I want to see them dead,’ a man from the Mariupol Drama Theatre says“All the Buildings on our Street were Destroyed” (Rubizhne resident)“I Gave the Dogs Vodka to Keep Their Hearts Going” (Mariupol Resident)“I entered a store and burst into tears” — three weeks under bombardment in Mariupol ‘There were more than fifty bullets in the body of a friend’‘People flew in the air like leaves — there was such a strong explosion’‘The helicopter skimmed the treetops.’ Azov fighter tells of his evacuation from Mariupol.‘I was afraid that I won’t be killed at once but will be maimed’ – a resident of Rubizhne‘Mariupol Moses’: A Man Who Took 117 People Out Of The Besieged City On FootA resident of Mariupol is telling how she found civilians killed by a sniper‘I survived 21 days with a shard in my body. I was lucky’‘I washed and buried my brother riddled with shrapnel, and his bloodied and wounded mother was barely in time for the burial…’‘We were lying in the open air, shells were whistling overhead.’ A resident of Mariupol tells about the evacuation and the situation in the city‘The enemy was just under our windows…’ – Anastasia from Irpin‘I saw fire arrows flying from Kherson...’‘... I sang in the basement to calm my daughter down’‘They were trying to kill me, but I wasn"t killed.’ — a story of a woman who saw the airstrike on the Drama Theater in Mariupol"Did the Chechens cut your heads? No? We will do it..."‘There was a human being, and the body was torn apart in an instant’ — a Mariupol graduate who went through hell
• Voices of war

‘They shot at our feet, near us, and one guy was wounded with an electric shocker...’ 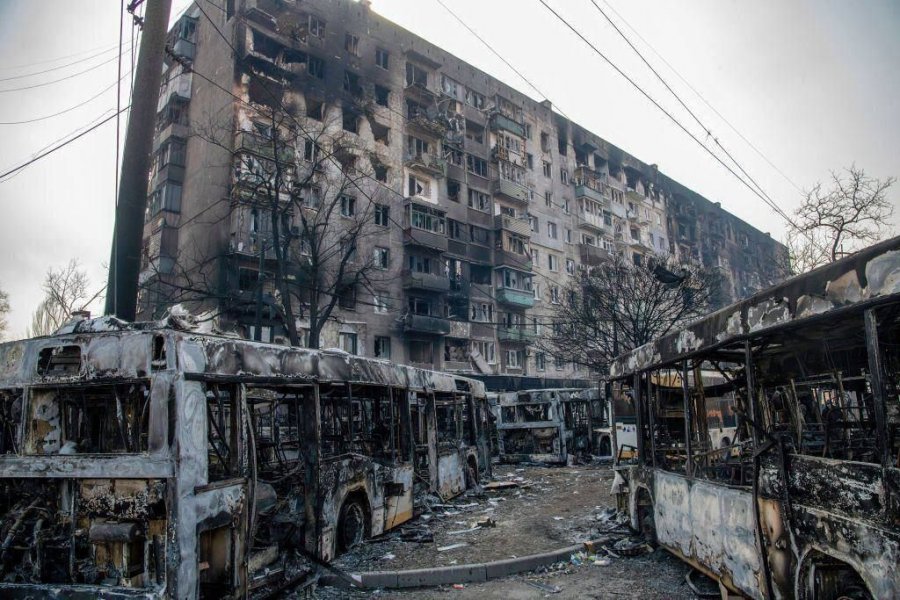 We do not give the name of the hero of this material, because his relatives are still in the occupied zonе.

I am a resident of Mariupol. Now I have moved to another city. Until 2014, I worked for an international company, but then I started volunteering. I had an IT school that provided social computer courses for teenagers, orphans, and orphanages.

Tell me, please, what was your impression from the first day of the war?

I am a volunteer, so we agreed with colleagues that we would meet at the volunteer center to help civilians. February 24 was the last time I spent the night at home with my family. After that, I moved to the volunteer headquarters. First, shelling began on the outskirts of the city: it was the Oktyabrsky district. Over time, shelling started in other areas. Then the Russians surrounded Mariupol and the ring around it began to gradually narrow until they reached the center. The last area was, as you know, the Azovstal plant. As for the chronology, I don’t have any specific dates now, but I remember that at first there was shelling in the Vostochny and Oktyabrsky minidistricts, later the Primorsky minidistrict (it was partially captured). Russian troops also entered from the Donetsk highway and the west of Mariupol, through  Bus Station–2. In the south of Mariupol, we had a supermarket “Epicenter”. First, they destroyed it and later settled there. After that, they began to methodically narrow the ring and clear the streets.

Did you volunteer during these events? Perhaps you have witnessed memorable events?

Of course, I volunteered. Like most residents of Mariupol, I witnessed the shelling. In the end, our volunteer headquarters was bombed. I saw the bombed-out city hospital No. 3, in which, as they say in the Russian media, our soldiers were hiding. But there was no one there, except for the women, who were giving birth, and babies. The city was completely destroyed. Imagine a nine–story building in which, after it was bombed, several entrances do not have the top five floors. There were just sinkholes and burned–out, charred houses. Now the whole city looks like this.

We believe that we are now witnessing an act of genocide against the Ukrainian people in this city. Perhaps you witnessed the events when people in the queues for water were shut at, or saw deliberate bombing?

It was almost endless bombardment and artillery shelling. If I'm not mistaken, about six or seven bombardments a day and constant artillery gunfire. Almost all bombs hit civilian targets. They flew into hospitals, residential buildings, schools and kindergartens. The remaining schools and kindergartens were a refuge for the Russian military. Yes, I believe that almost all attacks targeted civilians. There were two or three military installations in the city, and everything else were civilian objects. It is blasphemy when Russians hide behind the claim that they fired at military facilities when there was nothing military in these areas.

What exactly did you do during the occupation?

During the work of our volunteer headquarters in Mariupol, we distributed food and medicine to more than twenty–five thousand residents. Constant shelling left a huge mark on the local population, because people were not ready for this. I think that for those who did not find themselves at the epicenter of the war, it is difficult to understand what it means to have everything: hot water, electricity, heating, the Internet, communications and information, and one day lose everything. I had to bury people under constant shelling. The ground was frozen, there were a lot of corpses. They lay right on the streets of the city and the inhabitants covered them with sheets, bedspreads, or blankets. When it began to warm up, I was still at home, and with my neighbors, I began to bury our dead. We dug graves and buried people. Of course, these were mass graves. At that time, the city was occupied, Russian tanks with a Z painted on them drove around and fired at the houses, but we still buried people. I don't know who they fought with. Maybe even with themselves.

They fired near civilians, drawing fire on themselves and people who were cooking nearby.

Russian troops most often fired from civilian areas, realizing that Ukrainian troops would not be able to shoot back so as not to harm our civilians. I often saw how they drove in a tank, stood near a civilian house, fired, and then left. I have witnessed this. If someone will try to prove to me that they did not fire at civilian areas, this is a lie. Almost all shelling that I saw was on civilians and civilian areas. I saw a crater more than twenty to twenty–five meters wide next to houses in an area where there are no military installations at all.

Tell me, please, how did you manage to escape from this hell?

I and a few other volunteers were in our volunteer center. On March 19, the Russian military entered it. If I'm not mistaken, the helmets were inscribed “Special Forces”. I and another volunteer were locked in one of the rooms in the volunteer center, there was also a dog of one of the volunteers with us. And other volunteers were sent to spend the night in a bomb shelter, which was next to us. The next day they called us in for questioning. I personally had six interrogations. In order to increase their power and effect, they used psychological pressure: they shot at our feet, near us, and one of our guys was wounded with an electric shocker. They threatened us with the firing squad. The Russian military said, “Now there will be an execution here, take everything out of your jacket pockets and sit down.”

I can say that the psychological pressure was tough during those interrogations. For example, I can quote this phrase, “If I don't like your answer, I will shoot.” During interrogations, they shot at our feet with a pistol, as if they doubted that we were telling the truth and were trying to intimidate us in this way. But they didn’t learn anything interesting from us, they let me and a few other guys go. They let us pick up our things and just let us go. Together with my friend's dog and other guys, I went home through the entire city. We went together because they lived in a bomb shelter not far from my apartment: they went to the bomb shelter, and I went home. There were no windows in the apartment. I found two shell fragments. The neighboring house burned down completely: there was just a charred pillar. For two days I spent the night in my apartment at sub–zero temperatures, and the water in the tanks froze. Two days later, my father–in–law came to the apartment, and we decided that I would stay in his house for several days because there was a well with water nearby. We walked to his house.

Of course, while walking almost through the entire city, I saw a lot of broken private houses and burned–out high-rise buildings. For several days I lived with my wife's parents. We had no telephone connection, but on March 26 I decided that I needed to leave the city. I was taken to a nearby urban–type settlement called Nikolskoye, and from there I walked to Mangush. I spent the night there and, using the last of my funds, found a person who was engaged in transportation. I waited five days for the convoy to be let through. The convoy was supposed to leave Zaporozhzhia daily, but it was deployed to Berdyansk. There were about 1000 of us. We waited and, it seems, on the thirty–first of March we were released. A rescue service official warned us that Russian troops would not allow them to stay here and that if they did, they would be shot at. Therefore, they were forced to quickly leave the city. We were able to take my family and family of friends. Those people who lived near the place where the buses stopped (transport was not allowed directly into Berdyansk) also jumped on the buses. Among the forty–two buses that arrived, perhaps ten percent were full. The buses left, spent the night in a neighboring village, and the next morning they returned to Berdyansk and were fully loaded. There were about twelve checkpoints from Berdyansk to Zaporozhzhia. At each checkpoint, all the men were taken out of each bus, searched, their phones and documents checked. Russians were looking for tattoos: they forced all the men to show their arms, legs, and shoulders. Women were taken out at several checkpoints and their phones and documents were checked as well. At one of the checkpoints, I saw a man standing in his shorts. He was searched more thoroughly. On the first of April, we were in Zaporozhzhia. That is, we traveled from Berdyansk to Zaporozhzhia for about sixteen hours.

Tell me, please, what are your plans for life after the war?

This is probably a very difficult question because I don't know how I will react after what I and my family have gone through. Perhaps, at first, all of us will have tears of joy, then I plan to go to my parents. After that, I plan to help in any way I can to restore my country. Currently, I work in a public organization that trains orphans in the field of IT. This is very similar to what I did in Mariupol. Most likely, I will continue to do this in order to help the country to have the more promising future that it deserves.