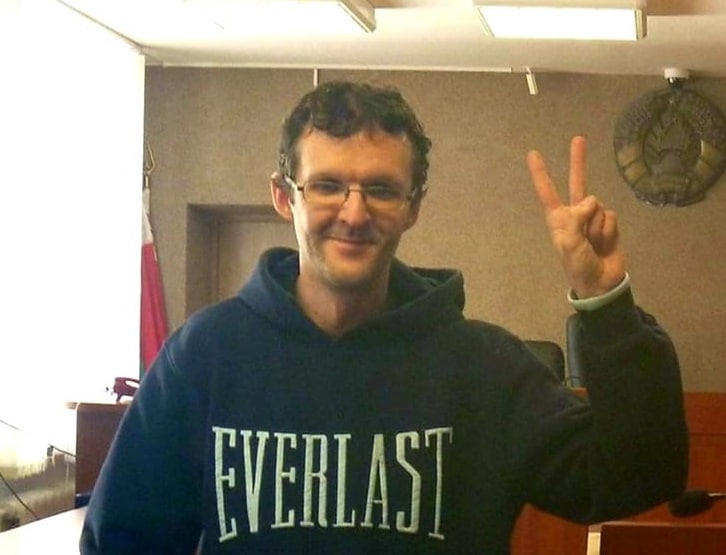 Denis Ivashin Photo from the Belarusian Association of Journalists

A Belarusian court has sentenced investigative journalist Denis [Bel. Dzianis] Ivashin to 13 years and one month in a harsh regime prison on spurious charges of ‘interfering in the work of the police’ and of ‘state treason’.  Ivashin, a journalist for Novy Chas [New Times] and editor of the Belarusian site of InformNapalm, played an important role in exposing the Russian fighters who first took part in Russia’s invasion of Crimea and Donbas and were later deployed to prop up the regime of Aleksander Lukashenka.  It was noted at the time of his arrest that the KGB were especially interested in anything linked with Ukraine.

Ivashin’s trial began on 15 August 2022, with the sentence passed by ‘judge’ Valery Romanovsky from the Grodno Regional Court less than a month later, on 14 September.  The hearings were behind closed doors, with it claimed that the case involved ‘state secrets’.  Ivashin was also  ordered to pay a fine as well as ‘compensation’ to nine supposed ‘victims’ in the case.  The sentence has been condemned by the Belarusian Association of Journalists and the European and International Federations of Journalists.  The latter called this a travesty of justice and demanded Ivashin’s immediate release.  According to the Belarusian Viasna Human Rights Centre, Ivashin had problems with his heart in the summer of 2021.  Other reports speak of a heart attack.  The journalist’s correspondence is blocked, and his is prevented from receiving publications.  He has been frequently placed in the even more appalling conditions of a Belarusian punishment cell, with such measures probably reprisals since, despite such pressure, he has refused to ask for ‘a pardon’.

The KGB carried out an armed search of Ivashin’s home in Grodno in the evening of 12 March 2021, two days after the journalist gave an interview to Current Time in which he spoke of his investigation into the deployment of former Ukrainian Berkut officers in helping Lukashenka hold on to power.  At the time, the only charge mentioned was that of ‘interfering in the activities of police employees’ (under Article 365 of the Belarusian criminal code].  It was claimed that he had divulged personal data, however Ivashin’s wife, Olga, noted that the KGB officers seemed particularly interested in anything to do with Ukraine.  Ivashin was taken away, and has been imprisoned since then.

Ukrainian human rights activists reported at the time that Ivashin has Ukrainian roots and had been active in support Ukraine in its struggle against Russian aggression.  Even before Russia’s full-scale invasion of Ukraine, which the Lukashenka regime has actively abetted, such support put him in danger, as did all of his investigative journalism.

The charge of ‘state treason’ [Article 356 § 1] was added later.  It is safe to assume that the purported ‘state secrets’ that were used to justify a closed trial involved Ivashin’s investigative journalism which was of major public importance.

The timing of his arrest suggests that the Lukashenka regime, and possibly Moscow, were riled by three pieces of investigative journalism.  The three articles published on 28 October 2020; 23 December 2020 and 4 March 2021 identified Russian military servicemen, as well as special units from Rosgvardia, earlier deployed in the invasion of Crimea and military aggression in Donbas, and later moved to help the Lukashenka regime’s most savage crackdown to date on Belarusians demanding democracy.

The first of the articles was entitled: ‘What are military men who occupied Crimea and Donbass doing in Belarus?’.  Ivashin pointed out that military competitions and manoeuvres were being used as a pretext for deploying Russians with considerable combat experience gained during Russia’s aggression against Ukraine, as well as Rosgvardia special force units.  He mentioned, for example, joint exercises, called ‘Indestructible Brotherhood 2020, by the Collective Security Treaty Organization held in Belarus from 12-16 October 2020.  These were headed by CSTO Head, Colonel-General Anatoly Sidorov, whom the Ukrainian Myrotvorets has labelled a war criminal for his commanding role in military aggression against Ukraine during the spring and summer of 2015.

It was in the third of the articles that Ivashin also identified the ex-Berkut officers who helped crush mass protests against the rigging of presidential elections (which Lukashenka undoubtedly lost).  In the interview two days before his arrest, Ivashin explained that they were aware of more than 10 former Berkut officers, including one woman, most of whom were now working for the Belarusian OMON, or ‘riot police’.  He pointed out that the Ukrainians had received Belarusian citizenship, although there were no grounds, and their work for another country’s enforcement structure should have been an impediment.  This, in fact, has been true also of all the Berkut officers who fled to Russia.  Those now in Belarus hold various posts, with one  - Ihor Zapalukh – the deputy commander of an operational-combat unit.  He is now a sniper, as he was in the Mykolaiv Berkut in Ukraine. The list includes three former captains among them: Serhiy Havryliak and Dmytro Antsupov from the Mykolaiv Berkut and Serhiy Kiminchyzhi from the Odesa branch.  Ivashin openly stated that Ukraine’s SBU should be interested in these ex-Berkut officers as some might have been involved in the ‘Red Regiment’ under commander Dmytro Sadovnyk which is believed to have taken part in gunning down activists in February 2014.

In one of the letters Denis has been able to get to his wife, he wrote the following: “With sincere and firm faith we move forward and take a confident step into the future. Despite incredible challenges, threats, and a strong storm wind, we continue unswervingly, with persistence and determination. We will not deviate from the path of truth and of the Faith that demands sacrifice.”