Russia sends forcibly mobilized Ukrainians from occupied Donbas to die as ‘live bait’ at the frontlineCovert mobilization and Ukrainian conscripts from occupied Crimea sent to die in Russia’s war against Ukraine Russian legislative changes would mean school leavers can officially be sent to fight in Ukraine Desperate plea from the wives of Donbas men seized and sent to fight Russia’s war against UkraineRussia deports Ukrainians to occupied Donbas, forcing them to fight its war against Ukraine Russia is forcibly ‘mobilizing’ Ukrainians from occupied territory to fight its war against Ukraine Russia plans total ‘filtration’ of Mariupol men and forced ‘mobilization’Russia destroys Mariupol and tries to get illegally deported residents to move to Siberia Russia accused of using mobile crematoria to hide its war crimes in Mariupol At least 50 Ukrainians were burned to death in Russia’s bombing of Mariupol hospitals Russian FSB produce ‘refugee’ propaganda video blaming Ukrainian soldiers for Russia"s war crimes in Mariupol Russia continues bombing Mariupol while producing propaganda videos about its ‘humanitarian aid’Russia responds to International Court order to stop bombing Ukraine by destroying Mariupol Theatre sheltering familiesRussian invaders take Mariupol intensive care hospital and its patients hostage Mass graves of the Ukrainian civilians Russia claims it is not killingTerror and abductions as Russia tries to break Ukrainian resistance in Kherson and other occupied citiesUkrainian journalist Oleh Baturin feared abducted by Russian invaders in Kherson oblast Mayor of Melitopol Ivan Fedorov abducted after refusing to collaborate with the Russian invaders Russian priest arrested and prosecuted for sermon opposing Russia’s war against Ukraine Russia effectively admits it deliberately bombed the maternity hospital in Mariupol that killed three patients, including a child
• Topics / War crimes 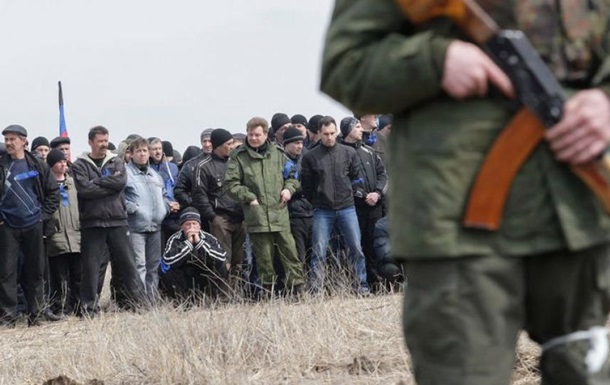 Ivan Fedorov, Mayor of Melitopol, has predicted that the Russians will soon begin a  “real hunt” for men in occupied parts of the Zaporizhzhia and Kherson oblasts and advises all Melitopol residents of call-up age to leave the area immediately.  He warns that those who refuse to go to their deaths will have to deal with Chechen anti-retreat forces. There won’t be any way out, so leave now, he urges men.

Although Fedorov was referring specifically to Russian leader Vladimir Putin’s decree on [partial] mobilization, this was probably the logical continuation of another sinister decision.  Russia is to hold pseudo ‘referendums’ in the occupied parts of Donetsk, Luhansk, Kherson and Zaporizhzhia oblasts this weekend, with the plan clearly to swiftly declare them all ‘part of the Russian Federation’.  The move has been rightly dismissed as of no legal standing by the OSCE and all democratic countries but will undoubtedly be used, not only for blustering threats about ‘attacks on Russian territory’, but as a pretext for seizing more Ukrainians and sending them to be killed in Russia’s war of aggression against Ukraine.

There have already been reports of this from Mariupol and other parts of the Donetsk and Luhansk oblasts seized since Russia began its full-scale invasion of Ukraine.  Petro Andriushchenko, Adviser to the Mayor of Mariupol, reported on 17 September that two very young lads, born in 2003 and 2004, had died in hospital of over 80% burns.  “Both burned in a Russian tank. Both ended up in the invaders’ army after occupation. They got into the army through covert mobilization as ‘fire inspectors’”.  Andriushchenko’s advice is the same as that from the Mayor of Melitopol.  “You can continue to deny covert mobilization and burn in Russian tanks. Or you can heed the voice of reason and evacuate to safety”.

It may well already be too late to evacuate from Mariupol. On 18 September, Andriushchenko reported that in Manhush the first seizures of men in forced mobilization had begun.  He predicted that this would begin in Mariupol itself at the beginning of October, however that was prior to the announced pseudo ‘referenda’ and Putin’s ‘partial mobilization’.

Andriushchenko is in no doubt how this so-called ‘referendum’ will take place in Mariupol.  Some signatures will be obtained by the standard methods Russia knows best – if you want any repairs after Russian bombing and shelling of the city, sign the form put in front of you.  He predicts, however, that “the major part of the ‘referendum’ will taken place in the offices of [Russia’s ruling] United Russia.  They have full electronic data for all Mariupol residents who have at least once sought humanitarian aid. This means just about everybody in a city which Russia systematically destroyed in order to seize. With this database, there’s no particular need to even go to the pretence of going around apartment blocks for signatures.  They can concoct it all in the United Russia offices.

The faked ‘result’ of such pseudo-referenda is, after all, clear in advance, with Andriushchenko writing that the ‘support for joining Russia’ should be no less than 80%, but no more than 87.  “Why is unclear, but a fact”.

In the areas effectively occupied by Russia since 2014 (the proxy ‘Donetsk and Luhansk people’s republics’), men were rounded up to fight from the very beginning.  No heed was taken of health problems, nor were the men given proper training.  Russia effectively used them as cannon fodder, since their deaths did not need to be recorded, nor did they need to pay compensation to the men’s families.

On 14 June, the wives of a number of men from the so-called ‘Donetsk people’s republic’ issued an appeal, saying that they had not heard from or about their husbands since the later were ‘mobilized’, i.e. seized from their workplace, on 24 February 2022.  Since then, their wives have tried desperately to find out where they are and even whether they are alive, with no success.  The main spokeswoman said that about 50% of the men were clearly in a bad physical state, but that there had been no medical commission.  It was only in the second half of April, two months after the men were taken away, that the proxy ‘republics’ openly admitted to cancelling medical examinations of those they planned to mobilized, however it seems clear that no attention was ever paid to whether the men forcibly taken from their work or, sometimes, simply seized on the street were in a fit state to be sent to fight.

Serhiy Haidai, the Head of the Luhansk Regional Administration, reported on 13 August “new methods of forced mobilization”.  These included tricking elderly people in apartment blocks to give them information about men of call-up age in exchange for food or small amounts of money. They also had people waiting outside the entrances to such blocks to catch men of the relevant age.  Haidai noted that most of those engaged in such forced mobilization wore balaclavas when they move around the city to avoid being recognized by the neighbours or acquaintances whom they are hunting down.

The hunt had clearly not resulted in enough bodies to be sent to the frontline, and on 21 August Haidai reported that in some small cities in occupied Luhansk oblast, people had been offered 60 thousand roubles for disclosing the whereabouts of men.  He noted that there were virtually no men left, but the pseudo-republic had ‘a plan’ to be fulfilled on quotas for forced mobilization.

“The Russians themselves don’t want to go into open battle so they continue to collect men on occupied territory who are then thrown into hell.”, Haidai wrote.

It was effectively only on 21 September, after Putin’s announcement of partial mobilization, that Russians began coming out onto the street in any large numbers to protest.  The Kremlin’s calculation had, it would seem, been cynical but accurate. While Ukrainians from occupied territory could be taken by force, and men from poor (and ‘non-European’) Russian Federation republics, as well as convicted prisoners, could be allured with mercenary rates of pay, there were voices of protest, but they could easily be arrested or intimidated into silence.