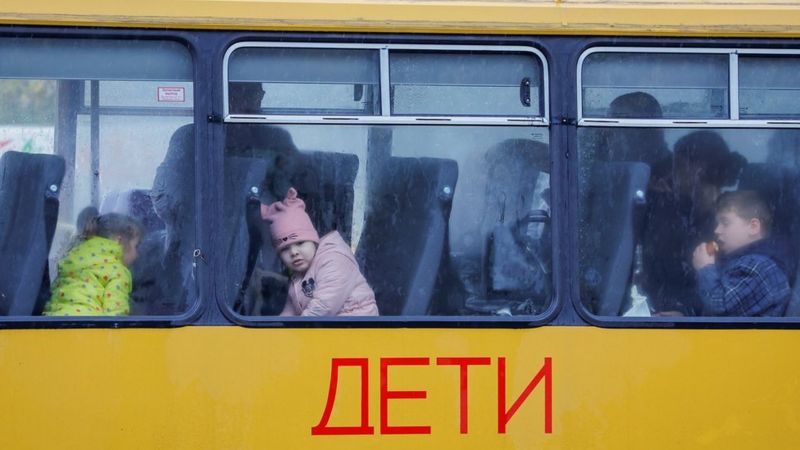 Ukrainian human rights groups have monitored Russia’s kidnapping of children from occupied parts of Ukraine and are in no doubt that such enforced deportation and attempts to turn Ukrainian children into ‘Russians’ are acts of genocide.  Russia is also using children for cynical propaganda purposes, with a new study reporting that many children were apparently adopted’ by Russians only to be ‘returned’, like unwanted goods, when the Russians discovered that they had health problems. The Russian occupation ‘authorities’ are now, at least, carrying out medical examinations first, although the fact that ‘unhealthy children’ get left behind will certainly not be admitted on the propaganda videos about Russians supposedly ‘saving’ Ukrainian children.

According to Kateryna Rashevska from the Regional Centre for Human Rights, as of early December 2022, the Russians had illegally adopted at least 400 Ukrainian children since the full-scale invasion.  This, it should be stressed, refers only to cases that have been fully verified.  The number of children forcibly deported to occupied Crimea or Russia is much larger, with Russia itself having claimed to have ‘evacuated’ as many as 600 thousand children.  Among the 400 children ‘adopted’, some have living parents, and the same is almost certainly true of other children forcibly deported.  Pavlo Lisiansky, Director of the Institute for Strategic Research and Security, notes that Russians are making it difficult to find these children, with many of them having entirely new names foisted on them.  Many of those supposedly ‘evacuated’ to Russia are the children of the men in the Russian proxy ‘Donetsk and Luhansk people’s republics’ who were forcibly mobilized to fight Russia’s war and were either killed immediately or are missing in action.  In many cases, the wives of these men have been forced to go away in order to earn money for the family and have left their children with, for example, grandparents.  The Russian-controlled proxy ‘republics’ have then used so-called ‘commissions’ to strip such mothers of their parental rights and take the children away.

All of this, and much more, has been documented in a report by Lisiansky’s Institute, together with the Eastern Human Rights Group.  In the report Forced Deportation of Children to the Russian Federation, they clearly identify Russia’s deportation of ‘orphans’ as part of its genocide of the Ukrainian people.  One of the motives, they suggest, is the wish by those close to the Kremlin, like former culture minister Vladimir Medinsky, to boost the ‘Slavonic’ part of the Russian population.  The Kremlin Is worried, they believe, that “people of Slavonic appearance” are becoming the minority in the Russian Federation.

It is hardly surprising that there is such unanimity about qualifying Russia’s deportation of children as genocide, since the Convention on the Prevention and Punishment of Genocide could not be clearer.  In naming “acts committed with intent to destroy, in whole or in part, a national, ethnical, racial or religious group”, the Convention specifically names “forcibly transferring children of the group to another group.” [Article II(e)].

Article 50 of the Fourth Geneva Convention prohibits Russia as an occupying power from changing a child's nationality or civil status.  The same Convention prohibits the Individual or mass forcible transfers, as well as deportations of protected persons from occupied territory to the territory of the Occupying Power or to that of any other country, occupied or not.  Although the Convention mentions the possibility of necessary evacuation, this can scarcely justify Russia’s behaviour when the latter actively blocked all routes to safety in non-occupied Ukraine.

Nor can Russia hide behind false claims of humanitarian need, and not only because it is the cause of all such humanitarian tragedies.  In response to Russian leader Vladimir Putin’s 30 May decree on simplifying Russian procedure for adopting Ukrainian ‘orphans’, Asfhan Khan, UNICEF regional director for Europe, “reiterated, including to the Russian Federation, that adoption should never occur during or immediately after emergencies, <> Such children cannot be assumed to be orphans, and "any decision to move any child must be grounded in their best interests and any movement must be voluntary. Parents need to provide informed consent."

Rashevska is not only certain that Russia’s deportation of children is an act of genocide, but also believes that it is potentially one of the easiest such cases to prove.  One can point to specific behaviour, such as the simplifying of Russian legislation to make such deportation possible.  Before the full-scale invasion, Russians could not adopt Ukrainian children without the consent of the competent authority in Ukraine.  All such restrictions were removed, and by 25 May 2022, Putin had issued a decree simplifying the process for gaining Russian citizenship.  By the end of September, he also claimed that large parts of the Donetsk, Luhansk, Kherson and Zaporizhzhia oblasts were now ‘Russia’ and their residents ‘Russian’.   Moscow is, thus, using deportation, ‘adoption’ and imposed citizenship as part of its efforts to eliminate Ukrainian identity.

Intent is also easy to prove with Russia essentially leaving no one in any doubt as to the intent to turn Ukrainian children into Russian citizens, very likely brainwashed into wanting to fight their own real compatriots.  It is equally simply to identify those implicated in such genocidal behaviour, with one of the most active being Maria Lvova-Belova, a Putin protégé and, currently, Russia’s ‘children’s ombudsperson’.   In September, she boasted of how 30 Ukrainian children from Mariupol had been taken to Moscow region. She claimed, on the one hand, that the children had been abandoned by their foster parents, and, on the other, that the children had “said foul things” about Putin and had sung the Ukrainian national anthem and chanted ‘Glory to Ukraine’, “and all that stuff”.  This, it was clear, would be knocked out of them through what she called ‘integration’.