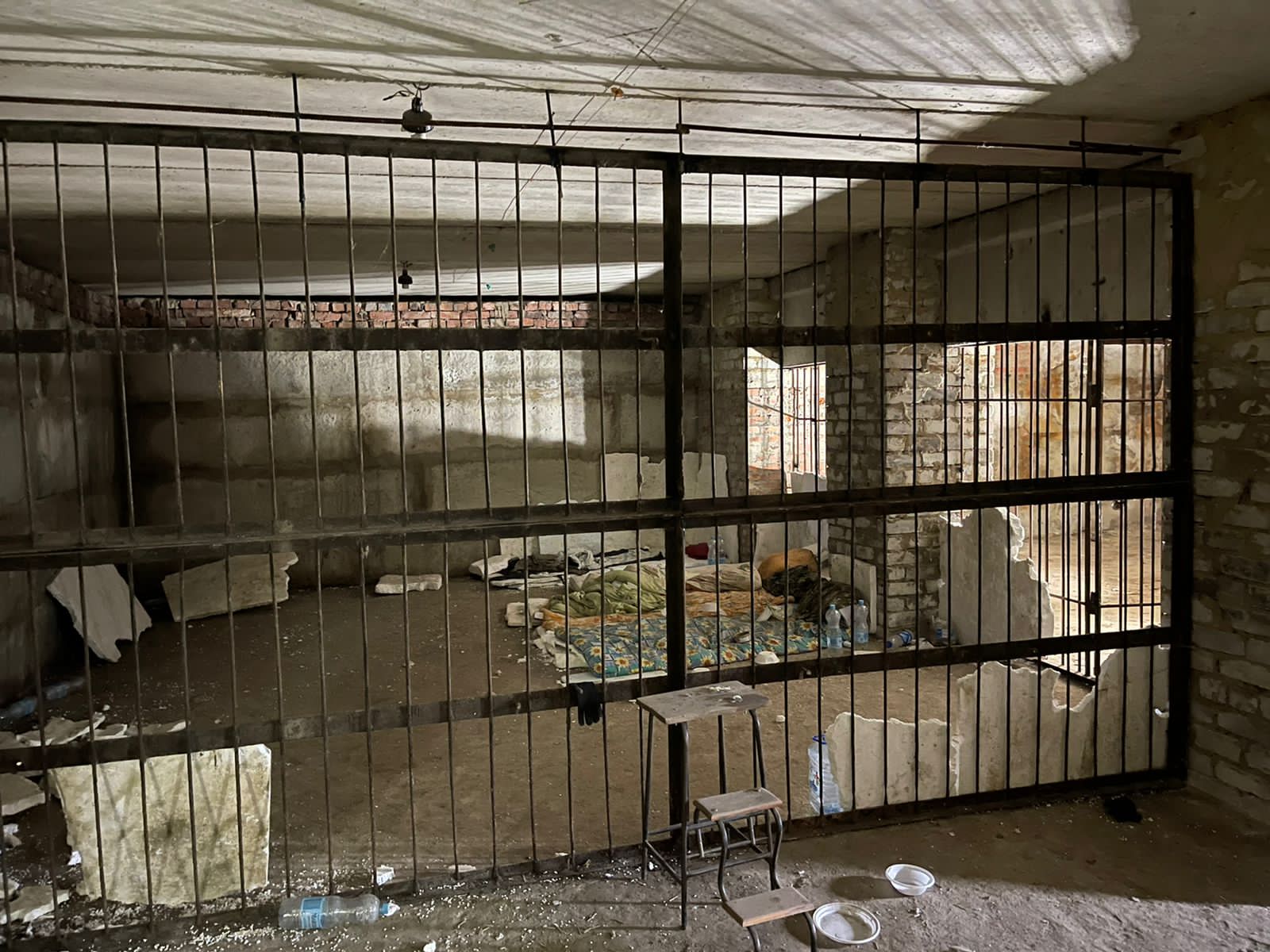 Every populated area in Ukraine which has been liberated after Russian occupation has tales to tell of brutality, torture and disappearances, with those in Kharkiv oblast no exception.  Kozacha Lopan, an urban-type settlement very near the border between Kharkiv oblast and the Russian Federation, was liberated on 11 September after being occupied by the Russian invaders from early March.  Although the population, before Russia’s full-scale invasion, was only around five thousand, the Russians are known to have used several buildings for torturing and imprisoning locals. Several dozen people with openly pro-Ukrainian views disappeared during the occupation and were clearly abducted by the invaders.

The Kharkiv Regional Prosecutor reported on 17 September that the Russian army had created a pseudo ‘police station’ in Kozacha Lopan, with the basement of this building used for torturing those they took prisoner.  As well as incriminating documents regarding this pseudo ‘people’s militia’, investigators have also found a machine which was used in torturing people with electric shocks. Since the criminal investigation was initiated over charges of collaboration, it is, unfortunately, likely that some Ukrainian citizens abetted the invaders.

According to an investigation carried out by the Media Initiative for Human Rights [MIHR], this building was one of at least three premises used for such purposes. 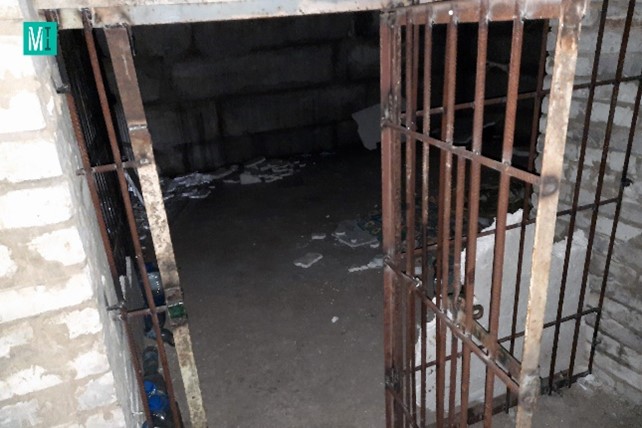 Kozacha Lopan Torture chamber Photo Viktor Kovalchuk, MIHR
The railway station was, MIHR says, “the first stage of torture”.  Local residents have estimated that almost half the population were at one stage held in one of these basements, with the sheer weight of testimony and the number of premises making this seem likely.

There were two rooms which the invaders used for interrogating the people they’d seized.  Such ‘interrogation’ constituted simply beating out supposed ‘confessions’ to crimes, or information that the Russians wanted.

The victims were then taken to other premises, a vegetable loading base and a café where they were imprisoned – and tortured – in the basements.  At the first of these places, the invaders erected a cage in which they held men and women prisoner together.

There was a chair next to the cage which appears to have been used for the ‘interrogations’.  This, if confirmed, would mean that the Russians ‘interrogated’ (tortured) one victim directly in front of others.

Even before Kozacha Lopan was liberated, the Head of the Derhachi hromada [municipality] , Viacheslav Zadorenko had spoken of several premises, including the railway station, being used as torture chambers. In an interview to MIHR just prior to liberation, Zadorenko explained that he had been at his home in Kozacha Lopan when the Russian airstrikes began at 5 a.m. on 24 February. People began trying desperately to evacuate to Kharkiv, meeting along their way the Ukrainian Armed Forces who were, at least, able to prevent the Russians from advancing further.  According to Zadorenko, Derhachi was spared occupation because the Russians proved incapable or reading a map.  They sent around one hundred pieces of military hardware in the wrong direction, with the Ukrainian Army able to destroy a part of the enemy forces.  Other invaders retreated to Kozacha Lopan, from when the horror began for the local population, as it did in several other parts of the Derhachi hromada which the Russians occupied.

There was also mass deportation to Russia of women and children which the invaders tried to present as ‘evacuation’.

Artur Prikhno has been communicating with people who lived through the occupation, and says that the accounts heard are shocking because of the level of brutality which the Russian occupation forces demonstrated

Zadorenko confirms that he received reports of Russian abuses and ill-treatment from virtually all areas.  Although it is the Russian brutality, the torture, enforced disappearances and killings that most shock, other crimes are also very common, including plunder and looting.

MIHR points to a new form of corruption by the occupation forces, with people forced to write over their moveable property to fictitious individuals or entities. Zadorenko, for example, says that he has regularly received reports of this method being used to rob the local population.  He explains that people who were known to have assets were thrown into “a specialized basement”, seemingly at the railway station, where they were beaten, tortured and often held for weeks without food.  Then they would bring a notary from areas under Ukrainian government control, with the person tortured into signing over to a third person property, like cars or agricultural equipment that can be taken away.

Other victims are those hunted by the Russians everywhere: people with a known pro-Ukrainian position; volunteers (for example, those helping to bring humanitarian aid, or perhaps to evacuate people); and former military people. Zadorenko cannot name an exact figure for such abductions, but speaks of several dozen [in Ukrainian ‘tens’].

One young man was finally released and managed to get to government-controlled Ukraine where he is undergoing rehabilitation after the torture he endured.  According to Zadorenko, the Russians used electric shocks and other forms of torture against him because he refused to collaborate.  According to this person, there had been a young woman whom the Russians were holding in the railway station basement, claiming that she had been guiding Ukrainian fire.  The woman had told them that the Russians raped her.  She is also reported to have had fingernails and toenails pulled out.  Zadorenko was speaking with MIHR just before the liberation of the area, and told them that the Ukrainian enforcement bodies had been informed of the above allegations, but that while the occupation continued, there was no possibility of investigating.

The Russians turned the basement of the Tokariv Settlement Council building into yet another such ‘prison’, with the same torture methods used against victims there.

There was mass deportation, with several thousand people taken to the Russian Federation on the guise of supposed ‘evacuation’.  Zadorenko specifically mentions forced deportation from Ruska Lozova, with this aimed at producing a propaganda video for Russian internal consumption.  The elderly, women and children are shown, supposedly being ‘rescued’ by the Russian army from the alleged ‘junta’ in Kyiv.

Zadorenko is also aware of many cases where the Russians, for example, shot at and killed civilians during the issue of humanitarian aid. All of this was deliberate, he said, in order to claim that the Ukrainian Armed Forces had opened fire.

MIHR also spoke with Yury in a camp for displaced people created after the Ukrainian Armed Forces earlier liberated some places, including Ruska Lozova.  He reports that the Russians began searching all homes from 12-14 March, taking away any hunting weapons, as well, clearly as stealing other possessions. Men were forced to undress and ‘checked’ for army tattoos, etc.  Yury recounts that they took some of those searched away.  Where they are now, he says, is unknown.

On the eve of the hromada’s liberation, Viacheslav Zadorenko spoke of around one hundred people having been killed from shelling or airstrikes, with about 300 having been injured.  He clarified, however, that these were figures that did not take into account those killed on territory that had been under occupation from 24 February to early September, and suggested that they can expect horrifying numbers.

The discoveries on the ground in any area that was under Russian occupation have been bad, and investigations are still underway.  There were, nonetheless, moments of immense joy and relief, with one of the most moving videos after the liberation of Kozacha Lopan when Viacheslav Zadorenko arrived, together with the Ukrainian Armed Forces and was met by his mother.

(Updated on 19 September to take into account new information)