Russia abducts and imprisons Crimean Tatar, then tries to mobilize him for its war against Ukraine Wagner PMC convicted killers ‘get clean slate, freedom and pardon" for fighting Russia’s war against Ukraine21-23-year sentences for three Belarusian heroes who helped Ukraine stop Russia from taking Kyiv Russia moves to legislate ‘impunity’ for all war crimes committed in occupied Ukraine Moscow tries to justify its war crimes in Ukraine by glorifying its soldiers as ‘heroes of Russia’ Russian torture was particularly savage in Kherson oblast, with even teenagers imprisoned Ukraine accuses Russia of #Makiivka perfidy through simulated surrender 63 bodies of Ukrainians tortured by Russians already found in liberated Kherson oblast UN demands Russia pays Ukraine reparations as probe into Kherson war crimes begins Russia destroys or damages over 1100 Ukrainian hospitals and plunders othersUkraine’s penitentiary institutions and the warRussian invaders install terror methods of censorship in occupied Zaporizhzhia oblast‘Stand up for your convictions, even if you stand alone!’ Anti-war activities in Russia, 3-9 OctoberUkrainian in occupied Crimea gets harsh prison sentence for calling Russian Guard officer a war criminal and child killer UN Report: Russia used civilians as human shields and carried out summary executions including of a 14-year-old ‘Mogilisation’. Anti-war activities in Russia, 26 September to 1 OctoberPutin admits Russia is deliberately bombing Ukrainian energy infrastructure, playgrounds and apartments out of revenge Russia forcibly mobilizes Ukrainian men in occupied Melitopol and deports women for patriotism Mutilated bodies in Izium mass graves and other atrocities after Russian invaders driven out From a Zwastika to "No to the War". Anti-war activities in Russia, 9-18 September
• Topics / War crimes 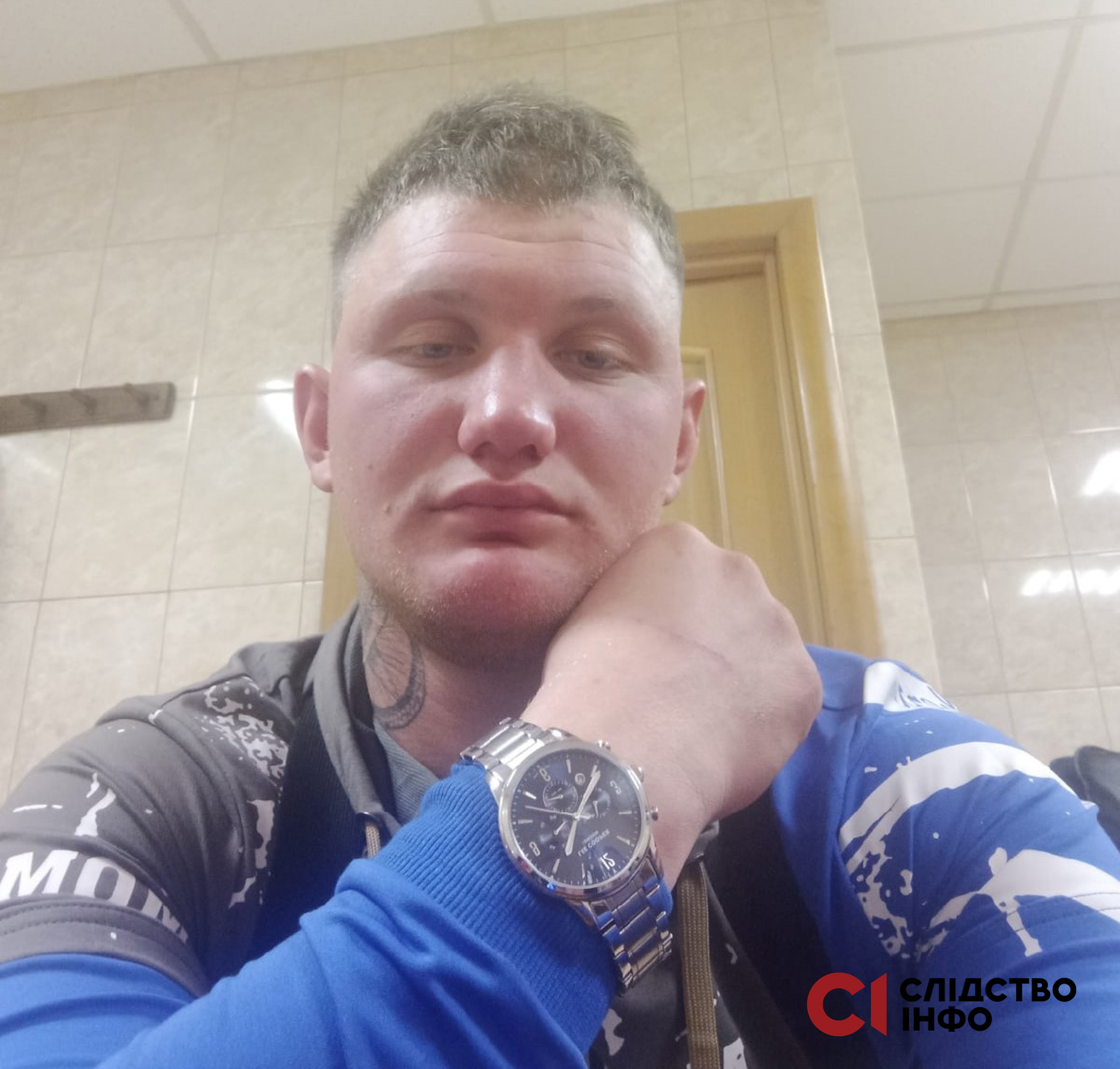 Russia has given the verified confession made by one of its own soldiers based in occupied Avdiivka (Kyiv oblast) even more publicity by lodging absurd criminal charges against him.  Daniil Frolkin, whose admission to killing a civilian in cold blood and other war crimes was corroborated by witnesses, has been charged in Russia with ‘circulating fakes about the Russian army for mercenary motives’.

The criminal proceedings in Khabarovsk, where the 20-year-old former contract soldier is from, were initially noticed by OVDInfo.  This Russian human rights initiative is monitoring Russia’s use of draconian legislation hurriedly adopted just days after the full-scale invasion of Ukraine to silence protest and truthful reporting about the war.  The new articles introduced include Article 207.3 of Russia’s criminal code.  It is parts 2b (as part of a group) and 2g (for mercenary motives) that have been brought against Frolkin, or at least a person with the same first name, patronymic and last name.  Case No. 27GV0001-01-2022-000694-55 was passed to the Khabarovsk Garrison Military Court on 22 December 2022, and is to be heard by judge Anton Brykin. Frolkin’s whereabouts are currently unknown, and it is possible that he is in custody.  If found guilty, and most of the cases brought since Russia’s full-scale invasion end with a conviction, he faces a prison sentence of up to five years.

Frolkin’s confession, as well as information about three other Russian soldiers, were published, and posted on YouTube, by the independent Russian media source, Vazhniye Istorii [Important Stories] in August 2022. The publication has tried to contact him again, asking when the prosecution had been initiated, and what evidence the prosecution had come up with for the specific charges of action by a group and for mercenary motives.  They know that he has read the message (from the journalist, Yekaterina Fomina, who originally interviewed him), but he has not responded.

The prosecution, and likely prison sentence, are almost certainly intended as a threat to other soldiers, including those who, like Frolkin, have resigned or plan to leave the Russian armed forces.  Russian leader Vladimir Putin and the Russian defence ministry have been taking measures to prevent Russian soldiers from revealing Russia’s crimes on social media or from speaking to journalists since soon after the initial invasion of Ukraine in 2014.  Now, a Russian contract soldier has named names in revealing the war crimes of his brigade and its command, and has himself confessed to killing a civilian.

In fact, the evidence against Frolkin was damning even before he admitted to his crimes, and no conviction for supposed ‘fake information’ can change that.  While Russian soldiers essentially plundered everything they could find, they seem to have taken people’s mobiles away in part out of fear that they would be used to tell the Ukrainian Armed Forces where the Russians were.  Among such telephones was that of 76-year-old Leonid Udod.  The Russians used the phone to take photos of each other and, fortunately, left it behind when they retreated.  The phone was found at the end of May by another Avdiivka resident who, thankfully, took it to a humanitarian aid centre, together with the 25 incriminating photos.  In June, the Prosecutor General’s Office announced that criminal proceedings had been initiated against Daniil Frolkin on suspicion of killing an Avdiivka resident; of stealing a car and WWII and other medals from a veteran.  On 17 July, the Ukrainian investigative journalist initiative Slidstvo first reported the evidence against Frolkin (with the video footage presented here).

Then on 15 August, ‘Important Stories’ reported that they had succeeded in identifying four of the Russian soldiers from the 64th motorized rifle brigade, naming, in addition to Frolkin, Dmitry Danilov; Ruslan Glotov and Ivan Shepelenko. They had also spoken with Frolkin who had admitted, on video, to killing a civilian and to looting.

Fomina had travelled to Kyiv oblast and spoken with residents of Avdiivka who confirmed that they recognized all of the men.  She spoke, for example, with the son-in-law of Petro Kravchenko, a veteran of the Second World War, whose war medals Frolkin can be seen wearing on the photos, and which were stolen, together with two TV sets and numerous other appliances from the elderly man’s home.  Nor is there only witness testimony of Frolkin’s involvement, as the Russians left their uniforms when they retreated, and there are trousers with Frolkin’s name tags.

The residents Fomina spoke with recognized all of the men on the photos as well as at least one, Alexander Chiryasov, who is known to have also been in the 64th motorized brigade (and may have been killed).  All had tales to tell of how the invaders looted homes, in one case even stealing a bra.

This, however, is not the worst, as 13 men from the village were found murdered, all with gunshot wounds.  Some other men are still missing, and may also have been killed.

Two of the soldiers from the 64th motorized brigade agreed to speak with Fomina – Frolkin and Dmitry Danilov, whom local residents said had been referred to by the Russians as ‘sniper’.  Danilov essentially denied any wrongdoing, while Frolkin accused the brigade commander Azatbek Omurbekov of looting on a major scale, while largely denying that he and his fellow contract soldiers were involved.  He also denied any involvement in the killing of civilians.

Then, shortly afterwards, Frolkin phoned the journalist again, admitted in detail to the killing and to looting.  He went on to name all of those in the military command whom he believed should face liability for their crimes (Azatbek Omurbekov; lieutenant colonel Dmitrenko; the brigade’s chief logistics officer colonel Klobukov, and chief reconnaissance officer lieutenant colonel Romanenko.  He further accused lieutenant colonel Andrei Prokurat of having issued the order to kill civilians (literally, “to dispose of them”).

The killing, he said, had been some time in March when he and some other soldiers had accompanied Prokurat to three homes in Avdiivka.  Prokurat took money from one of the houses, handed over papers and phones to the soldiers and told them to “dispose of” the civilians.  Fomina believes the three victims to have been Vadym Haniuk; Vitaliy Kubukevych and Ruslan Yaremchuk, and that Frolkin probably killed Yaremchuk. He claimed to be sure that Yaremchuk had passed on the whereabouts of other Russian soldiers and, when prompted by Fomina, agreed that he had killed him in revenge.  He further asserted that this was the only person that he had killed in all seven months of his involvement in the war (until his resignation in July) and that he supposedly killed this Ukrainian civilian because he “wanted to save as many soldiers as possible.”

How true or otherwise his version of the killing was, Frolkin does appear to have understood the likelihood that he would be imprisoned for the information he was revealing.  He made it quite clear that this was not accountability for the crimes he had committed in Ukraine (up to life imprisonment), but for telling the truth back in Russia.

As reported earlier, members of the 64th motorized infantry brigade are suspected of having committed many of the atrocities in Kyiv oblast discovered after the Russians retreated.  This did not stop Putin from issuing a decree on 18 April honouring the members of this brigade for their supposed ‘mass heroism and daring, tenacity and courage”.