Russia plans huge propaganda New Year tree in Mariupol while residents freeze in bombed city Russia destroys the centre of Mariupol to conceal its war crimes while leaving residents to die of the coldRussia reserves housing and warmth for its military and collaborators in devastated MariupolEven Kremlin supporters admit Russia has created ‘a humanitarian disaster zone’ in occupied Ukrainian cities Russia razes Ukrainian city to the ground and says ‘there’s no point’ to rebuilding it Russia killed Inna’s husband, destroyed her home and give awards to the killers for ‘liberating’ MariupolRussian invaders strip Ukrainians of their property rights in occupied Mariupol Russian invaders demand Ukrainians have ‘filtration’ stamps and permits to live in their own citiesRussia sends relatives of Ukrainian soldiers and other Mariupol residents to ‘concentration camp’ in occupied DonbasHorrific conditions and torture in Russian filtration camp ‘ghetto’ for Mariupol residents Hospital bombed by the Russians at Azovstal as more mass graves found near Mariupol Mass grave near Mariupol could contain up to nine thousand victims of the Russian invaders Russia plans total ‘filtration’ of Mariupol men and forced ‘mobilization’Russia destroys Mariupol and tries to get illegally deported residents to move to Siberia Russia accused of using mobile crematoria to hide its war crimes in Mariupol At least 50 Ukrainians were burned to death in Russia’s bombing of Mariupol hospitals Russian FSB produce ‘refugee’ propaganda video blaming Ukrainian soldiers for Russia"s war crimes in Mariupol Russia continues bombing Mariupol while producing propaganda videos about its ‘humanitarian aid’Russia responds to International Court order to stop bombing Ukraine by destroying Mariupol Theatre sheltering familiesRussian invaders take Mariupol intensive care hospital and its patients hostage
• Topics / War crimes 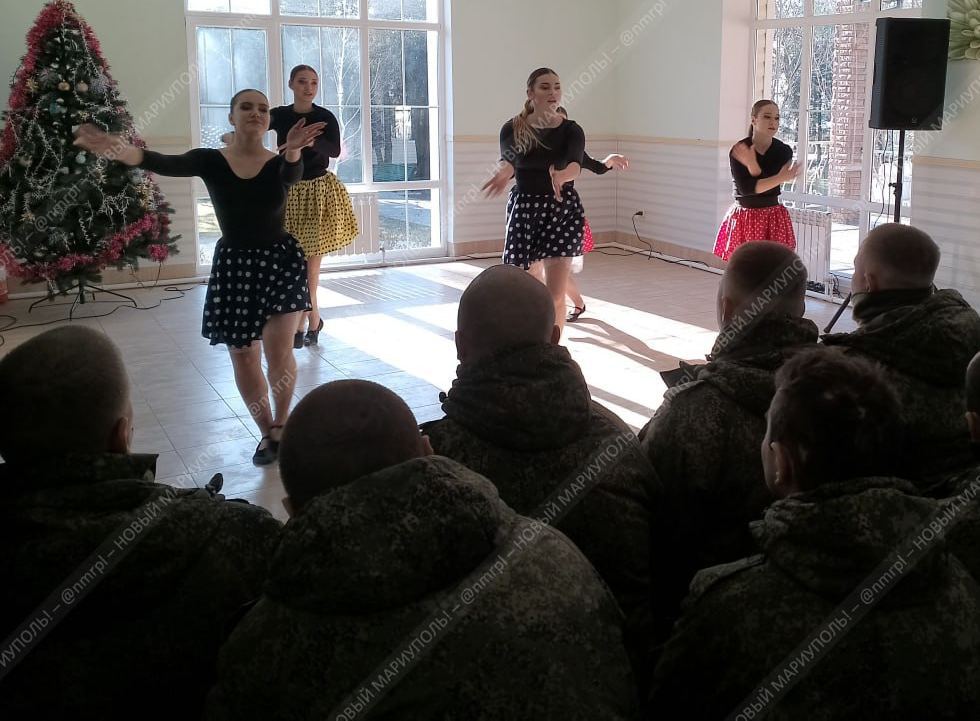 Children and young people in Russian-devastated Mariupol have been forced to perform in front of Russian soldiers, with parents threatened with serious consequences if their children did not take part in this cynical farce.  The New Year / Christmas event was reported on 9 January 2023 by Petro Andriushchenko, Adviser to the Mayor of Mariupol and by Mariupol Today, with the latter noting that parents had also been prohibited from filming the event.  Mariupol was the first Ukrainian city that Russia systematically destroyed after its full-scale invasion and it has made little effort since to do anything but destroy the evidence of its war crimes.  While the surviving population continue to freeze in apartments without heating, and often without electricity or running water, Russia has concentrated largely on Potemkin village propaganda stunts and on instilling its methods of indoctrination.

Andriushchenko reported that the children had been forced “to thank the killers of their parents, relatives and their childhood. To thank them and entertain them with shows. Parents were warned that anyone who was against, or who filmed it, faced [being imprisoned in] basements for the dissatisfied.”  If there were still any depths to which the invaders had not reached, then these had today been plummeted, he wrote.

Children probably do need some distraction from the dark reality of their everyday life, but not for propaganda, and certainly not to titillate the soldiers who clearly formed the audience for this event.

The reality could scarcely be darker.  The Mariupol City Council reported on Monday that they had received a letter from a Mariupol woman whose father had died of a stroke on 7 January.  She says that the hospitals are overcrowded and that the staff are refusing to admit people.  The morgues are also unable to keep up with the number of bodies they need to collect.  Her father had needed urgent treatment, but the hospital had refused to hospitalize him, saying there were no beds. “They left him at home.  You could say that they did nothing, just prescribe some bills or other. On 7 January he died. They only took his body to the morgue at 5 o’clock in the evening of 8 January. I asked the woman why and she answered that there were a huge number of deaths at the weekend and the morgue can’t keep up with collecting them”.

The Council accuses the Russian occupiers of “real genocide of Mariupol residents”, with no conditions for treating people in the city. There are also dangerous fires all the time in apartment blocks because the aggressor state has failed to fix electricity supplies after its relentless bombing and shelling. Without centralized heating, people are forced to use electric heaters or gas burners, with this leading inevitably to fires.  The Council reports that in December alone there were over 60 such fires, which killed nine people.

At the end of December 2022, Andriushchenko reported that the death rate among the population of Mariupol was eight times what it had been before Russia’s full-scale invasion.  He said that deaths from natural causes had doubled since November.  People are freezing in their unheated homes, he said, and added that there had been no water in the city for two weeks, with people forced to gather water from puddles.

“The situation is extremely close to a humanitarian catastrophe. There are huge problems with heating. The centralized heating system has not been restored in most of the city. Only 30% of the people at most have been connected to centralized heating.”

An entirely different version of reality is, of course, presented by the Russian state-controlled media or that of the Russian proxy ‘Donetsk people’s republic’.  This is not, however, a question of two possible alternative interpretations.  There is ample video footage on the ground, showing huge queues on the street for bread, a bit of warm food, or heaters, and even the local media has been unable to pretend that the problems with people freezing in unheated apartments do not exist.

There has also been ample coverage from western journalists and Maxar technologies satellite images since the beginning of the full-scale invasion, with these providing vital evidence of the crimes committed, the deaths and devastation caused.

On 23 December 2022, Associated Press published an important study, based on personal interviews with people in Mariupol.  The title said it all “Russia scrubs Mariupol’s Ukraine identity, builds on death”.   The report speaks of how “Russian soldiers, builders, administrators and doctors are replacing the tens of thousands of Ukrainians who have died or left.

“Eight months after Mariupol fell into Russian hands, Russia is eradicating all vestiges of Ukraine from it – along with the evidence of war crimes buried in its buildings, such as the famed Drama Theater where demolition started Thursday.”

But the AP investigation into life in occupied Mariupol also underlines what its residents already know all too well: No matter what the Russians do, they are building upon a city of death. More than 10,000 new graves now scar Mariupol, the AP found, and the death toll might run three times higher than an early estimate of at least 25,000. “