Russia razes Ukrainian city to the ground and says ‘there’s no point’ to rebuilding it Russia killed Inna’s husband, destroyed her home and give awards to the killers for ‘liberating’ MariupolRussian invaders strip Ukrainians of their property rights in occupied Mariupol Russian invaders demand Ukrainians have ‘filtration’ stamps and permits to live in their own citiesRussia sends relatives of Ukrainian soldiers and other Mariupol residents to ‘concentration camp’ in occupied DonbasHorrific conditions and torture in Russian filtration camp ‘ghetto’ for Mariupol residents Hospital bombed by the Russians at Azovstal as more mass graves found near Mariupol Mass grave near Mariupol could contain up to nine thousand victims of the Russian invaders Russia plans total ‘filtration’ of Mariupol men and forced ‘mobilization’Russia destroys Mariupol and tries to get illegally deported residents to move to Siberia Russia accused of using mobile crematoria to hide its war crimes in Mariupol At least 50 Ukrainians were burned to death in Russia’s bombing of Mariupol hospitals Russian FSB produce ‘refugee’ propaganda video blaming Ukrainian soldiers for Russia"s war crimes in Mariupol Russia continues bombing Mariupol while producing propaganda videos about its ‘humanitarian aid’Russia responds to International Court order to stop bombing Ukraine by destroying Mariupol Theatre sheltering familiesRussian invaders take Mariupol intensive care hospital and its patients hostage Mass graves of the Ukrainian civilians Russia claims it is not killingTerror and abductions as Russia tries to break Ukrainian resistance in Kherson and other occupied citiesUkrainian journalist Oleh Baturin feared abducted by Russian invaders in Kherson oblast Mayor of Melitopol Ivan Fedorov abducted after refusing to collaborate with the Russian invaders
• Topics / War crimes 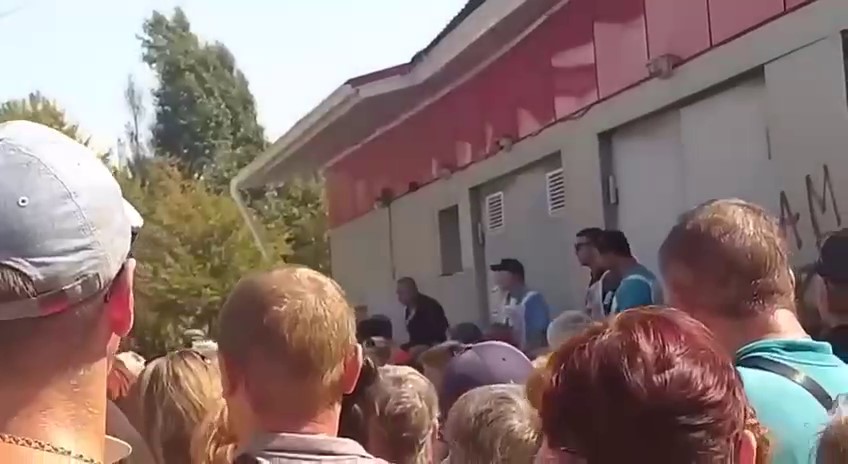 Residents of the Ukrainian cities in Donbas which Russia virtually razed to the ground while claiming to 'liberate'  are facing humanitarian catastrophe this winter with Russian officials “incapable” of rebuilding what Russia has destroyed.  Although the cities’ elected leaders have long spoken of the danger, the above warning came from Ihor Dimitriev, a former Odesa City Council deputy from the pro-Russian ‘Rodina’ party who threw in his lot with the aggressor state back in 2014.

While the weather remains reasonably warm, it is possible for people, for example, in occupied Sievierodonetsk, Lysychansk or Mariupol, to cook and wash in the street, while hobbling some kind of existence in the ruins of their homes.  That could change very soon, with the lack of electricity, running water and heating, as well as the dangerous conditions of many bombed apartment blocks, a real threat to life.  Even where the Russian invaders have had time to resolve the most burning issues, this has clearly not been done.  At the end of August, the Mariupol City Council posted a video of a near revolt in the city after the Red Cross tried, in the face of an overwhelming crowd, to cancel the issue of humanitarian aid.  After besieging Mariupol for many months and blocking Ukrainian supplies of humanitarian supplies, Russia has now left residents dependent virtually solely on the Red Cross.  It is likely that some ‘humanitarian aid’ is being sent from Russia – and syphoned off by those now controlling the city.  Except, of course, for that which they show being distributed by smiling Russians in the propaganda videos which officials from Moscow are adept at organizing.

All of the above is confirmed in recent posts on his Telegram page by Ihor Dimitriev.  He can certainly not be suspected of pro-Ukrainian sentiments, although his blunt honesty may well get him arrested in the ‘Russian world’ to which he switched allegiance.

On 31 August, Dimitriev also posted the videos from angry Mariupol residents.  He called this the first revolt of the hungry in Mariupol, but not the last.

He then followed with the comment that, as he had said even before Russia’s full-scale invasion, “Russian officials are simply not capable of organizing normal life in the new territories.  Not because they’re fools (although more often than not that too), but because the entire system of management is aimed not at working through challenges and carrying out new projects, but at stability and control.”

“For that reason, I think that the new territories will, in winter, become a humanitarian disaster zone. No restoration of heating and plumbing is taking place in many of the populated areas that suffered.  The restoration of residential buildings is largely taking place only for appearances – on the main streets, they’ll erect beautiful apartment blocks.”

Dimitriev goes on to explain that there are battles raging – between the Russian proxy ‘Donetsk and Luhansk republics’, the parts of the Russian Federation who formally ‘expressed the intention’ to help restore Donbas and “the Chechens” - for allocation of Russian state contracts.

In the meanwhile, residents have nothing to live on, with benefits, etc. provided by the Ukrainian state not available, and any Russian help thin on the ground.  Even the (pitiful) 10 thousand roubles proposed by Russian leader Vladimir Putin “have largely vanished somewhere).  Small-time business could have helped, but Russia can’t cope with that.  One of the first things the invaders did after seizing Melitopol (Zaporizhzhia oblast) was to ban street vendors.  In occupied Kherson, they appropriated goods, claiming their sale to be “illegal trading”.

Those, Dimitriev says, who “fantasize” about Ukraine falling this winter from the cold and from hunger should understand that it will not be Ukraine that suffers in the first instance.

A few days later, Dimitriev returned to this subject, focusing specifically on Sievierodonetsk, one of the cities in the Luhansk oblast that Russia seized after mass bombing and shelling.   He acknowledges that of more than 800 apartment blocks in Sievierodonetsk, most are damaged, with less than half able to be restored.  There is no gas, nor heating.  There is also no electricity or running water, though he says that “some percentage” of the blocks may be able to be connected to these services by the winter.   One of the reasons for delay, he explains, is that there was a fight for Russian state contracts between people from Perm (Siberia) and Ingushetia.   Residents are trying to insulate basements themselves, and are still cooking outside, with the Russian emergencies ministry erecting the same mobile ‘saunas’ (i.e. places to wash) as in Mariupol and other devastated cities.

All of this, it should be stressed, is fully in line with the reports and photos made public by the legitimate local authorities, and by commentators like Denis Kazansky (who first drew attention to Dimitriev’s posts).  Nor is Dimitriev the first supporter of Russia’s aggression to have spelled out the truth.  For a long time, Russia and its proxy ‘Luhansk republic’ [‘LPR’] claimed to have ‘liberated’ Popasna and promised to rebuild the city they had destroyed in this ‘liberation’ process.  Then on 9 August, Kremlin-installed ‘LPR leader’ Leonid Pasechkin openly stated that “there is no particular point” to rebuilding it.

Moscow appears to have two, related, responses to the humanitarian catastrophe it has inflicted upon Ukraine.  One is straight propaganda.  Even before the invaders finally destroyed and seized all of Mariupol, they were erecting screens on which to broadcast propaganda.  It is known also that the FSB has been forcing residents taken against their will to occupied Donbas or Russia to produce videos or sign ‘statements’ claiming that Ukrainian defenders committed Russia’s war crimes and bombed civilian targets.

Even Dimitriev noted a second, less effective, method in Russia’s propaganda campaign for its pseudo-referendum on joining Russia.  It is particularly odd, he says, that the focus in this campaigning is on “historical unity”.

“A campaigner, some kind of ardent Moscow lad comes to the father of a family and says: “Would you like to discuss our Russian empire?”

He is answered: “Better to talk about deliveries of coal and food”.

The lad responds: “With respect to that, I can’t help.  But in the Russian empire before the revolution, there were great deliveries of food and fuel!”

It remains to be seen whether Dimitriev finds himself arrested, either for ‘discrediting the Russian army’ or on some other, inexplicable, charge.  Any other real reaction to the situation that he describes seems less probable.