Silence abets Russia in torturing and risking the lives of Ukrainian hostages and POWs in occupied DonbasRussia kills Minsk Agreement, with lives of over 300 Ukrainian hostages and POWs in danger Russia is already holding many Ukrainian POWs without any declaration of warRussian-controlled militants ‘sentence’ Ukrainian soldier to 17 years for defending Ukraine POWs tortured for defending Ukraine in Donbas and for Russian propagandaDefender of Ukraine seized and tortured for Russian and Donbas militant propagandaPrisoner exchange leaves most Donbas hostages in captivity and makes journalists suspiciousDesperate plea to Zelensky from relatives of hostages once again forgottenRussian-controlled Donbas militants finally free severely disabled pensioner but not her invalid sonFour Russian invaders sentenced to 11 years for torturing hostages in Kharkiv oblast Kherson journalist, imprisoned by the Russians, tells of killing, rape and torture of hostages Former child hostage spends 7th birthday in Russian captivity for wanting to live in free Ukraine Russia uses Kherson ‘evacuation’ for enforced disappearance of more Ukrainian hostages and POWs ‘Guilty’ of being Ukrainian: Teacher abducted by the Russian invaders and held incommunicado for six months Abducted 16-year-old was forced to clean up after Russian invaders" torture of Ukrainian POWs and hostagesRussia abducts 25 volunteers delivering humanitarian aid to Mariupol, threatens to put them ‘on trial’ Russia extends terror and abductions from occupied Crimea and Donbas to all of Ukraine Russian invaders torture and threaten to kill civilian hostage in revenge for their military losses Ukrainian POWs and abducted civilian hostages illegally imprisoned in Russian-occupied Crimea Russian invaders abduct Mayor of Prymorsk Oleksandr Koshelevych after first taking his elderly father hostage
• Topics / War crimes
• Topics / The right to liberty and security 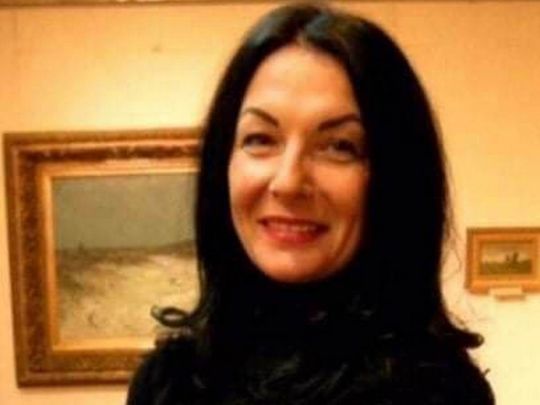 Ukrainian Olena Piekh has spent her fifth Hannukah in Russian captivity, accused of ‘committing state treason’ with respect to a non-existent, Russian puppet ‘republic’.  Her 13-year sentence was passed by an unrecognized ‘court’ after Olena was subjected to horrific torture to force a signed ‘confession’ to committing such surreal treason.

Russia’s full-scale invasion of Ukraine has massively increased the number of Ukrainian civilian hostages abducted and illegally imprisoned by the aggressor state.  The abductions, the torture and grotesque ‘trials’, however, began much earlier, in the Russian proxy ‘Donetsk and Luhansk people’s republics’ [‘DPR / LPR’], as well as in occupied Crimea. There may be few new headlines when it comes to hostages like Olena Piekh, but that does not mean their plight does not need publicity.  Quite the contrary, as Izabella Piekh explains. Both the full-scale war, and her mother’s deteriorating state of health have put the latter’s life in ever greater danger.

51-year-old Piekh suffers from epilepsy, as well as resistant hypertension and severe angina.  It was clear a year ago that she urgently needed hospitalization and specialist treatment.   Although some of her medical issues preceded her seizure by so-called ‘DPR militants’ in August 2018,  her condition was certainly exacerbated by the electric shocks, the screws twisted into her knees, asphyxiation and mock executions used to force her ‘confession to treason and spying’.  She still suffers acute pain in her leg and cannot walk without a stick.

Until Russia’s military aggression in 2014, Piekh worked as a senior researcher in the research and educational department of the Horlivka Art Museum and authored several papers for the museum’s official publications.  She left the Donetsk oblast, together with her daughter, after Horlivka was seized by Russian / pro-Russian militants.  They settled in Odesa, where Piekh, who had earlier also taught German and Russian, earned a living through translations.

Piekh was, however, forced to travel to occupied ‘DPR’ because her elderly mother, who had remained in occupied Debaltseve, had suffered a stroke in January 2015 and needed long-term treatment and rehabilitation. Piekh needed to make trips to occupied territory in order to organize and pay for such treatment.

It was during one of these visits that Piekh was seized by the militants.  They turned up, brandishing machine guns, on 9 August 2018 and turned the flat upside down, before taking Piekh away, with a bag over her head.  For a long time, Izabella searched in vain for information about her mother’s whereabouts and only learned later that Piekh had been held for three months in a military unit.  That was when the militants systematically tortured her, driving her to attempt suicide, by trying to cut her wrists.  The attempt was thwarted and did, at least, lead to her torturers holding off for a while.  Then, however, the Russian in charge of the torture turned up in her cell, and managed to extract the supposed ‘confession to state treason’ that they demanded of her.  The charge is truly surreal since, as Izabella points out, her mother is a citizen of one country alone, Ukraine.  She could not, and would not, betray Ukraine, her motherland and home.

The representatives of an aggressor state whose leader has claimed that Russia’s aim is the ‘denazification’ of Ukraine also subjected Olena to foul displays of antisemitism.

On 25 October 2018, Piekh was taken to the Donetsk SIZO [remand prison] and initially charged with ‘spying’, although that was later changed to ‘planning a crime on the territory of DPR’ and “state treason”.   It was claimed that she had worked with Ukraine’s SBU [Security Service] and had “incited people to spy” by recruiting fighters and sending them to government-controlled Ukraine.  The SBU program ‘They’re waiting for you at home’ referred to has nothing to do with recruitment, but is an opportunity for Ukrainians who became involved with ‘DPR’, but did not commit any serious crime, to return to government-controlled Ukraine with the slate set clean.

Olena Piekh was ‘sentenced’ by an illegal ‘court’ on 27 March 2020 to 13 years for ‘spying and treason’.  Her abduction, torture and the eventual travesty of a trial had all been carried out by an illegal armed formation entirely under the control of Moscow.  At the time, Russia was pretending that this puppet entity was ‘independent’ but had still held off formally recognizing it.  The pretence was largely dropped in February 2022, with Russia since having claimed that the occupied parts of Donetsk oblast, referred to as ‘DPR’, are now part of the Russian Federation.

In fact, Olena Piekh’s imprisonment, and the fate of a woman in seriously bad health, always depended on Russia.  Assistance with publicizing the information here can help ensure that pressure is placed on Russia to release Olena, and the other hostages for whose lives Russia bears direct responsibility.

See also: Silence abets Russia in torturing and risking the lives of Ukrainian hostages and POWs in occupied Donbas