The Face of Russian terror against Crimean Tatars 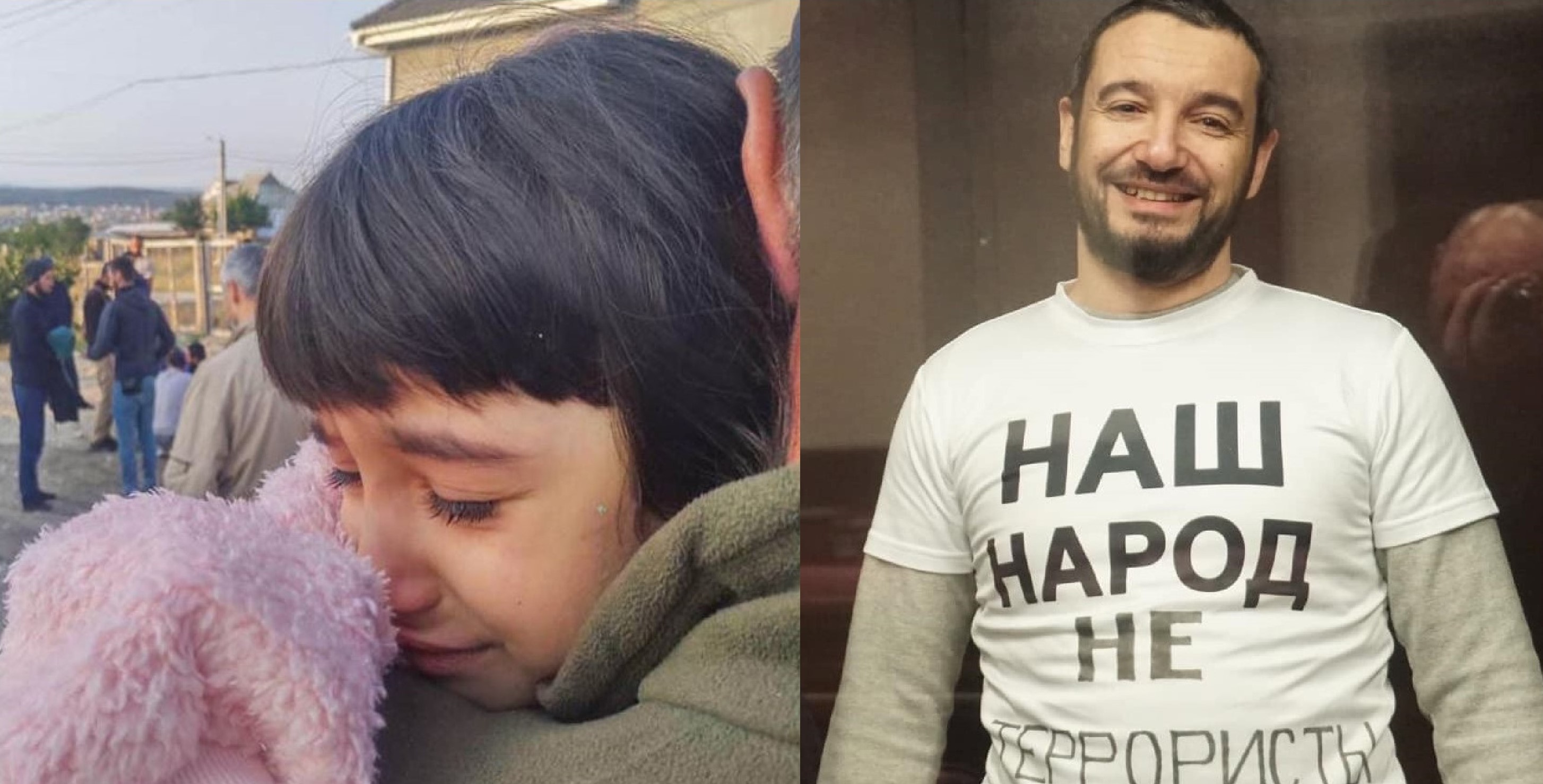 Derya Fevzieva crying inconsolably after her father was taken away by armed men on 17.08.2021, Raif Fevziev in court on 12.01.2023 in a T-shirt reading ’Our people are not terrorists’ Photos Crimean Solidarity

A Russian court has sentenced Raif Fevziev, a Crimean Tatar local imam, or religious leader and civic activist to 17 years’ harsh-regime imprisonment.  The sentence, which, as his lawyer noted, is longer than Russian courts hand down for murder, was for a discussion on Islam seven years ago. The fabricated charges were then embellished by the ‘testimony’ of two secret ‘witnesses’ who had probably never set eyes on Fevziev before the trial.

Even by the extremely low standards of Russia’s Crimean political trials, the charges against Fevziev seem surreal. The point is not even that Fevziev was charged with ‘terrorism’ although accused only of involvement in Hizb ut-Tahrir, a peaceful transnational Muslim organization which is legal in Ukraine and which is not known to have committed acts of terrorism anywhere.

Now 42, Fevziev was arrested on 17 August 2021 with armed men bursting into his home very early in the morning, terrifying his two sons and small daughter who saw their father treated violently and taken away in handcuffs.  The FSB prevented Fevziev’s lawyer from attending, doubtless because they had brought the religious literature with them that they claimed to have ‘found’ among pots in the kitchen. The FSB have become notorious, not only for planting religious literature during such ‘searches’, but for placing them in places where no devout Muslim would think of holding religious books.

As mentioned, the entire ‘case’ was based around an illicitly taped conversation on religious issues back in December 2015, in Fevziev’s own home. Fevziev himself is convinced that his arrest and imprisonment were because of his active role in supporting other victims of political and religious persecution in Russian-occupied Crimea.  Fevziev held prayer services on the eve of politically motivated sentences and also attended political ‘trials’.

The indictment itself would seem comical were the intention not to imprison a man who has committed no crime for up to two decades.  The ‘investigators’ claimed that “from a date which the investigation has not established”, but no later than 11 December 2015 [i.e. the date of the illicitly taped conversation on which the case hinges], a Hizb ut-Tahrir group was functioning in the Simferopol raion.  Not one member of this alleged ‘group’ has been identified, yet the FSB claim that Fevziev was its ‘organizer’

This Kafkaesque indictment goes on to assert that from some equally unknown point, but no later than 11 December 2015 and before his arrest on 17 August 2021, Fevziev “carried out covert anti-Russian, anti-constitutional activities, in the form of propaganda work among the population, encouraging local residents to take part” in the alleged, and entirely unproven, Hizb ut-Tahrir group. It is further assertedthat Fevziev led this ‘group’, ran conspiratorial meetings of its unidentified members. sought to recruit others in it, etc.

The only ‘evidence’ for any of these assertions came from two anonymous ‘witnesses’ referred to by the pseudonyms F. Ismailov and R. Abdullayev. Both of these individuals gave ‘testimony’ that essentially parroted the indictment, but were unable to sensibly answer any questions put by the defence. Ismailov, for example, ‘Ismailov’ claimed to have met Fevziev who invited him to meetings which he attended until 2017 when he stopped, supposedly having learned that Hizb ut-Tahrir was ‘a terrorist organization.’  Even more implausibly, it is alleged that a full four years later, in 2021, he wrote a report to the FSB regarding Fevziev and calling the latter the organizer of a Hizb group.  Considering how remarkably good his ‘memory’ would appear to be on such points from the indictment, he claimed either that he ‘doesn’t know’ or ‘doesn’t remember’ when asked virtually any question by the defence.

In all such ‘trials’, the court invariably allows secret witnesses, despite the lack of any grounds for such secrecy and withdraws questions from the defence aimed solely at demonstrating that the alleged ‘witnesses’ are lying.

Since Russia forcibly dissolved the important Memorial Human Rights Centre, the latter’s functions in monitoring persecution have been carried out by the Memorial Help Political Prisoners initiative.  This initiative has declared Fevziev a political prisoner.  The many reasons include the lack of any grounds for labelling Hizb ut-Tahrir ‘terrorist’ and the fact that the entire prosecution is based on the ‘evidence’ of two secret witnesses and an audio recording from 2015 (as the sole evidence to justify his arrest six years later!)

The obvious absurdity of the charges and the gross flaws in the ‘evidence’ were all ignored by the ‘judges’ – Viacheslav Alekseevich Korsakov (presiding), Denis Aleksandrovich Galkin and Igor Viktorovich Shendrikov from the Southern District Military Court in Rostov (Russia).  On 12 January, they convicted Raif Fevziev of the charges and sentenced him to 17 years, as had earlier been demanded by the prosecutor.  The first three years of this sentence are to be spent in a prison, the worst of Russia’s penitentiary institutions, with the rest in a harsh-regime prison colony.  After his release, they ordered a further 18 months restriction of liberty.

Raif Fevziev is likely to remain imprisoned in Rostov until after the appeal hearing.  Please write to him and help to ensure publicity for this shocking case!

Letters need to be in Russian, and on ‘safe’ subjects.  If that is a problem, use the sample letter below (copying it by hand), perhaps adding a picture or photo. Do add a return address so that Raif can answer.