Russia moves to legislate ‘impunity’ for all war crimes committed in occupied Ukraine Moscow tries to justify its war crimes in Ukraine by glorifying its soldiers as ‘heroes of Russia’ Russia forces Mariupol children to knit socks for soldiers in Ukraine to kill UkrainiansRussia plans special propaganda ‘lesson’ explaining to children in occupied Ukraine why the bombing of their cities is ‘liberation’Russia teaches Mariupol children to shoot and to hate Ukraine Invaders threaten to take children away if parents don’t send them to be indoctrinated ‘to love Russia’ Teachers in occupied Kherson refuse to collaborate with Russian occupiers Russia uses terror and abduction in attempt to force schools to collaborate in occupied Melitopol Mayor of Melitopol Ivan Fedorov abducted after refusing to collaborate with the Russian invaders Russian priest arrested and prosecuted for sermon opposing Russia’s war against Ukraine Russia effectively admits it deliberately bombed the maternity hospital in Mariupol that killed three patients, including a childRussia brings grotesque propaganda to Berdiansk after Ukrainian journalists refuse to collaborate Russian invaders murder Ukrainian volunteers Impassioned appeal from Ukrainian Muslim leader in face of Russia’s war to destroy Ukraine Russia is forcing Ukrainians from occupied Crimea and Donbas to fight in its invasion of Ukraine Children among the dead after Russian invaders opened fire on fleeing civilians Russia installs its propaganda TV after seizing Kherson and imposes 15-year sentences for reporting its invasion of UkraineUkrainian survivors of the Holocaust demand Putin and Russia get out of Ukraine Russia continues its carnage, flouting binding order from ECHR to stop bombing civilians in UkraineBabyn Yar bombed by Russia, 80 years after Nazi Massacre of Ukrainian Jews
• Topics / War crimes 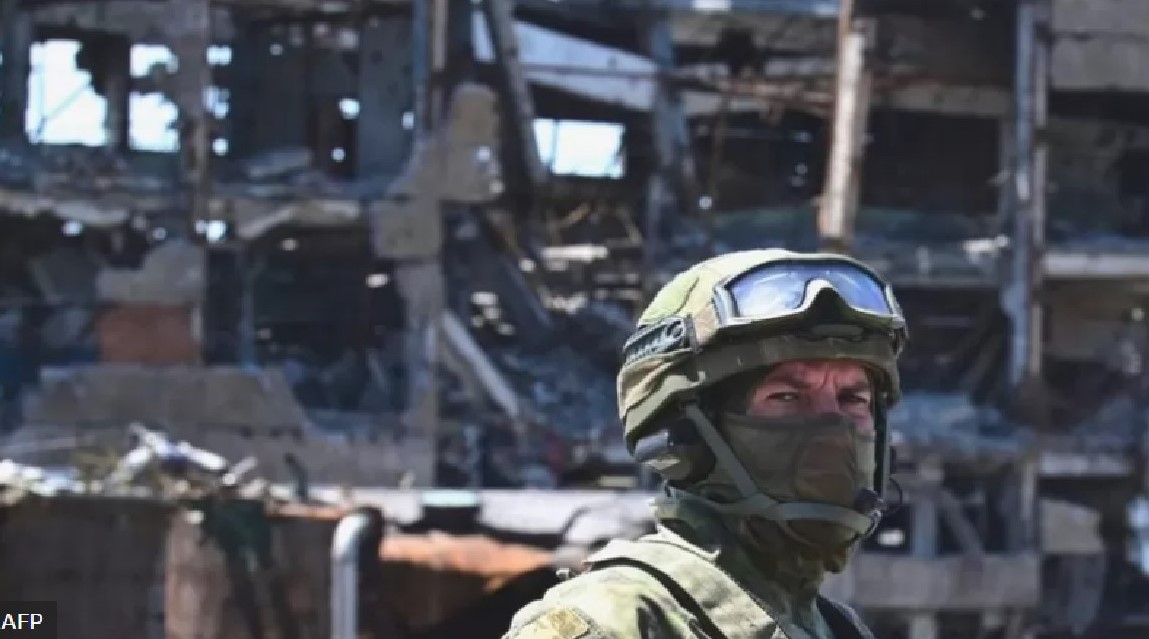 While Germany cites fear of ‘escalation of the conflict’ to justify its refusal to help Ukraine drive out the aggressor state, Russia has already begun forcibly integrating occupied Ukrainian territory.  It is planning to impose its imitation of a justice system on occupied parts of the Zaporizhzhia and Kherson oblasts, with the first Russians imported to head such pseudo ‘courts’.  The moves, reported by the Centre for Journalist Investigations [CJI], come while Russia is also looking set to pass ‘legislation’ which would overlook any war crimes committed in Ukraine were these deemed to have been committed in Russian’s interests. Russia is also holding a huge number of Ukrainian civilian hostages in captivity, denying them their rights under international law.

Russian leader Vladimir Putin ‘formally’ annexed occupied parts of the Donetsk, Luhansk, Kherson and Zaporizhzhia oblasts on 30 September 2022, and within two months was already threatening their ‘integration’ into Russia’s legal system.  A State Duma draft bill on ‘the creations of courts in the Zaporizhzhia oblast’ passed its first reading on 20 December 2022, while an analogous bill about ‘the Kherson oblast’ was introduced on 20 January 2023.  At least the second of these has been drawn up by the same individuals (Russian senator Andrei Klishas and Duma deputies Pavel Krashennikov and Iryna Pankina) who propose legislating impunity for crimes committed on Ukrainian territory if in Russian interests.  It should be noted that both bills refer to the respective oblasts, although in neither case is Russia at present in control of even the regional centres (Zaporizhzhia and Kherson).  On the eve of Russia’s full-scale invasion of Ukraine, Putin ‘recognized’ Russia’s proxy Donetsk and Luhansk republics’ as effectively encompassing the large parts of those oblasts which were not under occupation.  Those now hoping to prevent ‘escalation of the conflict’ must be aware that Russia is just as openly admitting to plans to annex four entire regions of Ukraine.

The ‘courts’ which the bills envisage will only function on occupied territory after the Russian Supreme Court has issued the appropriate ruling.  This it will only do once at least half the ‘judges’ required have been appointed.  Judging by Russia’s inability to find sufficient educational workers, doctors, etc., willing to collaborate, it is to be hoped that Ukrainian judges will also refuse to thus breach their oath.  This would appear to be the expectation among the Russians and those Russian-installed collaborators.  Volodymyr Saldo, the puppet head of the occupation Zaporizhzhia administration, tried to present the situation rather differently, claiming that Ukrainian judges simply don’t know Russian legislation, and that they were therefore looking elsewhere for ‘specialists’.  He mentioned Crimea which has been under Russian occupation since 2014.

CJI reports that Putin signed a new bill on 19 December aimed at providing incentives to ‘judges’ from Russia or occupied Crimea willing to work in other occupied parts of Ukraine.  They will receive extra pay and also the chance to make swifter moves up the career ladder.

There are certain ‘judges’ in occupied Crimea, both those Ukrainian nationals who proved willing to betray their oath to Ukraine, and those imported from Russia, who have become notorious for politically motivated rulings against Crimean Tatars and other Ukrainians.  There are also very many in Russia ready to pass the sentences demanded of them.  Russia will doubtless be eager to find just such individuals ready to share ‘their expertise’ in other occupied parts of Ukraine.  CJI’s Mykyta Panasenko notes that another method for ensuring that ‘judges’ provide the sentences demanded of them is to choose those individuals who have corruption or similar sins that they can try to ‘atone’ by providing the services required on occupied territory.  He mentions, for example, scandals linked with the Russian judge Roman Batryshin, who has been appointed ‘head’ of the only fake ‘court’ in occupied Zaporizhzhia oblast thus far registered (in Russia).

Russia is also bringing in its own ‘prosecutors’, with Kirill Osipchuk, taken from his post as deputy prosecutor for Rostov-on-Don to be appointed so-called ‘acting prosecutor of the Zaporizhzhia oblast’. His ‘first deputy’ is to be Dmitry Zagoruyko, brought from North Osetia, and ‘deputy’ Aleksandr Slitsyn from occupied Sevastopol.  The latter was responsible for ‘federal security, international relations and countering extremism and terrorism’.  In that capacity, he simply must have been aware of the huge number of fake prosecutions and subsequent prison sentences against Crimean Tatar civic activists and journalists, Jehovah’s Witnesses and many other Ukrainians.  The Southern District Military Court in Rostov has also gained notoriety for its politically motivated sentences against Crimean Tatar and other Ukrainian political prisoners.  In all such cases, the ‘prosecutors’ and ‘judges’ are directly complicit in allowing convictions and sentences of up to 20 years’ imprisonment based on deeply flawed charges, fake ‘expert assessments’ and so-called secret witnesses.  Russia will, most certainly, bring all of this to any part of Ukraine temporarily under its occupation.

The Russian invaders have abducted a huge number of Ukrainian civilians since its full-scale invasion, with many believed to be held in occupied Crimea or parts of Russia.  Some have already been ‘tried’ by kangaroo courts, others are facing preposterous charges and ‘sentences’.  In some cases, such as the imprisonment of Oleksandr Babych, the Mayor of Hola Prystan (Kherson oblast) or Iryna Horobtsova (from Kherson), charges do not appear to have even been laid, however the Russians have been holding them prisoner for up to10 months.  Russian human rights lawyer Pavel Chikov reported in December 2022 that Russia had effectively acknowledged that Ukrainian hostages were being held “outside Russia’s legal framework’.  He cited the Russian defence ministry’s reply to attempts by a lawyer  trying to establish the whereabouts and charges, if any, against Mykyta Shkriabin, a Ukrainian seized by the Russian invaders on 29 March 2022.   The lawyer, Leonid Solovyov, was informed that Shkryabin had been seized “for countering the special military operation’ [Russia’s euphemism for its war of aggression against Ukraine’ and that information about his whereabouts is ‘on restricted access’.  He was refused access to his client, and applications to get a check carried out into such flagrant violation even of Russian procedure, let alone international law, were also turned down.  Russia is essentially claiming the ‘right’ of a terrorist state to take people hostage and hold them totally incommunicado.

As reported, the same individuals responsible for the above-mentioned bill on Kherson oblast have also come up with another bill which envisages Russian ‘carte blanche’ for just about any atrocities and other war crimes committed on occupied territory.

Draft law № 246425-8 is entitled “on the application of Russia’s criminal code and criminal procedure code on the territory of the Donetsk people’s republic; the Luhansk people’s republic; the Zaporizhzhia oblast and Kherson oblast”.  Like its authors’ other bills, it pays no need to the fact that Russia is not in full control of any of these oblasts.   This bill has passed through a first reading, and looks likely to be adopted, although it demonstrates new and horrific depths of legal banditry.  The bill proposes to waive criminal liability for any crime if this was, purportedly, committed “in defence of the interests of the Russian Federation.”  Further details here: Russia moves to legislate ‘impunity’ for all war crimes committed in occupied Ukraine