Russia forces Mariupol children to knit socks for soldiers in Ukraine to kill UkrainiansRussia plans special propaganda ‘lesson’ explaining to children in occupied Ukraine why the bombing of their cities is ‘liberation’Russia teaches Mariupol children to shoot and to hate Ukraine Invaders threaten to take children away if parents don’t send them to be indoctrinated ‘to love Russia’ Teachers in occupied Kherson refuse to collaborate with Russian occupiers Russia uses terror and abduction in attempt to force schools to collaborate in occupied Melitopol Mayor of Melitopol Ivan Fedorov abducted after refusing to collaborate with the Russian invaders Russian priest arrested and prosecuted for sermon opposing Russia’s war against Ukraine Russia effectively admits it deliberately bombed the maternity hospital in Mariupol that killed three patients, including a childRussia brings grotesque propaganda to Berdiansk after Ukrainian journalists refuse to collaborate Russian invaders murder Ukrainian volunteers Impassioned appeal from Ukrainian Muslim leader in face of Russia’s war to destroy Ukraine Russia is forcing Ukrainians from occupied Crimea and Donbas to fight in its invasion of Ukraine Children among the dead after Russian invaders opened fire on fleeing civilians Russia installs its propaganda TV after seizing Kherson and imposes 15-year sentences for reporting its invasion of UkraineUkrainian survivors of the Holocaust demand Putin and Russia get out of Ukraine Russia continues its carnage, flouting binding order from ECHR to stop bombing civilians in UkraineBabyn Yar bombed by Russia, 80 years after Nazi Massacre of Ukrainian Jews Russia proposes 15-year sentences and threatens "treason charges" for telling the truth about its war crimes in UkraineRussian schoolchildren told that Russia is bombing and killing Ukrainian children in ‘self-defence’
• Topics / War crimes 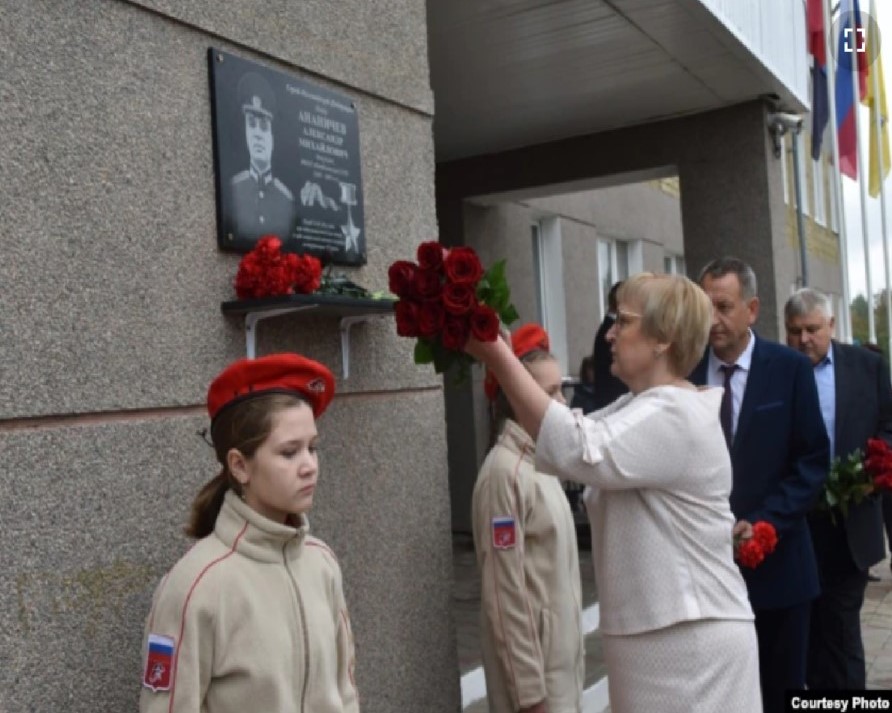 Russian schools, sports clubs and even streets are increasingly being named after soldiers who were killed while part of the army invading and ravaging Ukraine.  Andrei Turchak, a leading figure in the ruling ‘United Russia’ party has claimed that these men who were sent to kill Ukrainians “gave their lives for the unity of the Russian people”.

Such glorification of killers is not new, with Russia’s ‘heroes’ having long included Arsen Pavlov [‘Motorola’], a Russian mercenary whom Ukraine had every reason to want tried for war crimes in Donbas.  The scale and haste with which Russia is treating any members of its invading forces killed as ‘heroes’ are, however, unprecedented and, according to a Russian historian, demonstrate the regime’s attempts to justify their war of aggression against Ukraine.

On 16 December, ‘Current Time’ reported the results of their probe into efforts in the Russian Federation to ‘honour’ soldiers killed since Russia began its full-scale invasion of Ukraine on 24 February 2022.  Moscow is, of course, not only avoiding  correct terms like ‘invasion’, but even the word ‘war’, so the streets, etc., are renamed after supposed ‘heroes of the SMO’ [‘special military operation’].  The probe found dozens of places where streets, schools, etc. had been renamed or where memorial plaques were hung in memory of soldiers who had been killed.

In the village of Sovyetskoye [Belgorod oblast], a memorial plaque was erected over the school which junior sergeant Vadim Rozhkov had attended. He was also, reportedly, honoured, by presidential decree, with an award ‘for bravery’.  Nor was this all, with the local history museum also holding, as exhibits, Rozhkov’s left and right socks,  boots and camouflage trousers.  According to Poligon Media, the same museum also exhibits the clothes of another soldier and two fighters, described as ‘volunteers’, with similar exhibits reported in other such museums as well.  Rozhkov was killed in June, while another of the men whose clothes are treated as museum exhibits, died in September.  The same museum exhibiting Rozhkov’s socks, has wooden badges and a chevron with the letters ‘Z’ and ‘V’ (both of which have become symbols of Russia’s war against Ukraine) and a souvenir coin for the so-called ‘special military operation’, with an image of Russian leader Vladimir Putin.

In some of the cases where streets have been renamed, there has been local protest, but only because people wanted to retain the old name.

Current Time reports that, judging by information on open sources, hundreds of soldiers have received awards ‘for bravery’.  That number would seem to include some of those recruited by Yevgeny Prigozhin, the internationally sanctioned millionaire known as ‘Putin’s chef’, for his notorious ‘Wagner private military company’.  Prigozhin has recruited a huge number of convicted prisoners, many of whom were serving decades for multiple killings and other crimes.  They included, for example, Ivan Neparatov, leader of a Russian criminal gang, who had been serving 25 years for five murders among many other crimes when he was offered his freedom and money in exchange for fighting Russia’s war against Ukraine.  His award ‘for bravery’ was also posthumous.

Back in April 2022, Putin ‘honoured’ the 64th motorized infantry brigade which is believed to have been behind many of the atrocities committed by the Russian invaders in Kyiv oblast (extrajudicial killings, with many of the victims first tortured; rape and killing, etc). Putin’s decree talks of ‘mass heroism and daring, tenacity and courage”.

Moscow has also declared a record-breaking number of soldiers ‘heroes of Russia’, with over half of these awarded posthumously.  It should be said that the term ‘hero of Russia’ was already of dubious value given that Putin’s protégé, the brutal Chechen leader Ramzan Kadyrov; defence minister Sergei Shoigu and Yevgeny Prigozhin have all been awarded such status.  If, however, before Russia’s full-scale invasion, only around ten people were designated ‘heroes of Russia’ each year,  this changed dramatically in 2022.  As of the beginning of December, at least 122 military people had been honoured as ‘heroes of Russia’, 63 of them posthumously.

In all of the above cases, the men are treated as having ‘died heroically’ or even designated as ‘heroes of Russia’ by virtue of the fact that they took part in Russia’s war of aggression and were killed.

As mentioned, only the scale is new.  Russia has already erected monuments to Arsen Pavlov, or ‘Motorola’, ignoring not only the crimes this Russian warlord is believed to have committed in Donbas, but also the fact that he was in Ukraine as a mercenary.  The Current Time report mentions that a Russian ‘Yunarmia’ unit has been named after Vladimir [Ukrainian Volodymyr] Zhoha, the successor to ‘Motorola’ as commander of the ‘Sparta’ illegal armed formation in Donbas. He was killed in March this year, and then declared ‘hero of Russia’ by Putin.

Sometimes, even the Russian proxy ‘Donetsk and Luhansk people’s republics’ effectively acknowledge that those militants glorified were categorically not deserving of this.  In 2020, a Luhansk ‘military court’ admitted that Alexei Mozgovoy (Ukrainian Oleksiy Mozhovy), the militant commander of the ‘Prizrak’ [‘Ghost’] illegal armed formation during the first year of the war in Donbas, had been a criminal who had a family killed in cold blood in order to steal their money and possessions.  It is most unlikely, however, that the information led to any monument in his name being removed.

All of this is especially worrying given Russia’s intensive indoctrination of children and young people at home and on occupied Ukrainian territory.  Children are told that soldiers who, at best, were merely obeying essentially criminal orders by taking part in Russia’s invasion, are ‘heroes’ and role models.  Russia’s Yunarmia, or ‘youth army’ is also involved in guards of honour, etc.

The intensive measures aimed at glorifying soldiers involved in the invasion appear to have been initiated by the ruling United Russia party and by the Russian Military History Society. The latter was created by Putin in December 2012, in order to “consolidate the forces of state and society in the study of Russia’s military-historical past and counter efforts to distort it”.  Such methods at ‘countering distortion’ have thus far involved establishing museums and monuments to the bloody Soviet dictator and mass murderer, Joseph Stalin; trying to question who lies buried at the mass graves of victims of the Soviet Terror at Sandarmokh (Karelia) and others.

Current Time spoke with Russian historian Maksym Kuzakhmyetov.  He points out that all of this glorification during a war is quite new, and was not seen, for example, during the Second World War.  It was, in fact, envisaged that people would only be designated as ‘heroes of Russia’ ten, or even twenty, years after the events which were supposed to warrant the honour.  So that it was clear, he says, that it is deserved.

Now, instead, it may be a matter of months, or even weeks, between a person’s death and their award.  The fact that there are as many posthumous ‘Hero of Russia’ awards as those honouring the living is also a break from past treatment of such awards.  He comments, that it is now “safer” to give the awards to those who will not later tell the inconvenient truth to senior schoolchildren about the hell they endured, etc.  The Russian authorities, he suggests, are using the image of ‘dead heroes’ as a way of trying to justify Russia’s invasion of Ukraine.  “What this regime is trying to convince people of is that this is a just war, that they are forced to wage. Therefore the presence of heroes legitimizes the situation. They all prepare lads for death, so that they pointlessly died with Putin’s name on their lips.  You were ordered, so you go, and that’s it. And for some reason, if you were killed, that means a feat, although it is all quite different.”