Ukrainian survivors of the Holocaust demand Putin and Russia get out of Ukraine Russia continues its carnage, flouting binding order from ECHR to stop bombing civilians in UkraineBabyn Yar bombed by Russia, 80 years after Nazi Massacre of Ukrainian Jews Russia proposes 15-year sentences and threatens "treason charges" for telling the truth about its war crimes in UkraineRussian schoolchildren told that Russia is bombing and killing Ukrainian children in ‘self-defence’ Putin miscalculated. Russia is fighting “an army of 40 million Ukrainians” Chief Rabbi of Ukraine demolishes Putin’s excuse for Russia’s invasion Russia bombs a Ukrainian kindergarten and apartments in its war against independent Ukraine Putin will continue attacking until Russia is stopped. Help Ukraine defend its freedom today!Russian Rule of Lawlessness in Occupied Crimea and DonbasCrimean teacher dismissed and threatened with prosecution for telling students the truth about Russia’s war against UkraineChildren among the dead after Russian invaders opened fire on fleeing civilians Russia is forcing Ukrainians from occupied Crimea and Donbas to fight in its invasion of Ukraine Russian soldiers risk prison or injure themselves so as to not fight in Ukraine Impassioned appeal from Ukrainian Muslim leader in face of Russia’s war to destroy Ukraine Russian invaders murder Ukrainian volunteers Russia brings grotesque propaganda to Berdiansk after Ukrainian journalists refuse to collaborate Russia effectively admits it deliberately bombed the maternity hospital in Mariupol that killed three patients, including a childRussian priest arrested and prosecuted for sermon opposing Russia’s war against Ukraine Mayor of Melitopol Ivan Fedorov abducted after refusing to collaborate with the Russian invaders
• Topics / Terrorism
• Topics / Freedom of expression
• Topics / War crimes 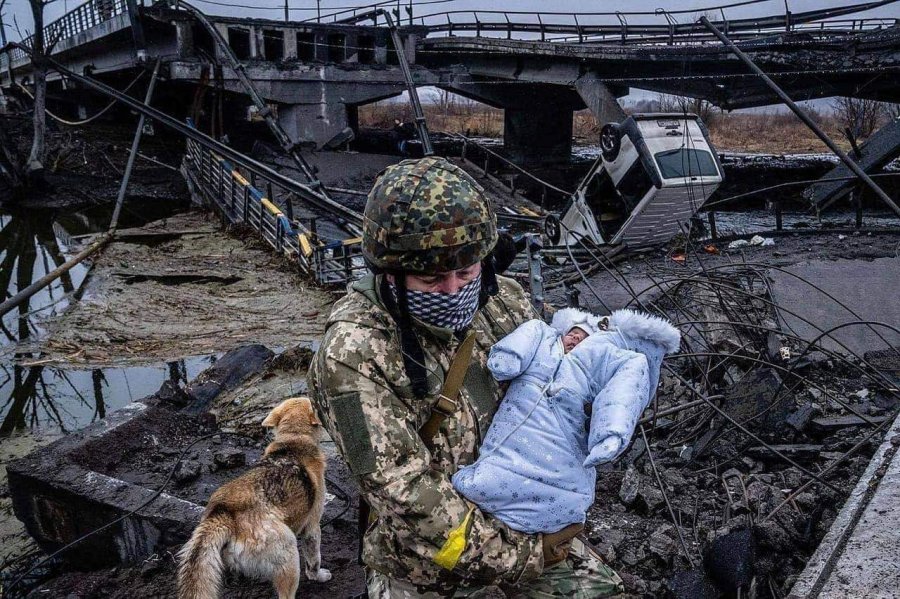 Russia has effectively silenced all sources of objective information about its war against Ukraine at home, and is swiftly moving to seize control of the media where it has seized Ukrainian cities.  This was exactly the procedure that the Russian invaders used back in 2014 in Donbas and Crimea, and it is difficult to understand why western media, who are now blocked in Russia, are still allowing Moscow to repeat its lies on their platforms.

It was learned early on 4 March that the Russians had taken control of the television towers in both Kherson and Melitopol, had installed their own equipment and had begun broadcasting Russian state propaganda channels.

Ukraine’s Security Service [SBU] also reported that people are being brought in to Kherson from occupied Crimea with the aim of pretending to be Kherson residents and staging a ‘rally’ with Russian flags, welcoming the invader.  The SBU believe that 60-80 Crimeans have already arrived and are staying in a local hotel.  They also have information that the invaders have seized a store of water police uniforms and are planning to have Russians dress in these uniforms and also be seen ‘greeting’ the Russians.

For those in government-controlled Ukraine or other countries, who have been watching Russia bomb civilian targets and Ukrainians valiantly trying to defend their country, this may seem absurd.  Today, tomorrow, it is, but Russia has succeeded in cutting off almost any truthful sources of information in occupied Crimea and Donbas, and, if the West lets Ukraine fall, it will also be Russia that writes the history books.  As far as Russians are concerned, although some are protesting, it is clear that a lot do not yet understand that they are being brainwashed.

Ukraine’s Institute for Mass Information also reported on 4 March that a notorious Kherson Russian collaborator, Kyrylo Stremousov, has been threatening independent journalists and ‘dissidents’ with Russian imprisonment.  Local journalists have told IMI that he is warning all those journalists, activists and patriots who are against the so-called ‘Russian world’ doctrine that they will face purges and prison.  In his video, Stremousov referred to a draconian new law that Russia’s State Duma passed on 4 March and which Russian leader Vladimir Putin has already signed into force.  This envisages sentences of up to fifteen years for what is claimed to be ‘fakes’ and ‘discreditation’ of the Russian army.  It is quite clear that such ‘fakes’ are, in fact, the truth about what Moscow is claiming is a ‘special military operation’ aimed at something the Kremlin calls ‘the demilitarization and denazification of Ukraine’. Against absolutely all evidence, seen by the entire world, Russia is denying that it is systematically bombing civilian targets, and that it is carrying out an invasion. It has now introduced hefty prison sentences to deter people from telling the truth.

Within hours, the BBC had announced that it was temporarily suspending any journalist work in Russia due to this new law. 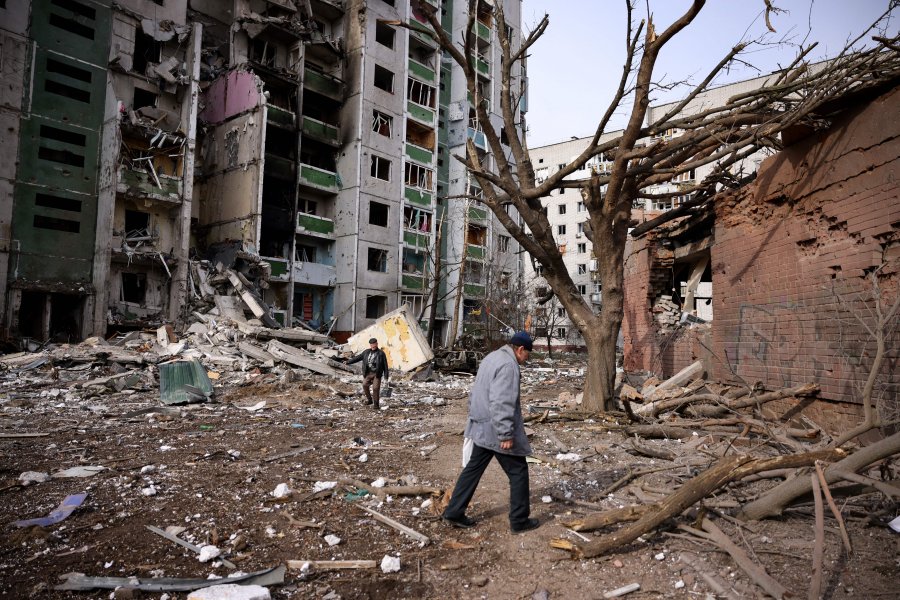 As reported, many media, including Ekho Moskvy and TV Dozhd, were blocked early in the week.  During the night from Thursday to Friday, Russia’s censor, Roskomnadzo blocked most foreign media with a Russian-language website (BBC Russian; Deutsche Welle; Voice of America; Radio Svoboda; Meduza, as well as a large number of Ukrainian media.  Roskomnadzo claimed that these media were circulating “false information” about the so-called ‘special military operation’ in Ukraine.  Worth noting that the BBC Russian Service had reported a huge increase in the number of visitors to its site, with Russians having clearly understood that they were not being told the truth on state media.

Another blow for those trying to obtain or circulate truthful information is that Facebook and Twitter have been totally blocked (in Russia and occupied Crimea).  Facebook earlier stated that they would not comply with Russia’s demand that they stop labelling and fact-checking state-affiliated media.

The independent newspaper Novaya Gazeta had earlier reported a vote among its readers which found that an overwhelming majority wanted the paper to continue reporting, even if this meant agreeing to the censorship (not using words like invasion, etc.).  After the law was passed, Novaya stated that, in view of the earlier vote, they would be removing all material about the war.

Even for Russia’s puppet parliament, the bill was passed into force with dizzying speed.  Criminal lability is imposed for what is referred to as the “public circulation of knowingly false information about the RF armed forces” and “public acts aimed at discrediting the use of the RF armed forces for the purpose of defending the interests of the RF and its citizens, support of international peace and security”.   This carries a punishment of three years’ imprisonment, unless it is committed by a group, for profit, or “for motives of political, ideological, racial, national or religious hatred”.  Conviction on the latter charges could get you imprisoned for ten years, or fifteen, if it was claimed that it caused “grave consequences”.

Russia’s upper house of parliament also approved a law which envisages imprisonment for up to three years for calling for sanctions to be imposed on Russia.

The bill also establishes administrative liability for what are called “public actions aimed at discrediting the use of the Russian armed forces for the purpose of defending Russia and its citizens, including calls to obstruct the use of the Russian forces for these purposes. Essentially, Russians and people in occupied Crimea could now face a substantial fine for calling on people to protest against the war, and will face criminal liability is this supposed ‘offence’ is repeated in the space of a year.

There have also been very clear threats from the Prosecutor General’s Office that people could find themselves prosecuted for so-called ‘treason’, with the latter including “providing financial; material and technical; consultative or other help to a foreign state; international or foreign organization, or their representatives in activities aimed against the security of the Russian Federation” (details here).