Children among the dead after Russian invaders opened fire on fleeing civilians Russia installs its propaganda TV after seizing Kherson and imposes 15-year sentences for reporting its invasion of UkraineUkrainian survivors of the Holocaust demand Putin and Russia get out of Ukraine Russia continues its carnage, flouting binding order from ECHR to stop bombing civilians in UkraineBabyn Yar bombed by Russia, 80 years after Nazi Massacre of Ukrainian Jews Russia proposes 15-year sentences and threatens "treason charges" for telling the truth about its war crimes in UkraineRussian schoolchildren told that Russia is bombing and killing Ukrainian children in ‘self-defence’ Putin miscalculated. Russia is fighting “an army of 40 million Ukrainians” Chief Rabbi of Ukraine demolishes Putin’s excuse for Russia’s invasion Russia bombs a Ukrainian kindergarten and apartments in its war against independent Ukraine Putin will continue attacking until Russia is stopped. Help Ukraine defend its freedom today!Russian Rule of Lawlessness in Occupied Crimea and DonbasRussian soldiers risk prison or injure themselves so as to not fight in Ukraine Impassioned appeal from Ukrainian Muslim leader in face of Russia’s war to destroy Ukraine Russian invaders murder Ukrainian volunteers Russia brings grotesque propaganda to Berdiansk after Ukrainian journalists refuse to collaborate Russia effectively admits it deliberately bombed the maternity hospital in Mariupol that killed three patients, including a childRussian priest arrested and prosecuted for sermon opposing Russia’s war against Ukraine Mayor of Melitopol Ivan Fedorov abducted after refusing to collaborate with the Russian invaders Russia uses terror and abduction in attempt to force schools to collaborate in occupied Melitopol
• Topics / Terrorism
• Topics / Army 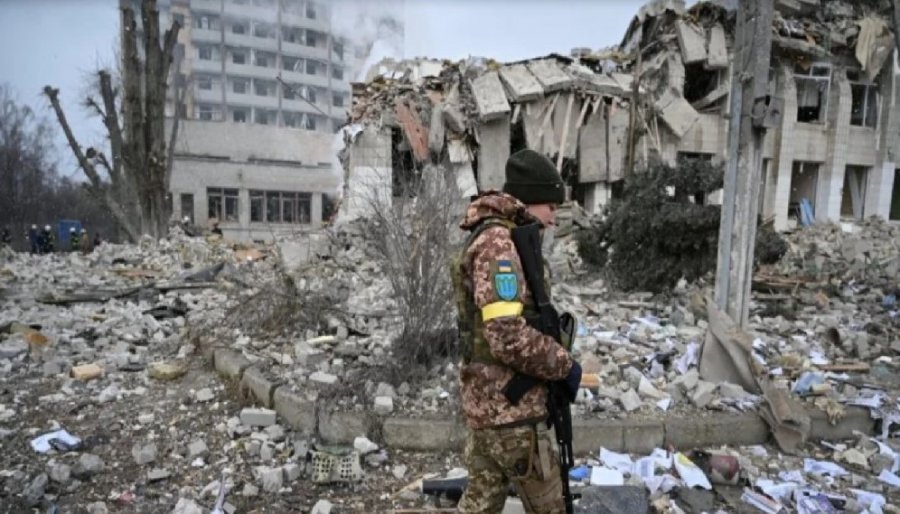 Ukrainian soldier outside a Zhytomyr school destroyed by Russian enemy shelling (one of the crimes that Russia is forcibly mobilizing Ukrainians from occupied territory to commit). Photo Viacheslav Ratynsky, Reuters.

Russia is illegally mobilizing Ukrainian men from occupied Crimea and Donbas to take part in its invasion of Ukraine and kill fellow Ukrainians. Human rights groups and the President’s Representative Office on Crimea are circulating in Ukrainian; Russian and Crimean Tatar a clear guide explaining to young Ukrainian citizens how to try to avoid being forcibly mobilized and what to do if this proves impossible.

Ukraine began sounding the alarm over forced conscription in occupied Crimea soon after Russia’s invasion and annexation, and there has been international condemnation of Russia’s open violation of international law.  Article 51 of the Fourth Geneva Convention states unambiguously that “the Occupying Power may not compel protected persons to serve in its armed or auxiliary forces. No pressure or propaganda which aims at securing voluntary enlistment is permitted”.

Russia has been conscripting Crimean lads for almost eight years, and a considerable number have faced illegal criminal prosecution for refusing to do military service.  It has also waged active propaganda of its armed forces on occupied territory, with systematic militarization of childhood from preschool years.

Now the absolute worst has happened, with Russia, as invader, forcing young men on territory already occupied, to join its forces trying to seize more Ukrainian land.  From a preliminary list of prisoners of war captured by Ukraine while fighting in Russia’s army of war, the Crimean Human Rights Group reported on 5 March that it had identified ten young Crimean conscripts and one Crimean contract soldier.

The number of Crimeans is likely to be much higher, and we know that, since 18 February, the Russian proxy ‘Donetsk and Luhansk people’s republics’ have been seizing and forcibly ‘mobilizing’ men between 18 and 55.  Of a supposed ‘Russian’ unit who surrendered to the Ukrainian Army, most had been forcibly seized from schools and technical colleges where they were working. Several were addressed, and answered in Ukrainian.

The advice page to young men at risk of conscription points out that all residents of occupied Crimea and Donbas are Ukrainian citizens.  This is regardless of whether they have been forced into receiving Russian citizenship.

“If you are forcibly mobilized into the Russian Federation armed forces or illegal armed bodies, linked with them, you will be viewed by Ukraine as a victim of Russia’s war crime.”   Readers are assured that those responsible for such crimes will face liability according to Ukrainian legislation and / or at the International Criminal Court.

So what should those facing mobilization do?

The first advice is to sabotage such ‘service’ in the armed forces of the aggressor state.  Avoid personally receiving the call-up notice or phone calls from the occupation military recruitment offices (including by changing phone number, address, etc.)

If this does not work, and you are forcibly mobilized, “As soon as you get onto territory under Ukrainian control or at your first meeting with Ukraine’s Armed Forces, surrender and inform them that you are a Ukrainian citizen from occupied Crimea, Donetsk or Luhansk oblasts (even if you don’t have documents confirming this, we will establish this).  Then you will remain only a victim of a war crime in Ukraine, and you will, with time, be able to safely return home alive.”

Do not obey illegal orders that could lead to civilian casualties or destruction of civilian infrastructure  If you do so, your actions will be classified as crimes that have no time bar and you will eventually be held accountable, according to Ukrainian and international law.  The advice ends with an unequivocal warning that those voluntarily enlisting in Russia’s armed forces and taking part in the aggressor’s war against Ukraine will face up to 15 years’ imprisonment in accordance with Ukrainian legislation.  If a person held a commanding post, they could be tried by the International Criminal Court.

Russia is certainly using occupied Crimea as a military platform for its war against Ukraine, with military formations brought by railway via Russia’s illegal Crimea bridge from Russia.  The President’s Representative Office reports that witnesses have seen such formations, made up of 23 carriages with servicemen for three days running.  It reports also that at the very beginning of its war, Russia installed launch pads on the roofs of private homes in northern Crimea.

According to the Representative Office’s information, the hospitals in norther Crimea (Armyansk; Krasnonerekopsk and Dzhankoy) hospitals are full of wounded Russian (or forcibly mobilized Ukrainian) soldiers, with each having around 1,000 to 1,500 men.