Courageous Ukrainian journalist Victoria Roshchyna feared seized by Russian invaders Five members of a family and people queuing for bread killed by Russian bombing of Chernihiv Russia responds to International Court order to stop bombing Ukraine by destroying Mariupol Theatre sheltering familiesRussian invaders take Mariupol intensive care hospital and its patients hostage Mass graves of the Ukrainian civilians Russia claims it is not killingTerror and abductions as Russia tries to break Ukrainian resistance in Kherson and other occupied citiesUkrainian journalist Oleh Baturin feared abducted by Russian invaders in Kherson oblast Mayor of Melitopol Ivan Fedorov abducted after refusing to collaborate with the Russian invaders Russian priest arrested and prosecuted for sermon opposing Russia’s war against Ukraine Russia effectively admits it deliberately bombed the maternity hospital in Mariupol that killed three patients, including a childRussia brings grotesque propaganda to Berdiansk after Ukrainian journalists refuse to collaborate Russian invaders murder Ukrainian volunteers Impassioned appeal from Ukrainian Muslim leader in face of Russia’s war to destroy Ukraine Russia is forcing Ukrainians from occupied Crimea and Donbas to fight in its invasion of Ukraine Children among the dead after Russian invaders opened fire on fleeing civilians Russia installs its propaganda TV after seizing Kherson and imposes 15-year sentences for reporting its invasion of UkraineUkrainian survivors of the Holocaust demand Putin and Russia get out of Ukraine Russia continues its carnage, flouting binding order from ECHR to stop bombing civilians in UkraineBabyn Yar bombed by Russia, 80 years after Nazi Massacre of Ukrainian Jews Russia proposes 15-year sentences and threatens "treason charges" for telling the truth about its war crimes in Ukraine
• Topics / War crimes

Ukrainians block 'deliveries of death' from Poland to Belarus and Russia, demanding the EU stops trading with killers 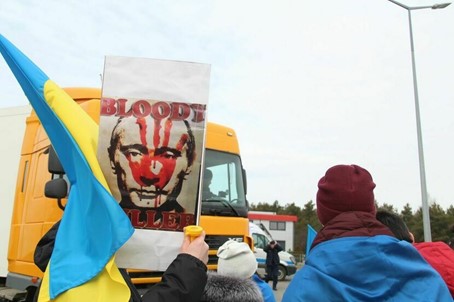 It is over three weeks since Russia invaded Ukraine, with the Belarusian regime a direct accomplice to the atrocities that Moscow is committing, yet EU goods are continuing to flow into the aggressor states.  It is these “deliveries of death” that several hundred protesters are now seeking to block on the border between Poland and Belarus.  This was the second such blockade, and according to Natalia Panchenko, a Ukrainian activist from Warsaw, on 19 March it succeeded in preventing any trucks crossing the border.  It is, however, vital that measures are taken at the EU level to make sure that all such trade is stopped.

Panchenko explained to the newspaper Dziennik Wschodni that each euro that reaches Russia is sponsoring the war against Ukraine.  “While the economy develops, [Russian leader Vladimir] Putin has the money for this invasion”.  She and fellow protester, Zhenia Klimakin, have called on Ukrainians in other EU countries to help such blockades.  It is principally from France, Germany and Italy that such supplies are being sent into Belarus and, from there, into Russia.

“We want the EU to block any possibility of trade with Russia”, Klimakin told Dziennik Wschodni. “We asked truckdrivers and some are transporting Martini or salami.  Sorry, but bombs are falling on Ukrainian cities, there is no electricity or water and the EU is supplying Martini to Russia? For God’s sake!”

Nor is this only an issue of Martini and salami.  During the first blockade that began on 12 March, the protesters stressed that Belarusian and Russian trucks were carrying not only food items, but also “equipment for the aggressor state”.  The sanctions that have now been imposed need to include goods delivered by road transport. 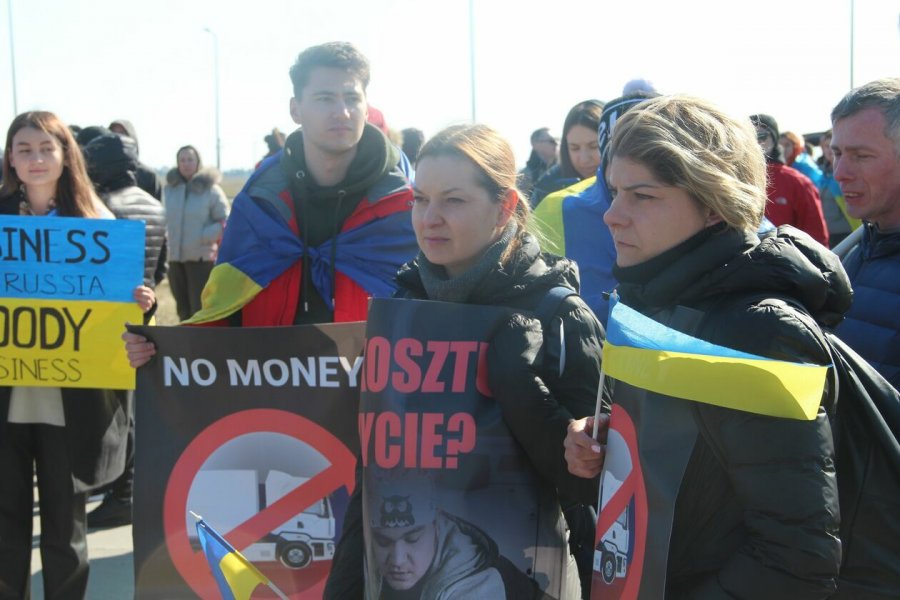 Blockade No money, no war. One of the placards asks the value of a human life. Photo Ewelina Burda, Dziennik Wschodni.jpg

Polish customs officials insist that they check all loads passing through the Polish – Belarusian border and that only those goods that are not under sanctions get through.  It is, however, hard to believe that all trucks are fully checked, and such deliveries might also serve as a convenient way for Russians to get foreign currency in or out of Russia.  It is precisely to cut off the sources used by Russia to finance its aggression that various other sanctions have been imposed, and it is surely obvious that road transport should be stopped.

The first blockade continued from 12 to 14 March, but the protesters were finally driven away by Polish police. At that stage, support for the blockade was expressed by various opposition politicians (Joanna Mucha from the Poland 2050 movement and Tomasz Grodzki, Speaker of the Senate from Platforma Obywatelska),.  Piotr Müller, spokesperson for the government, however, said that there was no agreement at the EU level to restrict road transport to Russia, and that they were looking for other solutions and legal ways of restricting the transport.

No such measures appear to have been found, and on 19 March, a considerably larger number of protesters, most of them Ukrainians based in Poland,  came out to prevent truck drivers from crossing the borders.  By late evening, there was a 20-kilometre queue of “thousands of trucks”.  The protesters stood with banners and placards demanding an end to trade with Putin, the “bloody killer” and saying “No trade with Russia = no war.”  One placard showed photos of the devastation of Kharkiv from Russia’s savage bombing, with the words: “I am Kharkiv. Stop trading with the aggressor.”

On 19 March, Dariusz Szymchycha, Deputy Head of the Polish-Ukrainian Economic Chamber, supported the blockade.  He called the supplying of goods to the regimes of Putin and Aleksandr Lukashenka “immoral” and said that he had earlier told transport firms that “deliveries to Russia and Belarus are essentially deliveries of death”.  He added, however, that the Polish government should put pressure on the entire EU and specific countries to make such deliveries impossible.

In fact, on 19 March Polish Prime Minister Mateusz Morawiecki did state that Poland will be calling for the EU to totally cut off trade with both countries.

If you are living in an EU country, please contact your elected representatives and consider other methods of ensuring that it is not business as usual for countries that are bombing Ukrainian cities and causing endless carnage and suffering.