Five members of a family and people queuing for bread killed by Russian bombing of Chernihiv Russia responds to International Court order to stop bombing Ukraine by destroying Mariupol Theatre sheltering familiesRussian invaders take Mariupol intensive care hospital and its patients hostage Mass graves of the Ukrainian civilians Russia claims it is not killingTerror and abductions as Russia tries to break Ukrainian resistance in Kherson and other occupied citiesUkrainian journalist Oleh Baturin feared abducted by Russian invaders in Kherson oblast Mayor of Melitopol Ivan Fedorov abducted after refusing to collaborate with the Russian invaders Russian priest arrested and prosecuted for sermon opposing Russia’s war against Ukraine Russia effectively admits it deliberately bombed the maternity hospital in Mariupol that killed three patients, including a childRussia brings grotesque propaganda to Berdiansk after Ukrainian journalists refuse to collaborate Russian invaders murder Ukrainian volunteers Impassioned appeal from Ukrainian Muslim leader in face of Russia’s war to destroy Ukraine Russia is forcing Ukrainians from occupied Crimea and Donbas to fight in its invasion of Ukraine Children among the dead after Russian invaders opened fire on fleeing civilians Russia installs its propaganda TV after seizing Kherson and imposes 15-year sentences for reporting its invasion of UkraineUkrainian survivors of the Holocaust demand Putin and Russia get out of Ukraine Russia continues its carnage, flouting binding order from ECHR to stop bombing civilians in UkraineBabyn Yar bombed by Russia, 80 years after Nazi Massacre of Ukrainian Jews Russia proposes 15-year sentences and threatens "treason charges" for telling the truth about its war crimes in UkraineRussian schoolchildren told that Russia is bombing and killing Ukrainian children in ‘self-defence’
• Topics / War crimes 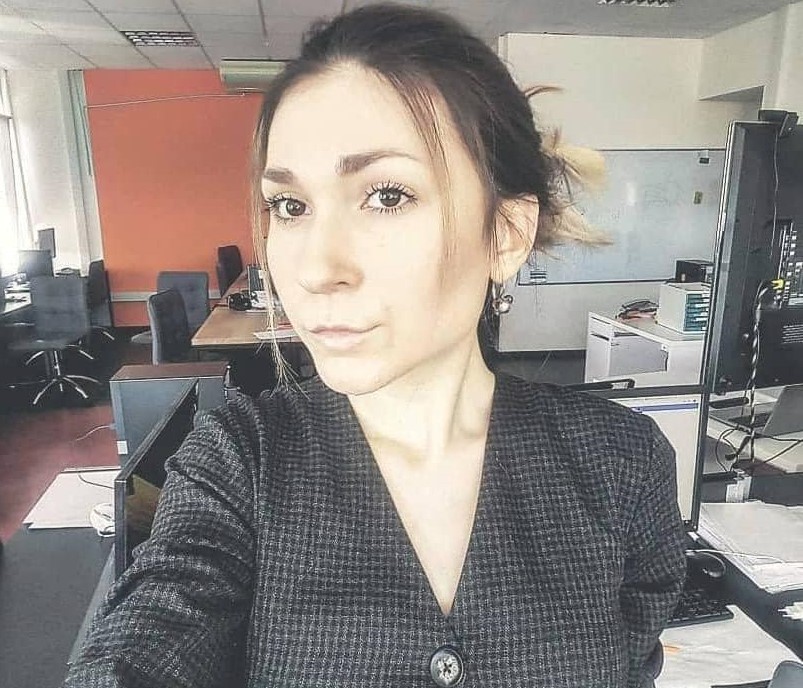 Hromadske.ua journalist Victoria Roshchyna has not been seen since 12 March, and it is feared that she has been seized by the Russians who have invaded and seized control of Berdiansk in the Zaporizhya oblast.

Hromadske reports that Victoria had, since the beginning of Russia’s invasion on 24 February, been filming video material and writing reports from hot spots in the east of south.  On 11 March, her report was published about life in Enerhodar, the city next to the Zaporizhya Nuclear Power Plant where residents tried desperately to stop Russia seizing the plant.  She was planning material on the military action in the Zaporizhya and Donetsk oblasts, and had hoped to enter Mariupol, the port city which Russia has been unable to seize and is instead mercilessly bombing.  She had hoped to provide information about what is happening in the city, where up to 300 thousand residents are effectively being held hostage, since Russian bombing and shelling is making any major evacuation of civilians impossible.

Roshchyna’s colleagues believe that she was probably on her way from Zaporizhya to Mariupol in the evening of 11 March.  The telephone connection was extremely poor, so they virtually did not speak with her then, and since 12 March there has been no contact at all.  It is known with certainty that she had left Enerhodar on 11 March, and witnesses have informed them that on 12 March the journalist was in Berdiansk, which is presently under Russian occupation.

They later learned that, after this, and probably on 15 March, Roshchyna was detained by the FSB (Russia’s ‘security service’).  Hromadske has spent two days trying quietly to secure their colleague’s release, but to no avail, and they are now hoping that publicity, including from the international community, can help free the journalist whose whereabouts remain unknown.

On 8 March, Victoria wrote about how she and one or more colleagues had come upon and been shot and shelled at by a Russian column of tanks.  Her Facebook post began with the words “I will never forgive Russia” and gives the harrowing story of how they survived what was a clear attack on journalists travelling in a car which was marked with the word ‘PRESS’.  They were rescued by locals who helped them hide, but the Russians ransacked their PRESS-labelled car, stealing Roshchyna’s laptop, video camera, rucksack and the driver’s cigarettes.

“There was a lot more, and will definitely be more.

I went to the regions to describe what is happening there and what the people are thinking who are all the time without communications, under the fire of machine guns, grad missiles and the roar of Russian tanks.

In small villages and cities, the occupiers feel like ‘heroes’ – they shoot at civilians living there, they set fire to their cars, kill and loot.  They are turning the life of people into hell, traumatizing children. They took my technology, but they will not take away my wish to tell the truth about their crimes.

This time, it will probably be a miracle that saves me.

But I will never forgive Russia.

They will burn in hell and will definitely go on trial.”

It is very likely that the FSB have deliberately targeted Victoria Roshchyna, and publicity is urgently needed to protect her.