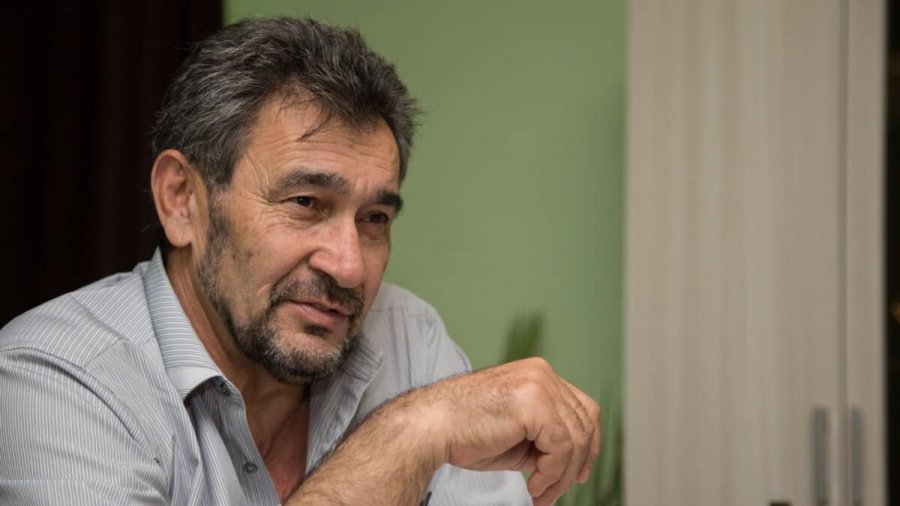 Zair Smedlyaev, the Head of the Central Election Commission of the Qurultay, or National Congress, of the Crimean Tatar people, has become the third prominent Crimean Tatar public figure to be jailed on surreal charges. One of the charges he faced was over a Facebook post that did, indeed, discredit the Russian Armed Forces, as asserted, but only by telling the truth.

As always, repressive measures in occupied Crimea began with an armed search early in the morning of 24 March. Smedlyaev and his wife were alone in the house, and the enforcement officers prevented relatives and Smedlyaev’s lawyers from being present. All laptops, telephones, hard drives, etc. were removed and Smedlyaev himself was taken to the police station. Lawyers were only allowed to see him at around 11 a.m.

Smedlyaev was charged with two articles of Russia’s Code of administrative offences, and, of course, found ‘guilty’ although both charges were simply grotesque.

He was accused of ‘public actions aimed at discrediting the use of the Russian Federation Armed Forces for the purpose of defending the interests of the Russian Federation and its citizens’ (Article 20.3.3 § 1). This is a new article of the Code introduced in blitzkrieg fashion after Russia began its invasion of Ukraine. It is clearly aimed at deterring or punishing those who tell the truth about this invasion, and is especially dangerous as it is only the first so-called ‘offence’ that incurs administrative liability. If Smedlyaev were to be convicted for a second time in the space of a year, he would face criminal prosecution and, potentially, a sentence up to 15 years.

Lawyer Emine Avamileva explained to Crimean Solidarity that the formal grounds for the charge derived from a Facebook post on 9 March 2022.

This was presumably the post where Smedlyaev asks: “How many more innocent civilians, women and new-born babies, must die for the world to begin distinguishing between genocide and God knows what special operations?”

Russia is continuing to call its invasion of Ukraine a ‘special military invasion’ and to deny that its forces are targeting and murdering civilians. It is, at the same time, applying draconian legislation and closing honest media in order to intimidate the population and deter them from telling the truth. The truth in many cases points to clear war crimes, including Russia’s bombing on 9 March of a children’s and maternity hospitals in Mariupol. This killed four immediately, including one child. A heavily pregnant woman was badly injured and died a few days later, with the severity of her injuries making it impossible to save either her, or her baby.

The ’hearing’ was before the Russian-controlled Krasnogvardeisk District Court, with the ‘judge’ with regard to at least one charge – Krystyna Pykula.

The above words about the war were claimed to have fallen under the Article on actions discrediting the Russian Federation and Smedlyaev was fined 40 thousand UAH.

This was not the first Crimean conviction under the new and deeply flawed legislation. On 9 March, a woman from Simferopol placed flowers at the monument to the great Ukrainian poet Taras Shevchenko, as well as a cardboard sign in blue and yellow, with the words ‘No to war’ written with a marker pen. She was fined 35 thousand roubles by ‘judge’ Viktor Mozhelyansky who has long been notorious for his part in politically motivated rulings.

Smedlyaev was also charged under Article 20.3 § 1 of the same Code for a Facebook post from1 March 2014 which purportedly constituted public demonstration of Nazi symbols or of symbols of so-called extremist organizations. Although 1 March 2014 was after Russia invaded Crimea, it was before the pseudo referendum which Moscow used to try to justify its annexation. All of this was ignored by the ‘court’, as was the fact that the post was more than eight years old. ‘Judge’ Pylupa found Smedlyaev ‘guilty’ and ordered that he serve a 48-hour term of imprisonment.

As mentioned, Russia is accompanying its invasion of mainland Ukraine with attacks on prominent Crimean Tatars in occupied Crimea. Just days before the invasion began, Edem Dudakov, a delegate to the Qurultay, was jailed for 15 days, officially over a comment on a Facebook post from 2017. The armed search and his arrest came just days after he reported the latest serious damage that Russia has caused the Khan’s Palace, or Hansaray, in Bakhchysarai. Then on 16 March, Abdureshit Dzhepparov, renowned veteran of the Crimean Tatar national movement and human rights defender, was sentenced, after an armed search and detention, to 15 days’ imprisonment.  The pretext used was a video posted on social media (of a song in which a Soviet march is compared to the Nazis).