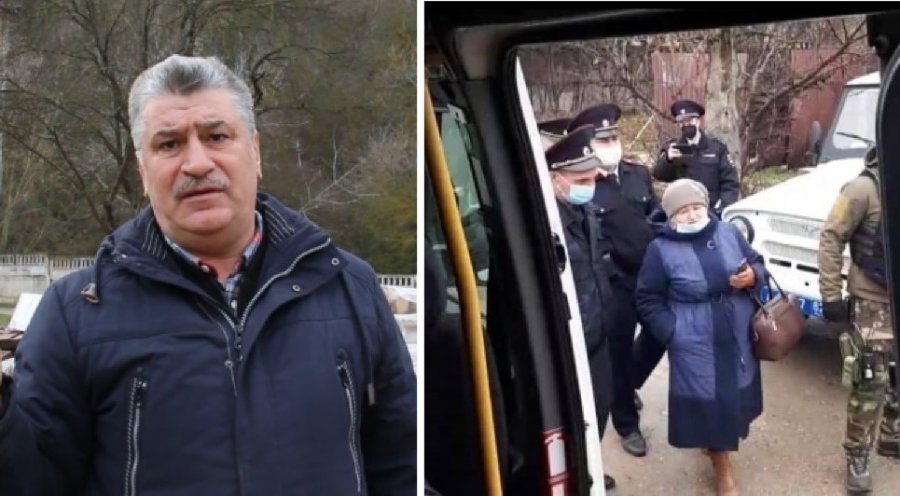 A ‘court’ in Russian-occupied Crimea has jailed Edem Dudakov, Delegate to the Qurultay, or National Assembly, of the Crimean Tatar people, for ten days, officially over a comment under a Facebook post in 2017.   Dudakov was detained on 17 February, nine days after he reported the latest irreparable damage which Russia has caused the Khan’s Palace, or Hansaray, in Bakhchysarai, an extremely important monument of Crimean Tatar heritage.  The armed search on Thursday and the Bakhchysarai  District Court’s 10-day prison term on 18 February seem clearly in retaliation for his courage in speaking out.   15 Crimean Tatars are still in custody after being detained merely for trying to attend the ‘court hearing’ on Friday morning.  Those in custody include Zodiye Saliyeva, veteran of the Crimean Tatar national movement and mother of political prisoner Seiran Saliyev.

Dudakov is the Deputy Head of the Qurultay’s Audit Commission and the former head of the Crimean Committee on Inter-Ethnic Relations and Deported Peoples.  An architect by profession, he has played an absolutely crucial role over the past four years in alerting Ukraine and the world to the damage that the Russian occupation regime’s supposed ‘restoration’ work at the Khan’s Palace is causing.

Officers from the so-called ‘Centre for countering extremism’ and armed enforcement officers turned up at Dudakov’s home in Bakhchysarai at around 6.45 a.m. on 17 February.  The ‘search’ continued until after 9 a.m., with the men taking Dudakov away with them at 9.40.  Three lawyers, Emine Avamileva; Edem Semedlyaev and Nazim Sheikhmambet were all illegally prevented from being present. This is standard lawlessness, but Semedlyaev was told that he had “arrived too late”.  Presumably, he noted, he is expected to be with his clients night and day.  The absurdity of this is accentuated by the lack of any grounds for expecting Dudakov to require legal assistance.  Semedlyaev was even forced to stand 15 metres away from the house, with the order seemingly from the same head of the ‘centre’, Ruslan Shambazov, who was behind Semedlyaev being jailed for 12 days and fined for representing a client and for refusing to strip naked.   The other ‘Centre’ officer was Aleksandr Kozhushny.

According to Dudakov’s relatives, the ‘officers’ removed the family’s mobile phones and electronic gadgets.  The pretext for the warrant, apparently issued by the occupation Kievsky District Court, was a purportedly ‘extremist utterance’ by Dudakov in 2017 in his comments over an article.  This is claimed to have ‘incited inter-ethnic enmity’, with an administrative charge laid under Article 20.3.1 of Russia’s code of administrative offences.  The charge can carry up to a 15-day term of imprisonment, with Dudakov being held at the police station in Bakhchysarai under the ‘court hearing’ on 18 February.  Semedlyaev was also prevented from seeing Dudakov at the police station.

Graty reports that the comment which is being used as pretext is from Dudakov’s own Facebook page on 6 November 2017.  The comment was under an article about a mother living in Tatarstan who was demanding ‘compensation’ because her son was “forced to study the Tatar language.”  Dudakov’s comment was certainly extremely critical, however the ‘Centre’ is, at very least, extremely selective in where it chooses to find indictment.  You can find any number of comments, social media posts, or even the Russian state-funded ‘Russia Today’ television or YouTube programs that use significantly worse language, for example, about Ukrainians, with no reaction ever elicited. 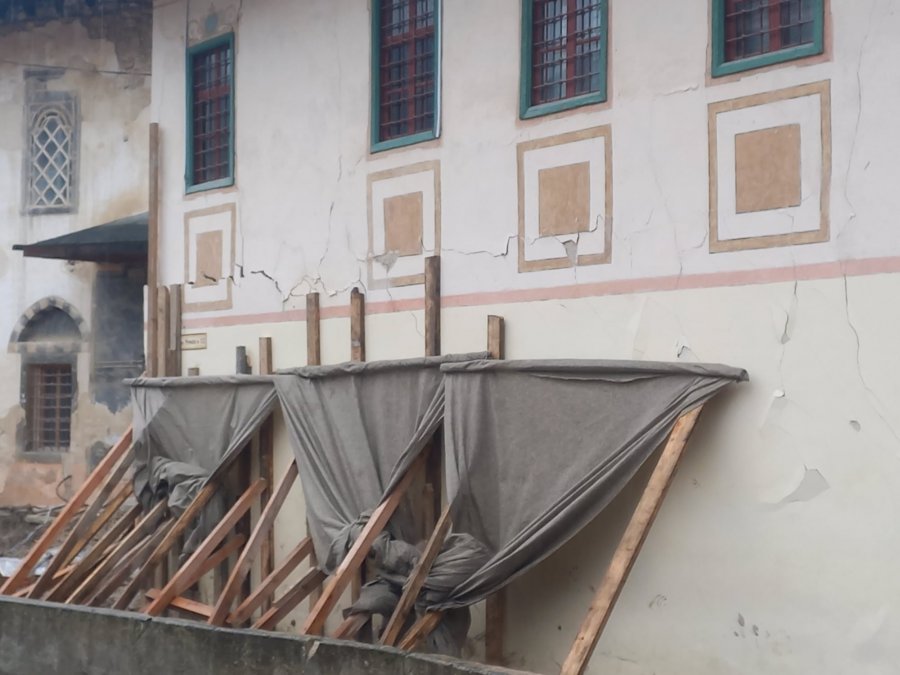 Both vertical and horizontal cracks which Dudakov, who posted this photo, says indicates the seriousness of the problem

As mentioned, it was thanks to Edem Dudakov in the first instance that shocking photos were made public on 8 February demonstrating new and probably irreparable damage to part of the Hansaray complex.  A large crack has appeared on the wall of Svitsky Corpus, one of the buildings of the Khan’s Palace.  As reported, even the Russian-controlled media did not try to conceal the damage, but they did speak to those with a vested interest in claiming that this was no major problem and could be rectified.  At the time, Dudakov reported that, while he was videoing the damage to the Khan’s Palace, a film crew from the Russian-controlled Krym-24 appeared.  They had presumably been primed how to present the damage, with the narrative being that for 20 years Ukraine had supposedly done nothing, and that this was, purportedly, the result.

Dudakov was blunt in saying that the problem lies “in the disastrous engineering illiteracy of the fly-by-night firms, starting from the designers and ending with those carrying out the jobs whom the authorities hire on the principle, “you help me, I help you”.   These firms have had a licence, at best, for two or three years, with the Khan’s Palace, in many cases, their first restoration job.”

He mentioned, not for the first time, that most of the men actually working on the Khan’s Palace are migrant workers, with the design and supervision carried out by firms that were unknown prior to 2014.  This latest damage is only the latest result of such barbarism, with the destruction reported here earlier of artefacts and elements of cultural heritage.

Dudakov noted that the work commenced, without proper specialist consultation and preparation, in the winter of 2017 was claimed to have been needed because the roof of the Mosque was about to collapse.  He presented video proof that the Mosque had been in fairly good condition, and suggested that this was always about getting access to large amounts of funding.

He pointed out that there had been no comprehensive expert assessment on the Khan’s Palace in 2020 and doubted that one had been carried out since then. He was dismissive of the claims made by Ilya Alymchev, the head of the ‘Directorate on centralized service and development of cultural institutions’, that, for example, the Svitsky Corpus had proven to have no foundation. The building would not have survived intact for 300 years without a foundation, and the 1927 earthquake is evidence of how strong the wall was.  The real reason, he said should be sought in a series of engineering mistakes back at the beginning of 2017, many of which he set out in detail at the time.

The fact that Dudakov has now come under attack in this way is undoubtedly because of his public statements and commitment to preventing such barbaric destruction of the Khan’s Palace.

The Khan’s Palace in Bakhchysarai was placed on UNESCO’s World Heritage Tentative List back in 2003, but the necessary work for establishing its international status was unfortunately not completed.  Russia is essentially preventing a UNESCO fact-finding mission by insisting that such a mission travel on documents provided by the country illegally occupying Ukrainian Crimea, something that the UN body can clearly not do. It seems clear, however that even the destruction so far caused this monument of considerable historical and cultural importance for the Crimean Tatar People, and for Ukraine in general, is likely to have destroyed any likelihood of such UNESCO recognition.  The complex, which includes the Palace itself, a hall for receiving visitors, two mosques, a harem and other buildings, was built as the main residence of the monarchs of the Crimean Khanate, and was the political, religious and cultural centre of the Crimean Tatar community until the collapse of the Khanate in 1783.

The first clear evidence of the scale of the wanton vandalism underway came at the beginning of January 2018 when the first photos were smuggled out of the site. Instead of employing specialists and making maximum use of the same materials and technology, the Russian occupiers had passed the work to a construction firm called Kiramet, working for the Moscow-based Atta Group Architectural and Planning Holding as General Contractor. Needless to say, none had any relevant experience.

There was massive devastation from the outset, with some of it clearly involving corruption.  In a video posted on 11 April 2018, Dudakov showed how the original hand-made tiles, called Tatarka, were being replaced in full by factory-produced ‘old-style’ Spanish titles.  While individual Tatarka tiles had needed to be replaced, there was absolutely no justification for removing all of these infinitely richer and authentic tiles.  Dudakov assumed that the boring factory-produced Spanish tiles had been chosen because they were easier to lay, because they did not have any specialists working with Tatarka files, and also because they were easier to loot.  The original Tatarka tiles had reportedly already been sold, with this quite likely what happened to the authentic oak beams which were also unnecessarily removed.Even where there was no obvious aim to plunder, the fact that the work was carried out by construction workers without any experience in restoration meant that huge damage was done.  The walls became damp, and no attempt was made to protect the wall paintings which were simply disintegrating.   Dudakov reported that these barbarians had decided that one calligraphic fresco on the eastern façade “was of no value” and had effectively destroyed it.

Heavy construction equipment, such as hydraulic drills, had been used for dismantling work, with this causing vibration and the loss of part of the wall’s finish. Video footage posted in March 2019 showed how ordinary workers were carrying out ‘excavation’ work around the Big Khan Mosque, the Khan Cemetery and the Stables (see: ‘Closed for Destruction’: Russia is digging up 16th Century Crimean Tatar Khan’s Palace )

In November 2018, it had become clear that another Russian firm, unencumbered by specialist knowledge or experience in restoration, had ‘won a tender’ for the so-called restoration work.  What the St. Petersburg-based Meander Company lacked in appropriate skills for the job, it made up for in corrupt connections, most probably with the then Russian Minister of Culture, Vladimir Medinsky.  Meander was, at the time, winning a suspicious number of high-cost tenders for supposedly ‘restoring’ the places of cultural heritage that Russia has illegally appropriated in annexed Crimea (more details here).

Meander’s General Director and her former deputy were arrested in the autumn of 2020 on charges of embezzlement, and the Russian occupation regime began looking for new contractors, with two appointed in the middle of February 2021.  Once again, these were Russian, with no obvious experience of restoration work.

Details and images were released in March 2021, indicating the degree to which Russia had, at that stage, damaged the Khan’s Palace, in clear violation of, among other documents of international law, the Hague Convention of 1954 for the Protection of Cultural Property in the Event of Armed Conflict 1999, and Second Protocol