Almost 400 Russian war crimes already documented in Ukraine Russia has bombed or shelled at least 136 hospitals in Kharkiv, Mariupol and other Ukrainian cities Russian invaders take Mariupol intensive care hospital and its patients hostage Mass graves of the Ukrainian civilians Russia claims it is not killingTerror and abductions as Russia tries to break Ukrainian resistance in Kherson and other occupied citiesUkrainian journalist Oleh Baturin feared abducted by Russian invaders in Kherson oblast Mayor of Melitopol Ivan Fedorov abducted after refusing to collaborate with the Russian invaders Russian priest arrested and prosecuted for sermon opposing Russia’s war against Ukraine Russia effectively admits it deliberately bombed the maternity hospital in Mariupol that killed three patients, including a childRussia brings grotesque propaganda to Berdiansk after Ukrainian journalists refuse to collaborate Russian invaders murder Ukrainian volunteers Impassioned appeal from Ukrainian Muslim leader in face of Russia’s war to destroy Ukraine Russia is forcing Ukrainians from occupied Crimea and Donbas to fight in its invasion of Ukraine Children among the dead after Russian invaders opened fire on fleeing civilians Russia installs its propaganda TV after seizing Kherson and imposes 15-year sentences for reporting its invasion of UkraineUkrainian survivors of the Holocaust demand Putin and Russia get out of Ukraine Russia continues its carnage, flouting binding order from ECHR to stop bombing civilians in UkraineBabyn Yar bombed by Russia, 80 years after Nazi Massacre of Ukrainian Jews Russia proposes 15-year sentences and threatens "treason charges" for telling the truth about its war crimes in UkraineRussian schoolchildren told that Russia is bombing and killing Ukrainian children in ‘self-defence’
• Topics / War crimes 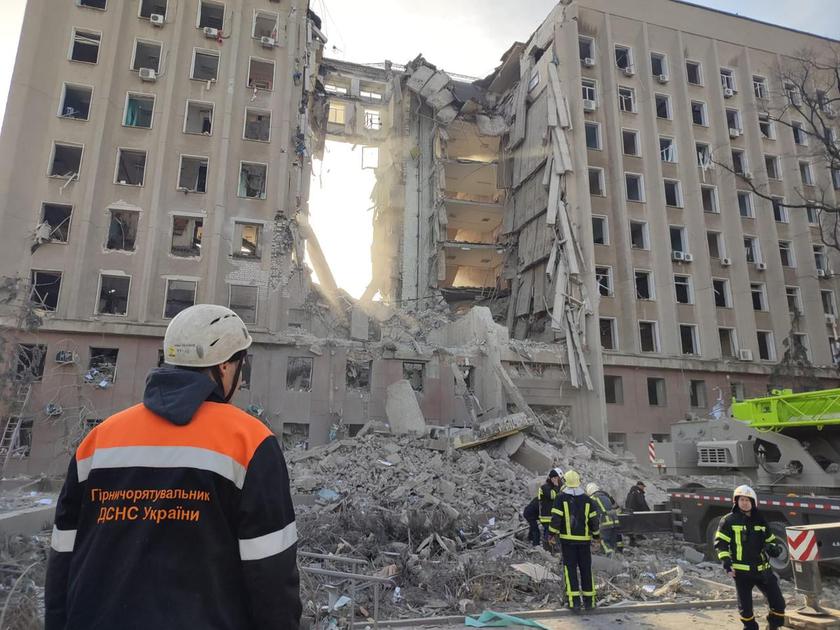 Mykolaiv Regional Administration after Russian attack at around 8.45 on 29 March Photo Emergency Service

The Russians chose 8.45 a.m. to fire a missile at the Mykolaiv Regional Administration on 29 March, gutting the middle of the huge building.  It was pure chance that Mykolaiv Governor Vitaly Kim overslept, since his office was right where the missile hit, leaving a gaping hole where several storeys of the building had stood  The Russians undoubtedly knew that they would be killing civilians.  Whether they hoped to kill the Head of  remains unclear.  The strike did, however, come a day after Kim reported remembrance events in Mykolaiv marking the 78th anniversary of the city’s liberation from Nazi invaders and pointed out that they were now busy trying to liberate the oblast from the Russian invaders.

This attack on Mykolaiv came just days after Russia claimed that its ‘first phase’ was over and that it would be now shifting its focus to, what it called, ‘liberating’ the Donbas, in the east of Ukraine.  There was much discussion in the international media about the implications of this alleged change, just nothing to indicate that the words should be believed.  Russia continued bombing and shelling Kharkiv in particular, but also Kyiv and Chernihiv.  Nor does the ongoing destruction of Mariupol and other cities in the Donbas region bear any resemblance to the actions of a ‘liberator’.

On 29 March, for example, Russia bombed another residential building in Severodonetsk (Luhansk oblast), killing an 86-year-old woman. It also shelled a Severodonetsk hospital, killing two people and injuring ten others.

Over the last 24 hours, the Russians shelled parts of Kharkiv and the oblast 46 times.  Two missiles were fired at Liubotin, killing one person and injuring others.

As of 29 March, Russia has now claimed that it will radically “reduce its military activities in the Kyiv and Chernihiv areas”.

It made no mention of stopping its blockade and savage destruction of Mariupol, nor the endless bombing and shelling of Kharkiv and the Kharkiv oblast.  It is, on the contrary, likely that this so-called 'reduction' would be in response to its failure to seize Kyiv, and would lead to more troops and hardware being directed at its aggression against Kharkiv and the Donbas.