Mass grave at Bucha (Kyiv oblast), Ukrainian soldier rescuing a baby during the first day of evacuating residents from the neighbouring city of Irpin (before the Russians shot at those fleeing)

67 residents of Bucha in the Kyiv oblast were buried in a mass grave on 10 March, with some of the victims of Russia’s unending shelling unidentified.  Like in Mariupol, Russia’s relentless bombing and shelling leave the Ukrainian authorities with no alternative, but to resort to such mass graves, another bitter echo from the Nazi occupation 80 years ago.  Most, if not all, of the victims in both cities were the civilians, mostly women and children, whom Russia is still denying that that it is killing.

The denials are staggering.  Russian leader Vladimir Putin’s press secretary Dmitry Peskov claimed on 14 March that Russia’s so-called ‘special operation’ was going to plan and that their sophisticated weapons were “hitting only items of military-informational infrastructure”.  The state-controlled RIA Novosti ends each report by quoting the defence ministry which claims that its armed forces “strike only military infrastructure and Ukrainian soldiers”.

Essentially all television in Russia and occupied Crimea is under state control and does not show the incessant bombing and shelling of entire apartment blocks, schools; hospitals and other clear civilian targets in Kharkiv, Mykolaiv and Mariupol.  On 14 March, RIA Novosti was silent about the Russian bombs that hit an apartment block in the Obolon district of Kyiv, killing at least one person.  Instead, they claimed that a Ukrainian bomb hit the Government House in occupied Donetsk, with this called a ‘war crime’.

Those who believe that only Putin and his immediate circle are to blame for this war and the atrocities being committed would do well to consider how many Russians are directly involved in the huge media operation now underway to distort and conceal the real facts.

It is not only the media that are complicit. Ukraine and the world saw the horrific footage after Russia bombed a children’s and maternity hospital in Mariupol on 9 March.  The Russian embassy in the UK reacted by claiming that the hospital had not been operational and that the women injured in the bombing were really ‘actors’. The lie was so outrageous that Twitter removed two of the embassy’s posts.  On 11 March, Russian foreign minister Sergei Lavrov effectively admitted that Russia had targeted the hospital, but claimed, without a shred of evidence, that it had been taken over by the Azov Battalion and was therefore not a civilian target.  It was reported on 14 March that one of the women, who was seen on a stretcher being rushed out of the bombed hospital, has died, together with her unborn baby. 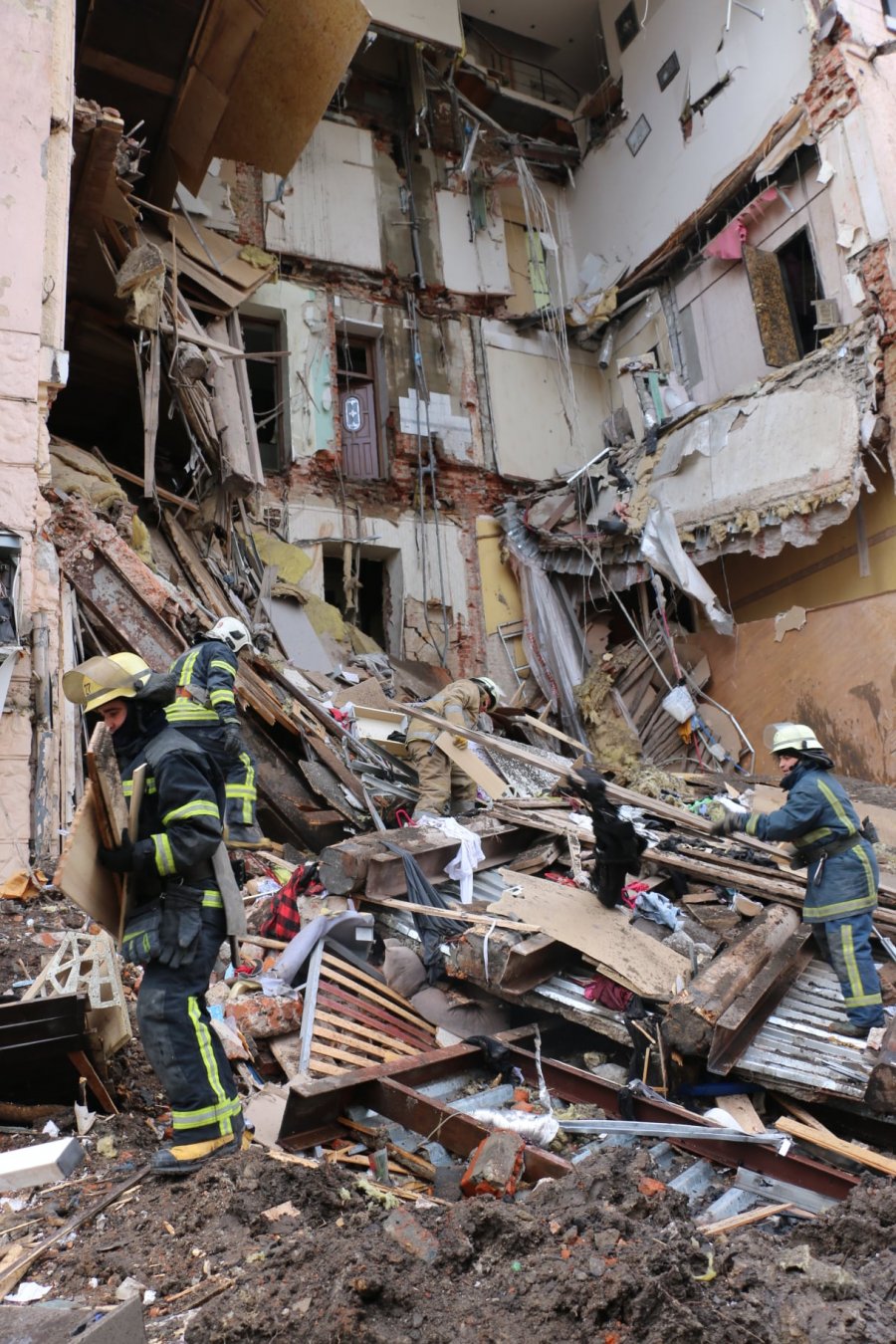 Kharkiv devastation after Russian bombing of apartment blocks 14.03.2022 Photo Kharkiv Regional DSNS i
It takes huge engagement by virtually all Russian ministries, as well as the state censor Roskomnadzor; enforcement agencies;  by school directors and teachers, by Internet trolls, etc, to ensure that Russians are fed official lies about Russia’s war against Ukraine.

Various Russian or international media have tracked down the mothers or wives of men sent to kill Ukrainians, and pass on stories of how “nobody knew”.  It is extremely likely that Russian conscripts, as well as those forcibly mobilized in occupied Donbas, were deceived about where they were being sent.  They can and should surrender, not obey the criminal orders of their leadership.  Those who are dropping bombs, night after night, on Kharkiv, on Mariupol and other Ukrainian cities, cannot fail to know that they are bombing civilians.  Those Russians on the ground, shelling Irpin, Bucha and other cities near Kyiv are equally well aware whom they are killing.  At least eight civilians, including three members of one family, were killed as they tried to flee from Irpin, despite a promised safe corridor.

It also takes considerable effort to believe those lies, since the facts, despite all of the draconian legislation and other measures which were swiftly imposed to silence people, can very easily be accessed on the Internet.

They would see, without any difficulty, the deaths and devastation that Russia is deliberately inflicting on Mariupol, Kharkiv, Mykolaiv.  They could type a word or two (in Russian!) on Google, and they would learn that the Mariupol city authorities estimated on 13 March that at least 2187 civilians had been killed since the beginning of the war, due mainly to at least 22 bombings of the city.  They would learn also why none of these figures, whether in Mariupol, or Kharkiv or Irpin, can in any way reflect the real horror.  Russia is not letting up its bombing and shelling for long enough to allow bodies to be retrieved, for the rubble of buildings to be fully cleared, and for all of the victims, including elderly people unable to easily move to basements or bomb shelters, to be counted.

They could also type in ‘mass burials’ and would find the photos of huge common graves, not from the Second World War that their leaders talk so much about, but from the Russian bombings of Ukrainian men, women and children in 2022.