Russian invaders murder Ukrainian volunteers Impassioned appeal from Ukrainian Muslim leader in face of Russia’s war to destroy Ukraine Russia is forcing Ukrainians from occupied Crimea and Donbas to fight in its invasion of Ukraine Children among the dead after Russian invaders opened fire on fleeing civilians Russia installs its propaganda TV after seizing Kherson and imposes 15-year sentences for reporting its invasion of UkraineUkrainian survivors of the Holocaust demand Putin and Russia get out of Ukraine Russia continues its carnage, flouting binding order from ECHR to stop bombing civilians in UkraineBabyn Yar bombed by Russia, 80 years after Nazi Massacre of Ukrainian Jews Russia proposes 15-year sentences and threatens "treason charges" for telling the truth about its war crimes in UkraineRussian schoolchildren told that Russia is bombing and killing Ukrainian children in ‘self-defence’ Putin miscalculated. Russia is fighting “an army of 40 million Ukrainians” Chief Rabbi of Ukraine demolishes Putin’s excuse for Russia’s invasion Russia bombs a Ukrainian kindergarten and apartments in its war against independent Ukraine Putin will continue attacking until Russia is stopped. Help Ukraine defend its freedom today!Russian Rule of Lawlessness in Occupied Crimea and DonbasRussia effectively admits it deliberately bombed the maternity hospital in Mariupol that killed three patients, including a childRussian priest arrested and prosecuted for sermon opposing Russia’s war against Ukraine Mayor of Melitopol Ivan Fedorov abducted after refusing to collaborate with the Russian invaders Russia uses terror and abduction in attempt to force schools to collaborate in occupied Melitopol Ukrainian journalist Oleh Baturin feared abducted by Russian invaders in Kherson oblast
• Topics / Terrorism
• Topics / Freedom of expression
• Topics / War crimes 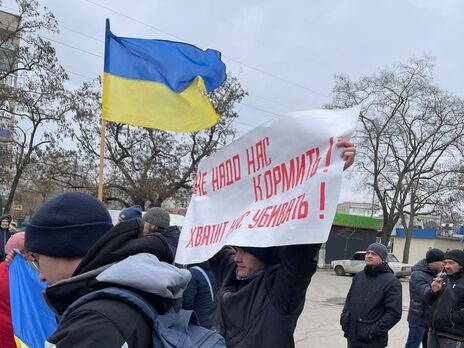 Ukrainians protesting against the Russian invaders who have seized Berdiansk. The placard reads You don’t need to feed us, stop killing us Photo from pro.berdiansk.biz

A day after Russian invaders held a large number of Ukrainian journalists hostage, trying in vain to get them to collaborate,  the occupying forces in Berdiansk (Zaporizhya oblast) have launched their own propaganda radio station.  The narrative is that pushed by Russian leader Vladimir Putin, with no attempt made to explain how the savage bombing of Ukrainian cities and killings of Ukrainian civilians can be explained by Russia’s purported wish “not to allow a repetition” of World War II.

On 8 March, Russian soldiers first the Berdiansk radio station ‘Azovska Khvylya’ [‘Azov Wave’], with the Zaporizhya Regional Military Administration issuing a warning to local residents that the station might be used to circulate anti-Ukrainian disinformation and propaganda.

The Russians also seized the building of the local media holding ‘PRO100’, which includes the ‘South’ TV company; Azovska Khvylya; Novyny Berdianska [News of Berdiansk] and at least two other publications. At 10.50 an urgent message was posted on , stating that the armed Russian soldiers were holding around 50 members of the editorial office hostage. “Russian propaganda is being played on the radio. And there’s a sniper on the roof”

Around six hours later, Serhiy Tomilenko, Head of Ukraine’s National Union of Journalists, that the staff of PRO100 had been held by force in the building with the Russians trying to persuade them to collaborate with the invaders and form their propaganda mouthpiece.  One of the employees explained that none of the armed intruders were local, but that some were clearly individuals with technical knowledge.  This, it should be said, was exactly what Russia did when its fighters seized control of cities in the Donetsk and Luhansk oblasts in 2014, cutting off Ukrainian channels and replacing them with Russian propaganda.

The staff remained firm in rejecting such collaboration and were eventually able to leave.

On 9 March, the Russians launched a propaganda radio station, with Detector Media of the first messages broadcast.  The Russians’ claim is that they are “clarifying the picture of events”; that Ukraine is supposedly “in an information vacuum” and that “a misunderstanding” has arisen in the city administration and among the population regarding the presence of Russian occupation forces.  They essentially parrot the Kremlin’s highly specifical view of historical events, including the claim that the government that emerged after President Viktor Yanukovych and his people fled the country was “illegal”  There are various other common claims about supposed ‘fascists’ in Ukraine, about nationalists, etc.

The level of propaganda is stunningly poor.  The Russians say that “in each of our families” there was someone who fought “against the brown plague” and that they are, purportedly, calling on Ukrainians “to not allow this history to be repeated”.  This call is made by the Russian invaders who have been systematically bombing Ukrainian cities and killing civilians on a scale last seen during the Nazi (‘brown plague’) invasion 80 years ago

The propaganda continues as follows: “It is in these difficult conditions that the Russian leadership decided on the demilitarization and denazification of Ukraine. It is necessary to disarm the illegal armed formations acting on Ukrainian territory and stop the activities of nationalist structures. Our joint task is to reinstate the normal work of the state authorities, industry and business and to create the conditions for the uniting of the Russian Federation and Ukraine.”

The invaders claim that it is they who are making it safe for local residents to, for example, visit cemeteries, and that what is happening “is defence of Russia itself”.

In Berdiansk, like in Kherson, the Russian invaders have thus far been unable to terrorize Ukrainians from coming out each day in protest at their violent occupation of their Ukrainian cities.