Russia continues its carnage, flouting binding order from ECHR to stop bombing civilians in UkraineBabyn Yar bombed by Russia, 80 years after Nazi Massacre of Ukrainian Jews Russia proposes 15-year sentences and threatens "treason charges" for telling the truth about its war crimes in UkraineRussian schoolchildren told that Russia is bombing and killing Ukrainian children in ‘self-defence’ Putin miscalculated. Russia is fighting “an army of 40 million Ukrainians” Chief Rabbi of Ukraine demolishes Putin’s excuse for Russia’s invasion Russia bombs a Ukrainian kindergarten and apartments in its war against independent Ukraine Putin will continue attacking until Russia is stopped. Help Ukraine defend its freedom today!Russian Rule of Lawlessness in Occupied Crimea and DonbasLife sentence in Ukraine’s first war crimes trial since Russia’s total invasion but questions remain Russian soldiers given long sentences in Ukraine for bombing civilian targets in Kharkiv oblast Prominent Ukrainian activist Roman Ratushny killed defending Ukraine against Russian invaders "Death sentences’ of British & Moroccan POWs in occupied Donbas show clearly why Russia must be driven out of all of Ukraine Over 60 places of worship in Ukraine, as well as sites of cultural heritage, have been attacked by the Russian invaders, with some totally destroyedRussian invaders kill 96-year-old Ukrainian Holocaust survivor ‘International institutions must protect Ukrainians from abductions and executions’, Ukrainian SCOsRussia has already greatly surpassed the Nazi Third Reich by insidiously launching missile and bomb attacks on UkraineStand With Ukraine! Address to the International Community by Ukrainian Human Rights DefendersA brief description of KHPG strategic litigations in January–June 2018A brief description of KHPG strategic litigations in January–December 2017
• Topics / War crimes 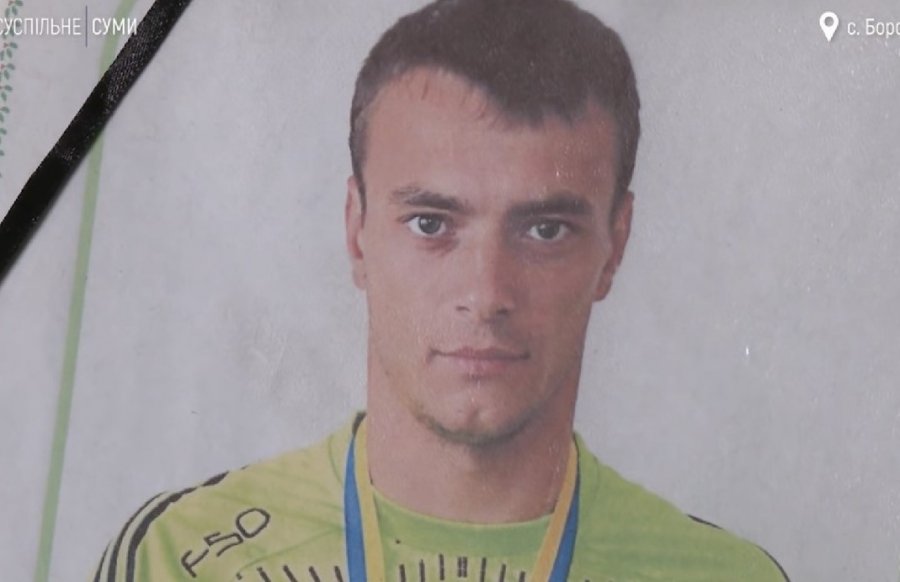 Among the victims of Russian war crimes in the Sumy oblast was Serhiy Pronevych, a Ukrainian marathon runner, who had got into the 2019 Ukrainian Guiness Book of Records by running a 42 kilometre marathon in full military gear.  The 30-year-old from the village of Boromlya was not a soldier, but was active in the civic territorial defence after Russia’s invasion on 24 February, for which he was not only seized by the Russian invaders, but tortured to death.

Pronevych had plans for a family of his own that will never be realized.  His mother, Antonina showed Suspilne journalists the certificates and medals her son had received, as well as his woodwork and other crafts.  She and other residents of Boromlya had been frantically searching for Serhiy since he disappeared on 12 March, but it was only on 29 March that his body was found.  The Okhtyrka District Prosecutor initially stated only that he had been killed, but initiated criminal proceedings over violation of the laws and customs of war (Article 438 § 2 of Ukraine’s Criminal Code), and he was almost certainly subjected to torture.

The Okhtyrka and Trostianets raions of the Sumy oblast came under Russian attack from 24 February, with Trostianets, which is near Boromlya, under Russian occupation from 1 March until it was liberated on 26 March.

Antonina Pronevych explains that her son was in the territorial defence, in some kind of reconnaissance group, and reported to the Ukrainian side where Russian tanks, etc. were located or moving.  His mother does not know all the details, but there seems to have been an ambush, or they came upon some Russians and this led to a shootout.  All contact with Serhiy was lost on 12 March, however it is clear that he was not killed outright.  She has been told that he was held in a basement, and that it was there that he was tortured.  She says there were visible marks on his wrists from handcuffs or similar.

Whether or not Pronevych’s involvement in the territorial defence made the Russians view him as a target, it was a clear war crime to torture him to death.

The Russian invaders have also used similar methods against several civilians.  Another Boromlya resident, identified only as Ihor, spoke to Suspilne from hospital on 21 March.  He had been seized by the Russians near his home.  He says that they had beaten him for around an hour and had broken his jaw, as well as delivering multiple blows to the head.  They had tried to cut off his finger, but finally settled for breaking it..  Ihor’s speech was seriously impaired, his hand bandaged, and his appearance generally made it clear how savage the attack had been.

Although the Russian soldiers did look at his phone to find contacts, their main aim appears to have been robbery.  There were around ten of them, Ihor says, and they even ripped a cross on a chain from his neck and some rings.  He had a food store in the village which has been devastated, and they stole around two and a half thousand dollars.

Ihor was finally released, but could only get to the hospital three days later, because he had to wait for a safe corridor or face being shelled or shot at.

Ihor was only one of many such victims.  As of 21 March, Ukrainian prosecutors had initiated proceedings over around 120 similar war crimes in the Sumy oblast, however the final figure is likely to be higher.

On 1 April, the Prosecutor General’s Office reported that two bodies of civilians had been found in liberated Trostianets, with a criminal investigation over war crimes initiated under Article 438 § 2.  The two bodies had been found on 30 March, bound and with gunshot wounds. Both men were civilians whose families had reported them missing several days earlier.