Putin miscalculated. Russia is fighting “an army of 40 million Ukrainians” Chief Rabbi of Ukraine demolishes Putin’s excuse for Russia’s invasion Russia bombs a Ukrainian kindergarten and apartments in its war against independent Ukraine Putin will continue attacking until Russia is stopped. Help Ukraine defend its freedom today!Russian Rule of Lawlessness in Occupied Crimea and DonbasRussia proposes 15-year sentences and threatens "treason charges" for telling the truth about its war crimes in UkraineBabyn Yar bombed by Russia, 80 years after Nazi Massacre of Ukrainian Jews Russia continues its carnage, flouting binding order from ECHR to stop bombing civilians in UkraineUkrainian sportsman tortured to death by Russian invadersUkrainian survivors of the Holocaust demand Putin and Russia get out of Ukraine Russia installs its propaganda TV after seizing Kherson and imposes 15-year sentences for reporting its invasion of UkraineCrimean teacher dismissed and threatened with prosecution for telling students the truth about Russia’s war against UkraineChildren among the dead after Russian invaders opened fire on fleeing civilians Russia is forcing Ukrainians from occupied Crimea and Donbas to fight in its invasion of Ukraine Russian soldiers risk prison or injure themselves so as to not fight in Ukraine Impassioned appeal from Ukrainian Muslim leader in face of Russia’s war to destroy Ukraine Russian invaders murder Ukrainian volunteers Russia brings grotesque propaganda to Berdiansk after Ukrainian journalists refuse to collaborate Russia effectively admits it deliberately bombed the maternity hospital in Mariupol that killed three patients, including a childRussian priest arrested and prosecuted for sermon opposing Russia’s war against Ukraine
• Topics / War crimes 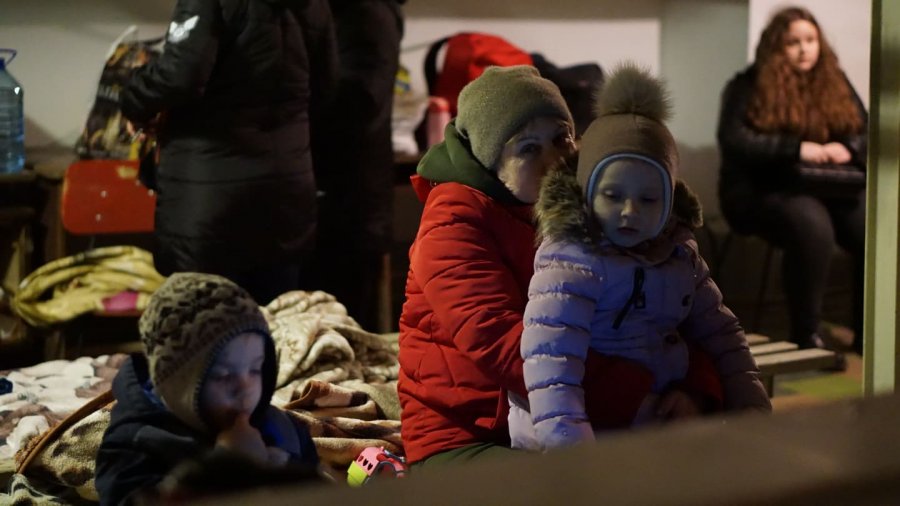 While bombing residential areas throughout Ukraine and killing civilians, the Russian regime is sending instructions to Russian schools on how to present such war crimes as “self-defence”.  Mediazona has received information and even copies of the instructions Russian teachers have been given for a special ‘social studies lesson’ to be held in all Grade 7-11 classes on 1 March.   This comes at a time when Russian state media are presenting Russia’s invasion as “a special military operation” and largely parroting the Kremlin’s preposterous claims about this being aimed at the so-called ‘demilitarization and denazification’ of Ukraine, a country whose population overwhelmingly elected a Jewish President in 2019.

Teachers have been instructed to present the ‘arguments’ given by Russian leader Vladimir Putin for what he called ‘a special military operation’ and to condemn calls to take part in anti-war protests.  Such protests are by no means sufficient given Russia’s totally unprovoked invasion of Ukraine, but they are taking place throughout the Russian Federation with several thousand demonstrators detained (and doubtless later facing administrative fines).

Mediazona reports that it is aware of such ‘lessons’ being scheduled in Moscow and three different regions of the Russian Federation.  They have been sent copies of the instructions for  Grades 7 – 8, Grade 11 and ‘advice’ to parents (from different parts of the country) which they publish in full.

The 7 or 8 Grade teacher is essentially supposed to repeat Putin’s highly dubious historical claims about Ukraine and then to say the following:

“We, Russia, have always supported and cared about Ukraine – because we are one people and there cannot be any hatred between our countries.”

These words, it should be stressed, come as Russia is inflicting huge casualties through its bombing of residential areas in Kharkiv and Kyiv, and with its invading soldiers having shot and killed at least one entire family, including two children.

The teacher is then instructed to churn out the Kremlin’s narrative about events since Euromaidan, claiming that the end of the Revolution of Dignity in February 2014 was “a state coup”.   The bloodshed from riot police gunning down peaceful protesters which led to ex-President Viktor Yanukovych fleeing to Russia is claimed to have been part of the supposed ‘coup’.  It is asserted that “part of the population of this country did not accept the coup”, namely those in Crimea and “in Donbas”.  No mention is made of the Russian soldiers who seized control of Crimea, nor of the armed fighters from Russia who then focused on taking cities in Donbas by force.  Nor is it specified that by ‘Donbas’ is meant only around one third of the Donetsk and Luhansk oblasts.  The teacher then provides a totally distorted account of the events in Donbas in 2014, reaching a crescendo of lies with the following:

“Russian initially did everything to resolve all contradictions through peaceful means and by a peaceful path.  Nonetheless, the Kyiv authorities twice carried out military punitive operations on this territory and, at the present time, we are witnessing an escalation in the situation for the third time.”

The teacher claims that it was in Donbas that people have had to take shelter, with their children, in basements, and will be saying so at a time when people in cities all over Ukraine have been almost living in basements or the metro because of Russian bombing, including from Belarusian territory.  S/he will then go on to repeat the narrative about Russia having made and supposedly continuing to make efforts to “resolve all complicated and tragic issues” peacefully.  All the blame for the carnage is thus claimed to lie elsewhere, and be because  “neither the Kyiv authorities nor the western community are keeping to prior agreements and are building up Ukraine’s military force, helping  with arms, specialists and launching information campaigns on inciting anti-Russian policy”.

The teacher should then say that “Russia has always defended the interests of its people and is upholding them now”.

One can safely assume that no mention will be made of Russia now claiming to have to defend “Russians” who are, in fact, Ukrainians, to whom it has been illegally issuing its citizenship since 2019.  Nor will the teacher want to touch on the devastating impact on ordinary Russians’ lives following the totally justified imposition of international sanctions.

Instead, students will hear part of Putin’s address.

The answers to anticipated questions are even more surreal.  If asked if this is a war against Ukraine, and could it have been avoided, the teacher should say it is not a war but “a special peacekeeping operation”.  This is supposedly to “restrain the nationalists who are persecuting the Russian-speaking population”

“Its aim is to defend people who, over 8 years, have been subjected to ill-treatment, genocide from the Kyiv regime. And for this we will aim at the demilitarization and denazification of Ukraine….”

<>  “The special military operation is a forced measure to save people in Ukraine”.

Since the early hours of 23-24 February, Russia has been bombing Kyiv and other cities, and deploying tanks and soldiers to try to seize control of major Ukrainian cities.  The cities that have come under particular attack include the predominantly Russian-speaking Kharkiv and Odesa.  Although there are claims from Russia and its proxy ‘Donetsk and Luhansk republics’ that the latter are facing shelling, there is no reason to believe this to be true.  Ukraine’s Armed Forces are most certainly otherwise engaged, with the onslaught from Russia, occupied Crimea and Belarus meaning that they are needed throughout the entire country to defend civilians and prevent armed seizure by an invading power.

The claim that Russia is not trying to occupy more of Ukraine is as lacking in credibility as was Moscow’s constant denial over the last two months or more that it was planning to invade Ukraine.  Putin’s call on Ukraine’s Armed Forces to betray their oath to Ukraine, topple or abandon the latter’s democratically elected leaders and lay down their weapons has aroused only greater determination to defend the country and its people.

Russian forces were able to seize control of the port city of Berdiansk on 28 February.  They were confronted by a huge crowd of Ukrainian men and women of different ages, calling them bandits and invaders and telling them to get out of Ukrainian territory.  This is just one of many examples of Ukrainians mobilizing to defend their country from the Russian aggressor.