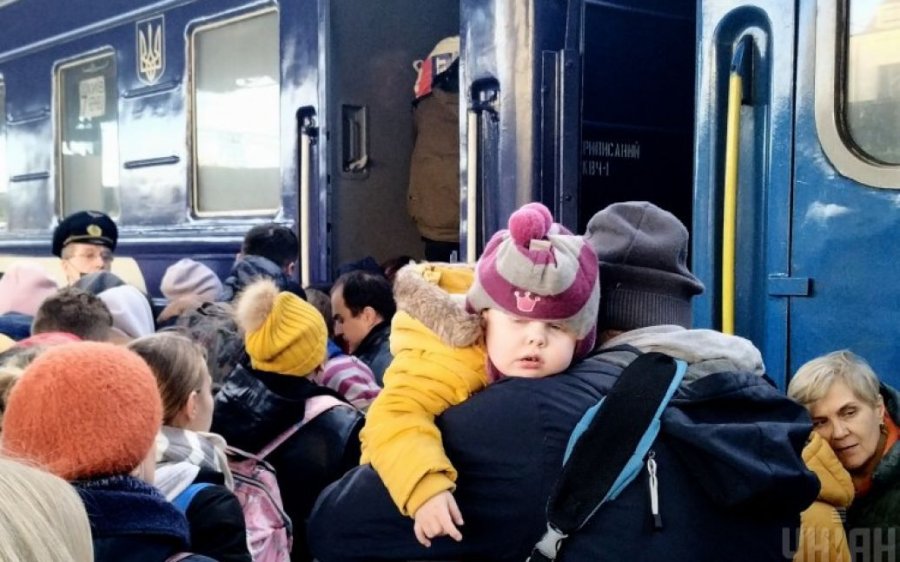 Scroll down for update on the first blocking

A Russian airstrike has bombed railway tracks near Barvenkove Station in the Donetsk oblast, thus blocking the route by which three evacuation trains were due to take civilians away from Sloviansk, Kramatorsk and Lyman.  There are serious fears of a major offensive by the Russian invaders, and Ukrainian residents of those three cities learned back in 2014 what Russian occupation brings.

The Head of Ukrainian Railways, Oleksandr Kamyshyn, reported in the evening of 7 April that, through the airstrike, the enemy had blocked the only exit from the above three cities that is under Ukrainian government control.  He called this the road to life for tens of thousands of Ukrainian citizens.

The passengers of the three trains have been moved into the Barvinkove Station until the shelling stops and the railway staff are able to assess the situation.

Sloviansk and neighbouring Kramatorsk were the first cities in eastern Ukraine to be invaded by ‘former’ Russian FSB officer Igor Girkin and highly trained and Russian-armed fighters in April 2014.  Although the official narrative from Moscow was, and remains, that this was an uprising by local residents against the new government in Kyiv, Girkin himself has admitted that the men came from occupied Crimea (where Girkin helped Russia seize control) via Russia.  He and other Russians involved in the creation of the so-called ‘Donetsk people’s republic’ have admitted that it was they and “Russian forces” that were behind this illegal armed formation.  The cities were under Russian and Russian-controlled militant occupation until early July that year.

The Ukrainian authorities have been advising the elderly, women and children to leave government-controlled parts of the Donetsk and Luhansk oblasts (Donbas) “while they still can”.  The airstrike is therefore a blow for such evacuation efforts and raises fears that Russia may use the same brutal tactics it has been applying against the major port city of Mariupol for well over a month.

There are as many as 130 thousand civilians still trapped in Mariupol, with Russian blocking their evacuation in any serious numbers.  The Mayor of Mariupol, Vadym Boichenko has said that he believes Russia is trying to prevent the International Committee of the Red Cross and other international bodies from seeing and recording what the invaders have done to the city.  There is also considerable evidence that Russia is forcibly taking residents from the side of Mariupol that is currently under their control to Russia or occupied Donetsk.

Oleh Siniehubov, Governor of the Kharkiv oblast, has given a shocking account of how the Russians are preventing Ukrainians from fleeing the towns in the Kharkiv oblast currently besieged or under Russian occupation.   He spoke of ‘filtration corridors’ which the Russians are using to create a crisis in occupied towns.  These are left without electricity, transport, mobile communications, etc., while the Russians refuse to agree safe corridors for evacuation.

The authorities’ attempt to get humanitarian aid via an evacuation corridor in the direction of Vovchansk ended with the convoy, which was led by an ambulance carrying emergency medical assistance, being stopped at the first Russian checkpoint.  The Russians ‘confiscated’ (simply stole) all of the humanitarian aid and held those bringing it hostage for over 24 hours.  They were finally released, but without the vehicles and forced to walk back for over 10 kilometres.

The authorities have also asked for safe corridors to evacuate people from Lyptsi, with the invaders refusing, saying that the residents can only leave for Russia.

The Governor stresses that not one community has been forgotten and they are making every effort to get humanitarian aid to them, with volunteers risking their lives to bring it to the nearest populated area, even where no safe corridor has been agreed.

It should also be noted that the term ‘agreed’ should be treated with caution, since there have been many occasions, such as in Irpin (Kyiv oblast) where people were shot at and killed, despite apparent agreement on safe passage.

Update  Ukraine’s courageous railway workers have succeeded in getting the three evacuation trains back on course, and reported just before midnight on 7 April that the trains were now moving, and were a safe distance from the epicentre of the airstrike.