‘We were lying in the open air, shells were whistling overhead.’ A resident of Mariupol tells about the evacuation and the situation in the city‘The enemy was just under our windows…’ – Anastasia from Irpin‘I saw fire arrows flying from Kherson...’‘... I sang in the basement to calm my daughter down’‘I survived 21 days with a shard in my body. I was lucky’A resident of Mariupol is telling how she found civilians killed by a sniper‘Back in the day Shoygu and I saved Neftegorsk after an earthquake and now he turns Mariupol into it’‘Mariupol will still be Ukrainian’ – wife of the militaryOksana Stomina: This is medieval cruelty, multiplied by the modern possibilities and sick, maniacal ambitions‘The bodies were lying in the street. Broken. Pieces. Blood...’
• Voices of war

‘I washed and buried my brother riddled with shrapnel, and his bloodied and wounded mother was barely in time for the burial…’ 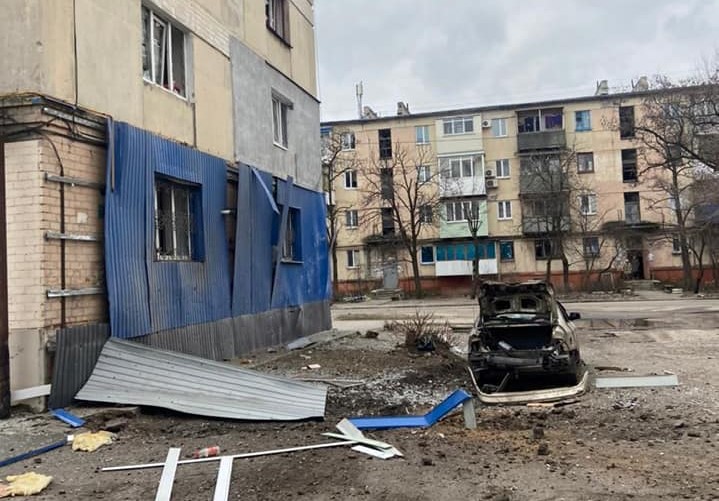 Dnipro has now become a “funnel”, where not the streams, but whole rivers of migrants from the eastern regions of the country flow to. The help for such people is organized well here. The local volunteers have created at least four great centers where they provide help (first of all, distribute the humanitarian aid). Two weeks ago Kyrylo Dolymbayev arrived from Mariupol – an activist and a volunteer well known in Donetsk region, who implemented unbelievable cultural projects in his city. In Dnipro he created a volunteer Hub “Good Morning, We Are From Mariupol!”. And help has fl;own like a river, just like internally displaced people.

With Kyrylo’s permission, we started talking to the settlers, learning and recording their stories, and interviewing them. And we bring to your attention one such, unfortunately, now a typical tragedy of the inhabitants of Luhansk region.

–  Hello, in this volunteer center you have seen that we talked to the people, and approached us. Do you have anything to tell?

– Then introduce yourself and say – do you give consent for publishing of your story, personal data and to enter this information to the data base of human rights defenders who work with recording of the war crimes?

–Of course, I do. I am Olena Yevgenivna Vasilyeva, I was born and lived in Lisichansk. I had mom, grandma, a sister and many relatives – including a cousin in Severodonetsk, Oleg Victorovych.

– We have to add that Lisichansk and Severodonetsk are like one city separated by the river.

– Yes, so we grew up together. Made trips to seas, to summer camps. We were very close. I cannot even call him a cousin. He was married to a Russian woman. It was a good family, but it did not play out. So he lived alone. Not far from him lived his brother Dmytro with his mom, my aunt. They were constantly in touch.  Oleg worked at the AZOT service station in Severodonetsk as a laboratory assistant, then engaged in entrepreneurship. He loved books - in the 90s he and his aunt opened a famous bookstore in Severodonetsk in the Central Market. Enjoyed the authority, earned well.

I married in 2000s, and then divorced and went abroad to my sister – in Dubai, UAE. I lived and worked there.My sister still works successfully and helps us from there. In 2013 my first grandson was born (my other cousin’s grandson), I arrived to look at him, to help look after him. Then 2014 came, the war. Due to nervous tension, I fell ill with cancer (I am still registered). There were terrible weeks. We did not leave the house, people were afraid - we sat in the basement, as now. And then there was the Great Depression.

We were completely peaceful people, never participated anywhere. and were not prepared. My brother is a peaceful person, he was earning his wages, led his own life. When we were dismissed, continued living quietly.

In spring 2014 my grandson was 10 months old, back then he did not learn what is war. But now it got to him when he is 8 years old (Crying). You know, on 5 am on February 24, when there were explosions and the windows trembled in our house in Lisichansk, he ran to me – “Grandma, what was that?”. I said “This is war”. Before that a rumbling was heard in our city for several nights – our guys were bringing troops to the border. People were calming me down, but I said that something terrible was brewing. I remembered that rumbling since 2014 – WAR. I began packing my things.

Then there was hype – on February 24 there were lines to the pharmacy as long as to the Mausoleum. And I got ill with covid, my body temperature rose to 40 degrees. I did not know what to do. I went to the supermarket, but the shelves were empty. I was walking through the aisles and crying.

– You lived in Lisichansk, your brother in Severodonetsk. Did you speak often? What happened in the beginning of Russia’s full-scale invasion?

– He used to call me every Friday or Saturday, we talked on holidays. I used to arrive from Severodonetsk to visit his shop in the market on weekends. Last time I spoke to his phone number was on February 18. After that I haven’t heard anything about him. When he was wounded it was hidden from me.

On March 4, in the evening, my niece Kseniya phoned me and shocked me – Oleg, her dad, died of wounds in the hospital. She confronted me with the fact that he would be brought to us. She said “Olena, be brave, your Olezhko is gone”. 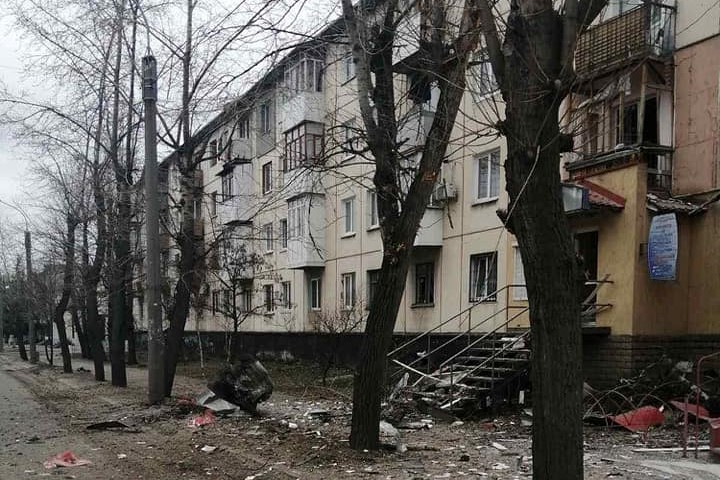 I realized from her story, that a week before his death he was shelled. He dashed from his house when the first shells fell, to reach literally 200 meters from his nine-story building on Kurchatov street, 392 to the next building, where his mother and brother lived. He was worried about them. As soon as he left, a shell hit a building on his side of the street. He died, not knowing that his house is gone, it burned down. He was all riddled.

– I don’t know. But based on the location of the building, the photos and videos of the damage, it is clear that it came from the east, where the troops of the so-called DPR are located.

– Did your brother regain consciousness in hospital?

– Yes, a day before his death. But when he learned that his legs were cut off, he turned for the worse. He became hysterical due to nervous tension. He was proud. But he was doomed – there were no medicines. So they told that we should take him home to die. We were too late.

Oleg died in the evening on March 4. They said, take him or he will be buried in the mass grave. There were too many victims. My aunt thanks God, that we were able to bury him in a black bag (there were no coffins), without the ritual, on the graveyard near our relatives on Voykov. Without a cross, just a mound.

He was brought to me by the soldiers, on some kind of plank, late in the evening of March 4 from Severodonetsk to Lisichansk. I washed him, dressed him up. He was all riddled. he did not have legs, his left arm was soft due to wounds.

– Maybe there are other victims?

– His mother, my aunt, was heavily wounded. She went to us on foot to bury Oleg. From Severodonetsk to Lisichansk. Our soldiers standing on the bridge did not want to let her pass. She was covered in blood.

On March 4, when my brother died, my aunt went to the hospital to take the death certificate (without it the soldiers would not bury him). When she approached the hospital with her son Dima, a shelling started. Dima dropped on the ground, but my aunt was too late, she is 72. ANd a shard shredded her left breast. 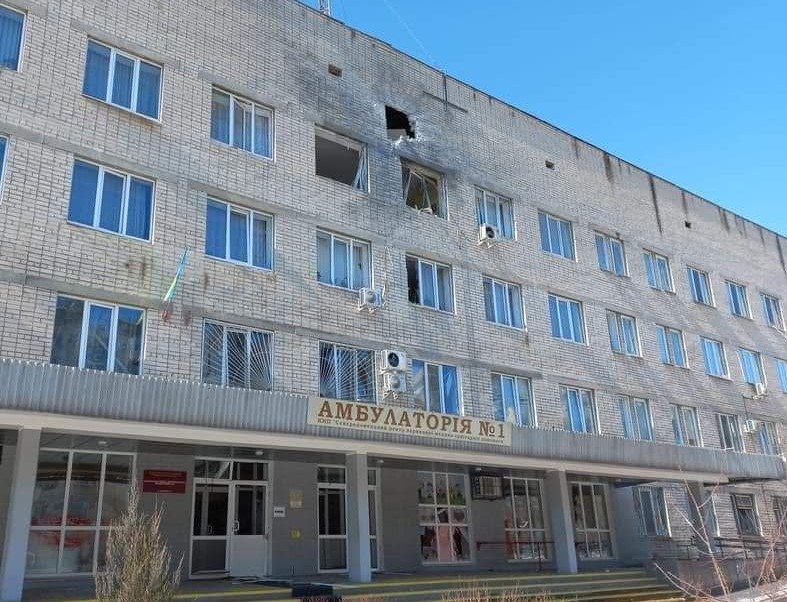 Olena Vasilyeva’s aunt was wounded near this hospital

Her breast was amputated in the hospital at once. But she left at once after the surgery, to bury her son. But the soldiers did not let her pass – they brought her to a shelter, helped her, gave her warm clothes and some food. On the next day they brought her for the burial.

When the soldiers saw this happening on the bridge, they thought, she has lost her mind. all bandaged, bloodied, says: “Let me through, I want to bury my son…”.

But she arrived, she was in time to say goodbye. I wanted her to remain with us – at least, we had water and electricity,but she returned on foot to Severodonetsk, where there was no water, electricity or gas. Then the shelling began. My other relatives fled from the bombing, from Kharkiv to Dnipropetrovsk region. And took me with them – “It’s enough that Oleg is gone…”.

– Were you or your relatives questioned due to that?

– Of course, not. I am a peaceful person, I want peace. But I blocked my close friend from Luhansk in social networks. I cannot speak to her. Disgust and pain. They ruined my life!

– Thank you and please accept my condolences. You did a great job remembering your brother, who was actually killed by war criminals, and your wounded aunt. And we will do everything to ensure that these crimes are formalized and become the basis for a trial of the Kremlin regime, and that all victims are compensated for moral and material damage.