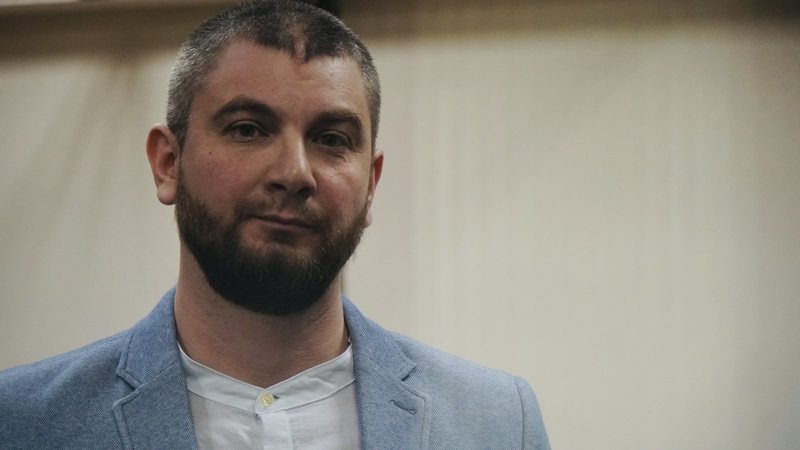 The Southern District Military Court in Rostov (Russia) has rearrested Ernes Ametov, almost two years after the Crimean Tatar civic journalist and Crimean Solidarity photographer was acquitted on identical charges by that same court.  That acquittal was an absolute first in Russia’s persecution of Crimean Tatars and other Ukrainians from occupied Crimea, and there were suspicions from the outset that it was a front, aimed at pretending that the ever-mounting number of such ‘trials’ are not politically-motivated.

The acquittal, on 16 September 2020, came after Ametov, together with the other men, had spent almost two years in detention. The judges -  Rizvan Zubairov (presiding); Roman Saprunov; and Maxim Nikitin were willing to sentence the seven other men, all recognized political prisoners, to terms of imprisonment from 13 to 19.5 years, and have handed down many other identical sentences, so there seemed no grounds for suspecting them of heeding their conscience in Ametov’s case.   Ametov was released in the courtroom and remained at liberty until 12 May 2022.

The other defendants appealed against their sentences, with a record-breaking 45 appeal hearings in all at the Military Court of Appeal in Vlasihka (Moscow region).  Unfortunately, the appeal took so long only because the defendants came prepared, with huge amounts of evidence, demonstrating the flawed nature of the charges and the prosecution’s case.  This was ignored by the court which left all the convictions and sentences almost entirely unchanged.  Prosecutor Yevgeny Kolpikov, who had demanded a 17.5 year sentence against Ametov, had, however, also lodged an appeal against the acquittal. It was this prosecutor’s appeal that the court in Vlasikha allowed on 14 March.  The acquittal was revoked, and ‘the case’ sent back to the same Southern District Military Court.

This new prosecution was registered with the court on 11 April, with the preliminary hearing held on 12 May.  It was at that closed hearing that judge Aleksei Magomadov remanded Ametov in custody.  This is formally for two months, but it is, unfortunately, clear that the detention will then continue being extended.

The fact that Ametov is now again imprisoned, after living peacefully at his home in Crimea since the acquittal, highlights the shocking cynicism of all of these prosecutions.  Without being charged with any recognizable crime, Crimean Tatars are taken prisoner and held in inhuman conditions of detention for two or three years without any conviction.  All of the excuses invariably given by the prosecutor when the defence appeals against such detention can be seen to lack any substance in Ametov’s case, yet he was re-arrested.

The arrests of eight Crimean Tatars on 11 October 2017 and 21 May 2018 marked Russia’s first major offensive against the human rights initiative Crimean Solidarity, and the civic journalists and activists who ensure that the world hears about Russia’s repression in occupied Crimea.  It was the arrest on 21 May 2018 of Crimean Solidarity Coordinator Server Mustafayev (together with Edem Smailov) that provoked the most international condemnation..  In fact, however, Russia had already targeted four civic journalists: Ernes Ametov, Crimean Solidarity photographer; Marlen (Suleiman) Asanov; Timur Ibragimov and Seiran Saliyev, as well as civic activists Memet Belyalov and Server Zekiryaev.  Russia is now also using absolutely identical ‘evidence’ against two other Crimean Tatar activists: Oleh Fedorov and Ernest Ibragimov.

None of the men was accused of any actual crime, only of totally unproven ‘involvement’ in the peaceful, transnational party Hizb ut-Tahrir which is legal in Ukraine. Russia is using ‘terrorism’ charges purely on the basis of a flawed Supreme Court ruling from February 2003 which declared Hizb ut-Tahrir to be ‘terrorist’.  No explanation was provided then, nor has it been since, for why a party that is not known to have committed any acts of terror anywhere in the world should be banned as ‘terrorist’.  Russia has been illegally using these charges against Ukrainian Muslims, most of them Crimean Tatars, since 2015, with the charges now systematically used as a weapon against civic journalists and activists.

Initially, only Marlen Asanov was charged with the more serious ‘organizer’ role under Article 205.5 § 1 of Russia’s criminal code, however in February 2019, the same charge was also brought against Memet Belyalov and Timur Ibragimov. Seiran Saliyev; Ernes Ametov; Server Mustafayev; Edem Smailov and Server Zekiryaev were charged with ‘involvement in such an alleged ‘group’ (Article 205.5 § 2).  All eight men were also charged (under Article 278) with ‘planning to violently seize power’.  This has become a standard part of Russia’s attack on the Crimean Tatar human rights movement and has no basis in fact. The armed searches have never found, nor even looked for weapons, and are only concerned with so-called ‘prohibited religious literature’.

The problem with these conveyor-belt ‘trials’ does not lie only in the flawed charges. No actual proof of involvement in Hizb ut-Tahrir is even required. The charges in all cases were based on illicitly taped conversations in a mosque.  There was not one mention during these conversations of Hizb ut-Tahrir, however the FSB used its own supposed ‘experts’ willing to claim that the subject matter, particular words, etc. gave grounds for concluding that the men were at a ‘conspiratorial meeting’ and were members of Hizb ut-Tahrir .  None of the three ‘experts’ Yulia Fomina; Yelena Khazimulina and Timur Zakhirovich Urazumetov possessed the professional competence to provide such assessments.  In the case of the two ‘linguists’, Fomina and Khazimulina, this was explained in a comprehensive report and then to the court by forensic linguist, Yelena Novozhilova.

This suspect ‘evidence’ was backed by the supposed testimony of two ‘secret’ or anonymous witnesses.  Although the prosecutor is invariably backed by the court in Rostov in maintaining secrecy and blocking any questions that probe the worth of their ‘testimony’, the identity of both men is, in fact, known.  They are Narzulayev Salakhudin, an Uzbek  living in occupied Crimea without the proper documents and Konstantin Tumarevich, a fugitive from justice in his native Latvia.  In both cases, it was clear that the FSB had levers to use to ‘persuade’ the men to cooperate with them, and they are believed to have been used as such anonymous ‘witnesses’ in all cases involving Crimean Tatars from Bakhchysarai.

Seven men, all of whom, except Edem Smailov, are Crimean Solidarity journalists or activists are now serving the following sentences, without any crime:  Marlen Asanov – 19 years; Memet Belyalov – 18 years;  Timur Ibragimov  - 17 years; Server Mustafayev – 14 years; Seiran Saliyev – 15 years; Edem Smailov – 13 years and Server Zekiryaev – 12 years.  In all cases, the sentences are in the worst of Russian penal institutions, and in most, a 1-year or 18-months term of restricted liberty was also imposed (for after the imprisonment).

All of the men have been recognized as political prisoners by the Memorial Human Rights Centre and Amnesty International has also run urgent appeals on behalf of Server Mustafayev whom it has declared an AI prisoner of conscience. The men’s release has been demanded on many occasions by, among others, the US Mission to the OSCE; the US State Department; the EU; Human Rights Watch and Frontline Defenders.  In its statement following the sentences in September 2020, HRW wrote that the verdict “once again, shows just how determined Russian authorities are to make Crimean Tatar activists – and their families – pay the price and how they will subvert the law and courts to do so.”