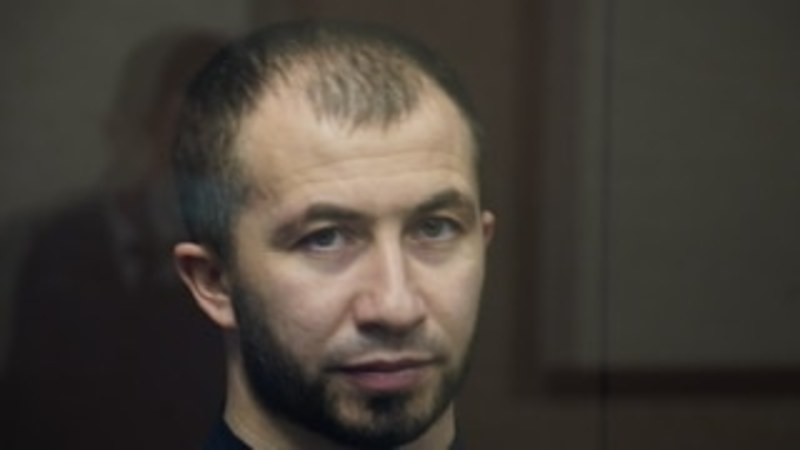 Russian prosecutor Sergei Aidinov has demanded that recognized political prisoner Ismet Ibragimov be sentenced to 20 years in the harshest of Russian prisons, and a massive 500 thousand rouble fine.  All such ‘punishment’ is in connection with charges which have been described as “bordering on fantasy”.  Even if the indictment had been proven, Russia would be seeking to imprison a Ukrainian citizen for two decades for so-called ‘propaganda’ of an organization which is perfectly legal in Ukraine and for ‘anti-constitutional behaviour’, whatever that may be.  In fact, the charges are based on religious literature planted on Ibragimov; on a supposed ‘expert’ assessment by a person whose lack of competence has been detailed by a qualified independent expert,  and on two ‘secret witnesses’ whose claims cannot be verified.

Aidinov asked for this record sentence against a Crimean Tatar civic activist on 19 May at the beginning of the so-called court debate at the Southern District Military Court in Rostov-on-Don (Russia).  Since both he, and the court, knew that there were no legitimate grounds for concealing the identity of the alleged ‘witnesses’ on whose ‘testimony’ the case hinges, it seems safe to conclude that they all understand perfectly well that this is a political trial, and that they are complicit in sentencing a person who has not committed any crime.

Aidinov claimed that the 20-year sentence with the first three in the very worst of conditions, was justified because Ibragimov “is accused of a serious charge of planning to seize power in the Russian Federation and of terrorist activity which poses a big threat for society”.

What Aidinov failed to mention is that Ibragimov is essentially accused only of involvement in the peaceful, transnational Hizb ut-Tahrir Muslim organization which is legal in Ukraine and is not known to have committed acts of terrorism anywhere in the world.  The Russian Supreme Court’s secretive ruling in 2003 that labelled Hizb ut-Tahrir ‘terrorist’ was never adequately explained, and is suspected of having been politically motivated, with Russia thus gaining an excuse for sending members of Hizb ut-Tahrir back to Uzbekistan where they faced religious persecution.

The situation is particularly appalling in occupied Crimea, and not only because Russia is in violation of international law which prohibits it from applying its repressive legislation on illegally occupied Ukrainian territory. Since 2017, Russia has been almost openly using Hizb ut-Tahrir charges as a weapon against Crimean Tatar civic journalists and activists, including Ismet Ibragimov.

Although he is not accused of having committed any recognizable crime, Ibragimov was charged with the more serious Article 205.5 § 1 of Russia’s criminal code, namely ‘organizing the activities of an organization considered in Russia ‘terrorist’, i.e. Hizb ut-Tahrir.  The second charge, of “planning a violent seizure of power and change in Russia’s constitutional order” (Article 278), was earlier in Russia, used selectively, with the renowned Memorial Human Rights Centre believing that this extra charge was punishment against those who refused to ‘cooperate’ with the prosecution.  In occupied Crimea it has now become a standard addition, although not one of the armed searches of defendants’ homes has ever found any weapons, nor are there ever specific details to back accusations of such ‘plans’.

An indictment bordering on sheer fantasy

This was how Ibragimov’s neighbours spoke of the charges against him during a court hearing in January this year. Oleksandr Stepashkin, for example, told the Russian court that he is a practising Christian and had never heard a word of criticism of Christians from Ismet, nor had the latter ever attempted to change his beliefs.

In testifying before the court on 27 January 2022, both Stepashkin and Oleg Seitumerov stated that they had never seen anything to indicate that their neighbour was involved in any offences, nor had they heard calls from him to overthrow the Russian state order. Neither man had seen suspicious people gathering at Ibragimov’s home, and Stepashkin was quite certain that he would have seen such visitations had they actually taken place. During an earlier hearing on 20 January, Denis Zhukov also stated that Ibragimov had never promoted violence and had never suggested any plans to overthrow the regime. Nor had he ever expressed intolerance to other nationalities and faiths and had not spoken in favour of the ‘islamization of the Crimean population’ (as claimed).  On the contrary, he said, Ibragimov was the sort of person he would happily entrust to take his children to and from school or similar.

Ibragimov was one of seven men arrested on 7 July 2020, during FSB armed ‘searches’ of 11 homes in different parts of occupied Crimea.  In many of the cases, including that of Ibragimov’s home, the FSB had brought the religious books they claimed to ‘find’. It is unclear whether the FSB are simply sloppy because they understand that the court will accept anything, or whether it is a deliberate act of disrespect that on many occasions, including in Ibragimov’s case, the books are claimed to have been found near a rubbish area, a toilet or similar, with it quite inconceivable that any devout Muslim would have kept religious books in such a place.

Ibragimov was accused of having organized a ‘cell’ of unidentified members of Hizb ut-Tahrir, of supposed propaganda of party ideology and of attempts to attract new members.   The prosecution also claimed that he promoted the establishment of a worldwide Caliphate, although this is almost certainly aimed at justifying the extra charge of ‘planning violent seizure of power’ and based solely on claims about Hizb ut-Tahrir ideology.

Aside from the planted ‘prohibited literature’, the only ‘evidence’ was from a flawed ‘expert assessment’ and from two so-called ‘secret witnesses’ whose ‘testimony’ was contradictory and who may well have never set eyes on Ibragimov.

In declaring Ismet Ibragimov a political prisoner on 16 June 2021, the renowned Memorial Human Rights Centre pointed out that, despite the charges, there was no mention of any calls to violence in the case against Ibragimov.  Memorial considers that he is being persecuted for peacefully exercising his right to freedom of faith and of association and that he was imprisoned, without any elements of a crime, in order to put an end to his religious activities as well as to his civic activism.

During the next, and probably, last hearing, on 2 June, the defence and Ibragimov will give their final address, with the judges then due to retire to the ‘consulting chamber’ before passing an almost certainly predetermined sentence. .

Ismet Ibragimov recently turned 34.  He has a wife in poor health, three small daughters and elderly parents.  All of that was ignored by Aidinov.  It remembers to be seen whether the judges show similar brutality and pass what will be worst sentence to date against a Crimean Tatar political prisoner.

The letters tell him that he is not forgotten and also send an important message to the prison staff and Moscow that their actions are under scrutiny. Letters need to be in Russian, and on ‘safe’ subjects.  If that is a problem, use the sample letter below (copying it by hand), perhaps adding a picture or photo. Do add a return address so that he can answer.