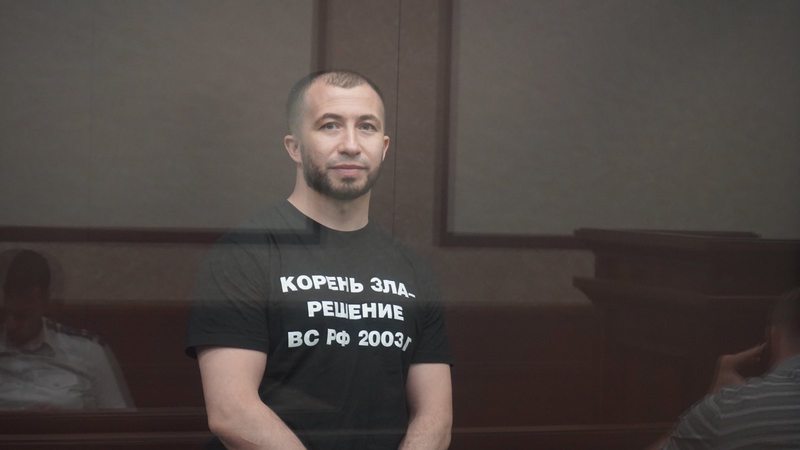 Three ‘judges’ from the notorious Southern District Military Court in Rostov (Russia) have sentenced 34-year-old Ismet Ibragimov to 19 years’ imprisonment without any crime and on charges that Ismet’s neighbours say “border on fantasy”.

The sentence passed down on 8 July against the Crimean Tatar father of three small daughters stipulates that the first five years are to be in a prison, the very worst of all Russian penal institutions, with the remainder in a harsh regime prison colony.  Presiding judge Denis Galkin, together with Viacheslav Korsakov and Vladimir Tsybulnik, added a further two years of severely restricted liberty after this monstrous sentence, which was just one year less than that demanded by prosecutor Sergei Aidinov.

There is simply no possibility that the prosecutor and judges seriously believed that they were involved in prosecuting a ‘terrorist’.  Ismet Ibragimov was not accused of any recognizable crime.  He was not, in fact, accused of a crime at all since the charges against him pertained merely to unproven involvement in an organization which is legal in Ukraine.  Had there genuinely been some good reason in February 2003 for Russia to become the only country in the world to label the peaceful transnational Muslim organization Hizb ut-Tahrir ‘terrorist’, Russia’s  Supreme Court would not have kept the ruling secret until it could no longer be challenged.

There are serious concerns about the use of ‘Hizb ut-Tahrir prosecutions’ even in Russia, however the situation is especially shocking in occupied Crimea.  Russia is in violation of international law by applying its legislation on illegally occupied Ukrainian territory and is increasingly using such charges as a method for trying to terrorize Crimean Tatars in general, and to silence those involved in human rights initiatives, like Crimean Solidarity.

It is possible that Moscow has particular quotas for persecution of Crimean Tatar activists and journalists, as well as other Ukrainians with a pronounced civic position.  What seems certain is that the FSB have their own reasons for staging Hizb ut-Tahrir  prosecutions.  Put most brutally, they allow the FSB to improve their ‘statistics’ on ‘fighting terrorism’ with virtually no effort, and are known to bring individual FSB officers bonuses or even promotion.

Ismet Ibragimov was one of seven men arrested on 7 July 2020, during FSB armed ‘searches’ of 11 homes in different parts of occupied Crimea.  In many of the cases, including that of Ibragimov’s home, the FSB had brought the religious books they claimed to ‘find’.

Since Ibragimov was not prosecuted as part of a group, the FSB designated him ‘an organizer’ of a Hizb ut-Tahrir group, under the more serious Article 205.5 § 1 of Russia’s criminal code.  He was also charged with ‘planning a violent seizure of power and change in Russia’s constitutional order” (Article 278). It was claimed that he had organized a ‘cell’ of unidentified members of Hizb ut-Tahrir, had engaged in supposed propaganda of Hizb ut-Tahrir ideology and had attempted to attract new members.   The prosecution also asserted that he promoted the establishment of a worldwide Caliphate, although this was almost certainly aimed at justifying the extra charge of ‘planning violent seizure of power’ and based solely on claims about Hizb ut-Tahrir ideology.

Aside from the planted ‘prohibited literature’, the only ‘evidence’ was from a flawed ‘expert assessment’ and from two so-called ‘secret witnesses’ whose ‘testimony’ was contradictory and who may well have never set eyes on Ibragimov.

Unlike these anonymous individuals, Ismet Ibragimov’s neighbours were quite prepared to appear openly as witnesses for the defence. They said that the charges bordered on sheer fantasy.  One of the men, Oleksandr Stepashkin, told the Russian court that he is a practising Christian and had never heard a word of criticism of Christians from Ismet, nor had the latter ever attempted to change his beliefs.

In testifying before the court on 27 January 2022, both Stepashkin and Oleg Seitumerov stated that they had never seen anything to indicate that their neighbour was involved in any offences, nor had they heard calls from him to overthrow the Russian state order. Neither men had seen suspicious people gathering at Ibragimov’s home, and Stepashkin was quite certain that he would have seen such visitations had they actually taken place. During an earlier hearing on 20 January, Denis Zhukov also stated that Ibragimov had never promoted violence and had never suggested any plans to overthrow the regime. Nor had he ever expressed intolerance to other nationalities and faiths and had not spoken in favour of the ‘islamization of the Crimean population’ (as claimed).  On the contrary, he said, Ibragimov was the sort of person he would happily entrust to take his children to and from school or similar.

In declaring Ismet Ibragimov a political prisoner on 16 June 2021, the authoritative Memorial Human Rights Centre pointed out that, despite the charges, there was no mention of any calls to violence in the case against Ibragimov.  Memorial considers that he is being persecuted for peacefully exercising his right to freedom of faith and of association and that he was imprisoned, without any elements of a crime, in order to put an end to his religious activities as well as to his civic activism.

The sentence will certainly be appealed, and until then, Ibragimov is likely to remain imprisoned in a SIZO [remand prison] in Rostov.

The letters tell him that he is not forgotten and also send an important message to the prison staff and Moscow that their actions are under scrutiny. Letters need to be handwritten in Russian, and on ‘safe’ subjects.  If that is a problem, copy the sample letter below, perhaps adding a picture or photo. Do add a return address so that he can answer.