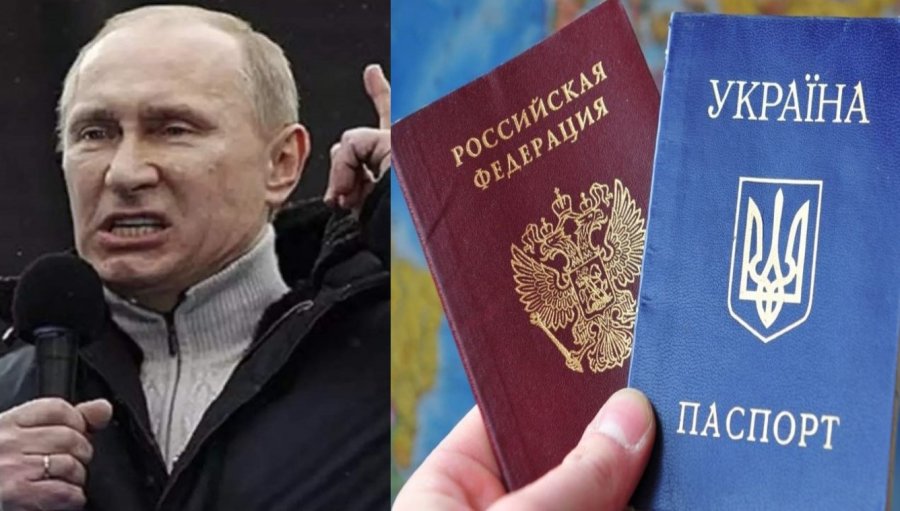 Russian leader Vladimir Putin has signed a decree envisaging simplified procedure for Russian citizenship in the case of residents of the Zaporizhzhia and Kherson oblasts.  This is still further confirmation, should any more have been required, that Putin was lying when he claimed that Russia was not seeking to annex still further parts of Ukrainian territory.  The 25 May decree coincided with news from Petro Andriushchenko, Advisor to the Mayor of Mariupol, that the Russian proxy ‘Donetsk people’s republic’ had begun directly issuing Russian passports without going through the pretence of receiving the ‘citizenship’ of this illegal puppet formation.

The ‘new’ decree, in fact, merely supplements Putin’s original decree weaponizing citizenship from 24 April 2019.  This was issued three days after Ukrainians overwhelmingly voted for Volodymyr Zelensky as Ukraine’s President, and was seen by many as a direct threat to the new President of what he could end up with if he was not prepared to make concessions to Russia.  At the time, Novaya Gazeta correspondent Pavel Kanygin noted that the constant rumours and talk previously about issuing passports in Donbas had been accompanied by comments about how such a policy had been successfully carried out in South Ossetia and Abkhazia.  “That is, Moscow is making the threat clear that the handing out of citizenship is at very least a step towards recognizing the territory.  If you don’t want to take back “the republics” on our conditions …, then get millions of Russian citizens throughout your country”.

Putin issued a second decree on 17 July 2019, this time making it possible for all Ukrainians in the Donetsk and Luhansk oblasts (Donbas) to receive Russian citizenship according to ‘simplified procedure’, even if they live on Ukrainian government controlled territory.  Both moves were condemned by the international community, with the EU, for example, calling Russia’s actions “an encroachment on Ukraine’s sovereignty” and in breach of the Minsk Agreement. On 10 October 2019, the EU stated that it did not recognize Russian passports issued in occupied Donbas, and that they were issuing guidelines to member states on how to recognize such documents and not recognize them.

Moscow has demonstrated, as it does, total contempt for such EU protests.  In January 2022, with Russia’s total invasion of Ukraine already planned, Putin tabled a new draft law on Russian citizenship which envisaged the so-called ‘change of the state border of the Russian Federation’ as grounds for obtaining Russian citizenship.

Where the original decree from 24 April 2019 reads “on the territory” of the Russian proxy ‘Donetsk and Luhansk people’s republics’ [D-LPR], the new decree adds “the Zaporizhzhia oblast of Ukraine or the Kherson oblast of Ukraine”.  The fact that the oblasts are identified as parts of Ukraine does not in any way minimize the hostile nature of this action, nor the overt weaponization of Russian citizenship.  Although the Russian invaders have met with resistance throughout parts of the Zaporizhzhia and Kherson oblasts and Donbas that they are temporarily occupying, it has long been clear that Russia has no intention of voluntarily giving up any territory under armed occupation.

On 6 May, Andrei Turchak, a top official in the ruling United Russia party, openly claimed that Russia had “come to the Kherson oblast for good”.  He also asserted that the residents of the oblast would themselves determine the oblast’s status. This, however, was after Russian soldiers had used violence and abductions to terrorize the local population which has consistently demonstrated against the invasion and after it had forcibly installed collaborators in the place of democratically elected leaders, as well as cutting off Ukrainian channels and replacing them with Russian propaganda.  On 11 May, Russia’s state-controlled RIA Novosti published a headline, claiming that ‘The Kherson regional authorities will ask Putin to include their region into Russia’.  By these ‘authorities’, the Russian propaganda channel meant Kyrylo Stremousov, the local collaborator whom the Russian military had labelled ‘deputy head of the regional military-civic administration’.

It had long been feared that Russia would resort to military means to obtain water for occupied Crimea, and at least one of the first aims of the invading Russian army on 24 February was to seize the Kakhovka Hydroelectric Station and to ensure access to water from the Dnipro river.  Russia’s all-out war against Ukraine, and the measures underway in occupied parts of the Zaporizhzhia and Kherson oblasts to foist Russian currency, media and educational standards make it clear that the appetite for annexing Ukrainian territory is considerably greater.

Ukraine’s Foreign Ministry has condemned Putin’s move and warned that it opens the way for Russia to force residents of Ukrainian territory under Russian military occupation to receive Russian citizenship.  This is, they stress, “a flagrant violation of Ukraine’s sovereignty and territorial integrity”.  Foreign Minister Dmytro Kuleba “has called on the international community to stop Russia which is committing crimes against Ukraine and Ukrainians on a scale not seen in Ukraine since the Second World War.”