After destroying Mariupol, Russia offers its victims money but only if they agree to blame Ukraine Russian FSB produce ‘refugee’ propaganda video blaming Ukrainian soldiers for Russia"s war crimes in Mariupol Russia continues bombing Mariupol while producing propaganda videos about its ‘humanitarian aid’Russia responds to International Court order to stop bombing Ukraine by destroying Mariupol Theatre sheltering familiesRussian invaders take Mariupol intensive care hospital and its patients hostage Mass graves of the Ukrainian civilians Russia claims it is not killingTerror and abductions as Russia tries to break Ukrainian resistance in Kherson and other occupied citiesUkrainian journalist Oleh Baturin feared abducted by Russian invaders in Kherson oblast Mayor of Melitopol Ivan Fedorov abducted after refusing to collaborate with the Russian invaders Russian priest arrested and prosecuted for sermon opposing Russia’s war against Ukraine Russia effectively admits it deliberately bombed the maternity hospital in Mariupol that killed three patients, including a childRussia brings grotesque propaganda to Berdiansk after Ukrainian journalists refuse to collaborate Russian invaders murder Ukrainian volunteers Impassioned appeal from Ukrainian Muslim leader in face of Russia’s war to destroy Ukraine Russia is forcing Ukrainians from occupied Crimea and Donbas to fight in its invasion of Ukraine Children among the dead after Russian invaders opened fire on fleeing civilians Russia installs its propaganda TV after seizing Kherson and imposes 15-year sentences for reporting its invasion of UkraineUkrainian survivors of the Holocaust demand Putin and Russia get out of Ukraine Russia continues its carnage, flouting binding order from ECHR to stop bombing civilians in UkraineBabyn Yar bombed by Russia, 80 years after Nazi Massacre of Ukrainian Jews
• Topics / War crimes

The Mariupol authorities have reposted a harrowing photo from the publication Mariupol Today which appears to show the premises of a supermarket being used as a dumping ground for the bodies of Mariupol residents.  According to Petro Andriushchenko, Advisor to the Mayor of Mariupol, these are bodies either washed out of graves by the unsuccessful attempt to restore water supplies to the city which Russia has destroyed, or exhumed.  The Russians are bringing bodies to the supermarket on the left bank of the city and simply dumping them there, “as though rubbish”.  He says that there is a catastrophic shortage of people to bury bodies, and even the improvised morgues cannot cope with the numbers.  The photo, he says, is new, and provides graphic demonstration of the inhumanity (of the invaders) and of the threat of epidemics in the city. 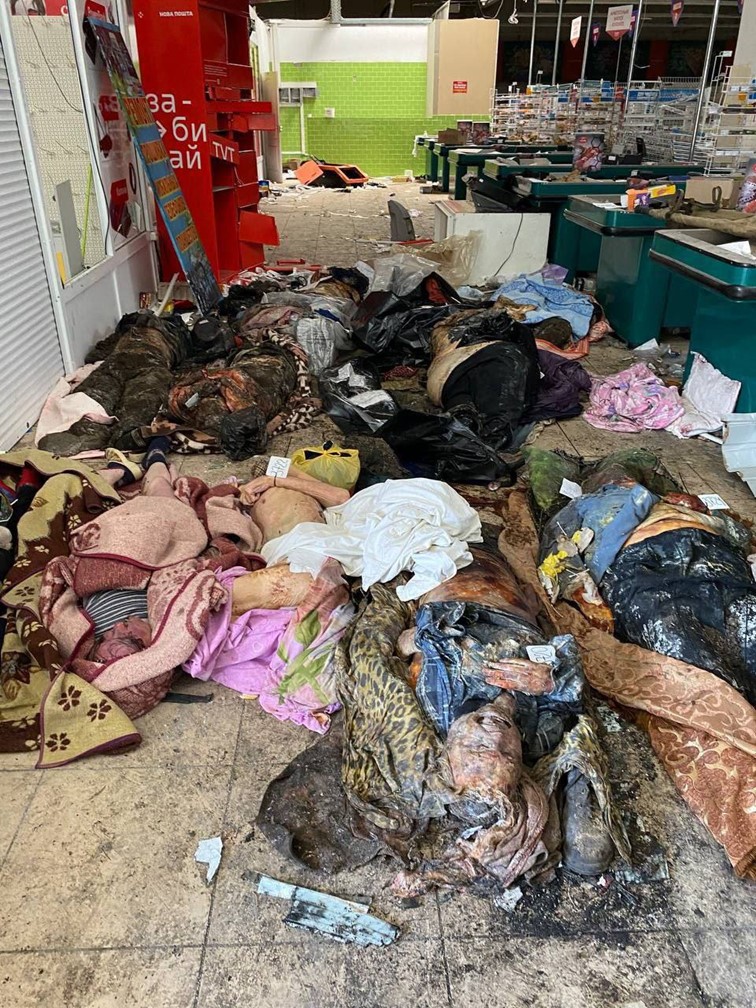 Russia began besieging Mariupol within days of its full-scale invasion of Ukraine.  Its relentless bombing and shelling of civilian targets meant that around 90% of the city’s infrastructure was destroyed, while the Russian military also prevented evacuation of civilians to other cities in Ukraine.  The remaining population of the city were left without electricity, heating or running water, and food, fresh water and medicines were also in very short supply.  The daughter of 91-year-old Holocaust survivor,  Vanda Obiedkova described how her mother died in a cold basement, pleading for water, which her daughter and son-in-law risked their lives trying to obtain as there was a Russian sniper positioned by the nearest well.

The figure of 22 thousand Mariupol victims killed since the beginning of Russia’s total invasion is likely to be a serious underestimate, however Russia is now doing everything to prevent the real number of its victims from being discovered.  The city authorities began warning that the Russians were using mobile crematoria and collection points for the bodies of victims in early April, with the first reports coinciding with the shocking discoveries of atrocities committed by the Russian invaders in Bucha and other cities in Kyiv oblast.  The invaders have also been forcibly deporting Mariupol residents to occupied Donbas and to parts of Russia, with this also, perhaps deliberately, making it harder to assess the real numbers of deaths in the city.

Given the scale of the destruction, there is little chance of real improvement in the humanitarian situation, and Andriushchenko  is doubtless right in warning of a real danger of epidemics in the city.

Russia appears to have concentrated its efforts on propaganda.  From back in March, there were Russian propagandists travelling around occupied parts of Mariupol, producing videos aimed at associating Russians, not with the real airstrikes, shelling and destruction, but with ‘humanitarian aid’.  There is evidence that the Russian FSB [security service] has been involved in forcing those residents taken to Russia to produce propaganda videos, claiming that Russian atrocities, like the bombing of a maternity hospital on 9 March, were carried out by Ukrainian soldiers.

On 26 May, Andriushchenko reported that the occupation regime had set about “improving the life of Mariupol residents”.  Not in any real sense, of course.  Instead, they have purchased three propaganda vehicles as well as 12 huge television screens which they are placing in areas where people gather (where humanitarian aid is handed out, where papers are organized, as well as access to water).  “Propaganda crap about improved life” is played over and over again.

As well as mobile crematoria, the Russian invaders are also digging mass graves on the outskirts of Mariupol.  On 21 April, the first satellite images were released by Maxar Technologies.  These appeared to show a mass grave, with the site in question having begun expanding between 19 and 23 March, and become significantly larger by 30 March.  The Ukrainian investigative project Skhemy reported then that the area of new graves, near the existing cemetery at Manhush, was at least 300 metres in length. The Mariupol City Council estimated, by making a comparison with the area of a mass grave found after the Russians retreated in Bucha, that the fresh graves could contain the bodies of between three and nine thousand Mariupol residents.

These were the first of four such mass graves identified by satellite images.  On 22 April, a second likely mass grave identified by satellite images was reported, in the village of Vinohradne.  A third site was detected near Stary Krym on 25 April, with the Mariupol City Council stating that the invaders “are again trying to hide the scale of the genocide in Mariupol.”  If one believes the signs that the Russians have themselves erected, one sector alone contains 268 graves.  The fourth such grave was reported in the middle of May.

While the use of mobile crematoria almost certainly indicates the wish to hide the evidence of Russian crimes, mass graves may well be required given the total destruction of infrastructure in the city and the sheer number of victims.  That, however, has not stopped the Russian invaders from seriously increasing the danger of a major epidemic through one of their most foul propaganda efforts.  As reported, people were offered amounts of compensation for the death of family members and loss of property on condition that they signed ‘testimony’ claiming falsely that Mariupol had been destroyed by Ukrainian soldiers.  Andriushchenko also reported around this time that the invaders were demanding that people receive a certificate from them to confirm the death of relatives.  In order to receive this ‘certificate’, they needed to present the body of the person who had died.

This was appallingly irresponsible, and also highly cynical. According to Andriushchenko , the Russians are now demanding that people provide original documents to prove ownership of the properties which Russia has been razing to the ground.  With such demands, it seems clear that Russia has tricked people, driven by desperation, into signing lies about the Ukrainian Army, without any chance of compensation from the real perpetrators.

On 30 May, the Mariupol City Council reported that 25 new sectors have appeared at the Starokrymske Cemetery, with bodies laid on several layers, although ‘masked’ by signs suggesting that they hold individual graves.  The city authorities believe that since the middle of April, the Russian invaders have buried at least 16 thousand Mariupol residents in mass graves near Stary Krym, Manhush and Vynohradne.  Approximately five thousand people were also buried by the municipal authorities up till the middle of March.  Thousands of bodies remain in the graves families or neighbours were forced to dig, under the rubble of bombed buildings and in morgues.

The Mayor of Mariupol, Vadym Boichenko says that the new facts coming to light suggest that the real number of deaths is likely to be much worse than the initial figure of 22 thousand and calls on the international community to pay heed to this and to the appalling situation of the local population under Russian occupation.