Life sentence in Ukraine’s first war crimes trial since Russia’s total invasion but questions remain Ukrainian sportsman tortured to death by Russian invadersRussia continues its carnage, flouting binding order from ECHR to stop bombing civilians in UkraineBabyn Yar bombed by Russia, 80 years after Nazi Massacre of Ukrainian Jews Russia proposes 15-year sentences and threatens "treason charges" for telling the truth about its war crimes in UkraineRussian schoolchildren told that Russia is bombing and killing Ukrainian children in ‘self-defence’ Putin miscalculated. Russia is fighting “an army of 40 million Ukrainians” Chief Rabbi of Ukraine demolishes Putin’s excuse for Russia’s invasion Russia bombs a Ukrainian kindergarten and apartments in its war against independent Ukraine Putin will continue attacking until Russia is stopped. Help Ukraine defend its freedom today!Russian Rule of Lawlessness in Occupied Crimea and DonbasUkrainian poet and writer Volodymyr Vakulenko killed after being seized by Russian invaders Russian torture was particularly savage in Kherson oblast, with even teenagers imprisoned Russian FSB officer charged over unlawful detention and torture of Ukrainian journalist Vladyslav Yesypenko Three life sentences and confirmation that Russia should be on trial for the shooting down of MH17 63 bodies of Ukrainians tortured by Russians already found in liberated Kherson oblast UN demands Russia pays Ukraine reparations as probe into Kherson war crimes begins Russia destroys or damages over 1100 Ukrainian hospitals and plunders othersRussia’s use of ‘evacuated’ Kherson residents as human shields is a war crime Ukraine’s penitentiary institutions and the war
• Topics / War crimes 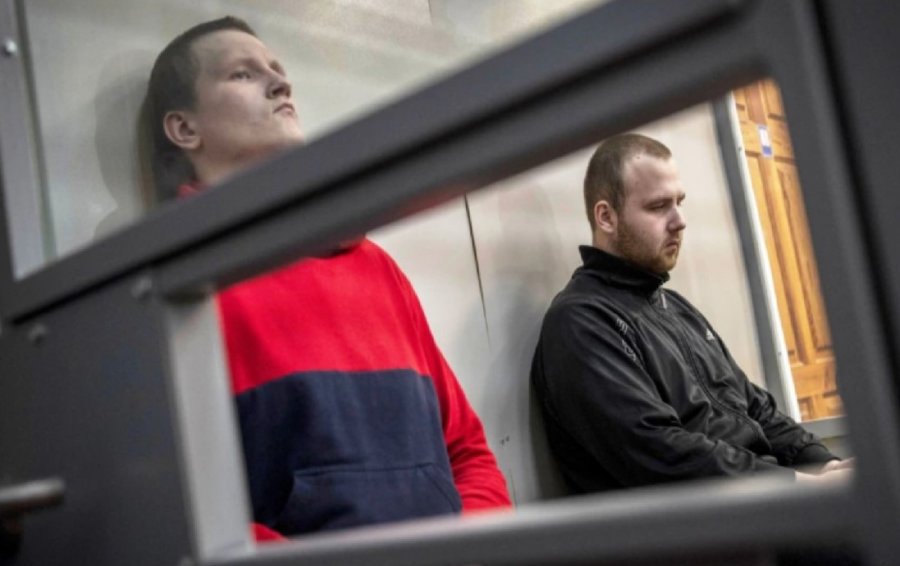 In the second sentence for war crimes since Russia began its total invasion of Ukraine, two young Russian contract soldiers have received 11.5 year sentences for bombing civilian areas in the Kharkiv oblast.

Alexander Bobikin and Alexander Ivanov of involvement in firing Grad missiles at civilian targets on 24 February, first from the Belgorod oblast in Russia, and then, a second time, from Ukrainian territory.  Bobikin was responsible for loading the Grad missile launcher, Ivanov – for directing the fire.   Both men admitted the charges, with Ivanov expressing repentance and asking that the court not impose the maximum sentence.  This plea was reiterated by their lawyer, who mentioned both that the men showed repentance and that they had been obeying orders.   The maximum in this case was 12 years, which the prosecutor had asked for, with the Kotelevsky District Court in the Poltava oblast imposing almost that sentence in both cases on 31 May.  In handing down the sentences, the court decided that the men could have refused to obey the order to open fire. Ivanov had, in fact, admitted to the court that some of their colleagues had refused.  The men had also been aware that they were using missiles which are notoriously inaccurate and which could hit civilian targets.

Both men were serving in the Murmansk oblast, but in December 2021 were sent to Belarus, supposedly for training, and then, in February 2022, to Kursk (in Russia), also purportedly for training.  In the second half of February, however, they were moved to the Belgorod oblast, bordering with Ukraine and learned from their command about the war.  The prosecution has not established the identity of those who issued the order to fire the Grad missiles.

The Russians’ unit was successfully destroyed by the Ukrainian Armed Forces.  Both Bobikin and Ivanov hid for a while and then gave themselves up.  Like Vadim Shishimarin, the 21-year-old Russian soldier sentenced to life imprisonment on 24 May for killing a civilian, Bobikin and Ivanov are prisoners of war.  This means that they cannot be prosecuted for taking part in the war, but there are no such restrictions where war crimes are concerned, and these include bombing civilian targets.

The case is particularly important as Russia has claimed from the outset that it is only hitting military targets.  Most incredibly, it is still continuing to do so, despite carrying out horrific bombing that has all but destroyed Mariupol and is now destroying other whole cities in the Donbas.

Within a day of Russia’s total invasion, the International Criminal Court [ICC] Prosecutor Karim Khan had  that the Court was closely following developments in Ukraine and that it might investigate possible war crimes.  Within days of Khan suggesting that ICC member states would expedite proceedings by asking for an investigation, 42 countries had lodged such applications. .  Within days, 42 member states had lodged such applications.  On 25 April, the Office of the ICC Prosecutor  that it would participate, for the first time ever, in a joint investigation team on alleged core international crimes committed in Ukraine, initially set up on 25 March.  On 31 May, that Estonia, Latvia and Slovakia are joining the original three countries - Lithuania, Poland and Ukraine – on the Joint Investigation Team.  During the same press conference, the ICC prosecutor said that he is planning to open an office in Kyiv and said that the teamwork “shows that there is this common front of legality that is absolutely essential, not just for Ukraine … but for the continuation of peace and security all over the world,”