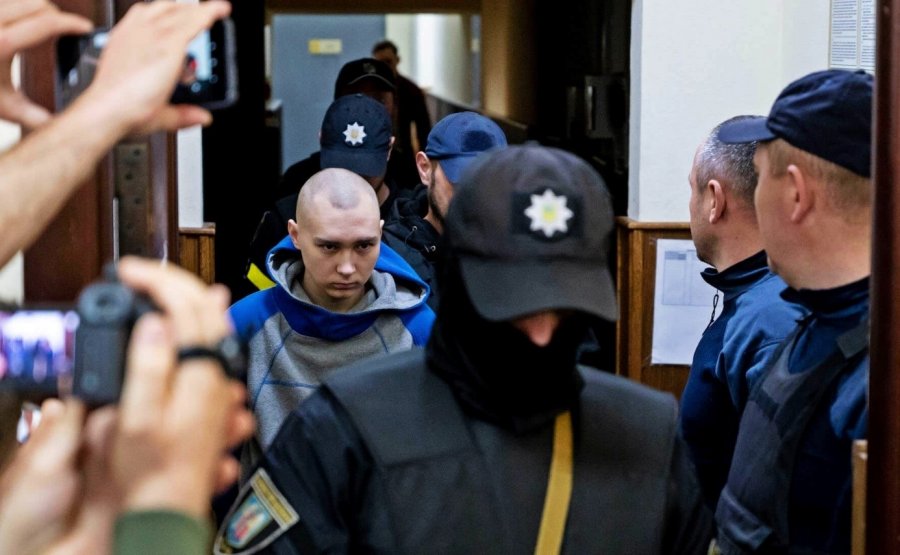 A court in Kyiv has sentenced Russian soldier Vadim Shishimarin to life imprisonment on war crimes charges for killing a civilian in cold blood shortly after Russia began its total invasion of Ukraine.  Shishmarin admitted the crime, and there seems no reason to doubt his guilt, however the trial has left questions unanswered, not least why only one of the four surviving Russians captured was put on trial.

Shishimarin was the commander of a unit of the fourth Kantemirovskaya tank division from Moscow region. He was among the Russian forces who invaded the Sumy oblast on 24 February.  On 27-28 February, the Ukrainian Armed Forces succeeded in destroying the column of Russian tanks and other military vehicles that he was travelling in.  Shishimarin and four other Russians (Senior Lieutenant Alexander Kalinin;  Nikolai Makeyev; Ivan Maltisov and I.V. Kufakov) were not from the same military unit, but joined together following the destruction of the column.  Initially on foot, they then opened fire on a civilian car.  The driver managed to escape, but the Russians stole his car and moved in the direction of the village of Chupakhivka.

It was in Chupakhivka that the invaders saw 62-year-old Oleksandr Shelipov who was in civilian clothes and speaking on the telephone.  According to the prosecution, it was Kufakov who ‘ordered’ Shishimarin to kill the 62-year-old civilian, claiming that he could pass on details to the Ukrainian Army about their location. Shishimarin shot and killed the Ukrainian, hitting him 3-4 times in the head.

The five then continued further, and, having threatened another driver, seized the latter’s car.  They were, however, ambushed by local residents, with Kufakov killed in the gunfire  The others fled to a local pig farm and then, on 1 March, surrendered to local residents, who handed them over to the Ukrainian Armed Forces.

All four accordingly became prisoners of war.  In accordance with international law, they must not be tried, however this prohibition does not apply where war crimes, including the killing in cold blood of civilians or criminal orders to this effect, are concerned.

Only Shishimarin was put on trial, although he and Maltisov both testified that Makeyev and then Kufakov had issued the criminal ‘orders’ to kill a civilian.

Prosecutor Andriy Syniuk read out the indictment at the Solomiansky Court in Kyiv on 18 May.  Shishimarin was charged under Article 438 of Ukraine’s Criminal Code (violation of the laws and customs of war).  This rather woolly provision is, unfortunately, the only possible charge since Ukrainian President Volodymyr Zelensky never signed into law the bill enabling liability for war crimes which was finally adopted by Ukraine’s legislators on 20 May 2021 after years of stalling (details here).

Article 438 has resulted in only four sentences to date, with only one not issued in absentia.  The trial of Shishimarin was the first trial since Russia’s full-scale invasion, and also a first given the speed with which it was brought to court.  There were also only three hearings, before Judge Serhiy Ahafonov sentenced the Russian to life imprisonment, but this was mainly because Shishimarin had admitted killing the civilian, with the only ‘defence’ offered being that he had been obeying orders.  The victim’s widow, Kateryna Shelipova, who had been hiding in the cellar, but came out when she heard shots near the house, also testified in court that she had seen the defendant with his machine gun.

Pani Kateryna told the court that she believed Shishimarin should receive a life sentence, but added: “However if he is exchanged for the defenders of Mariupol, our heroic lads from Azovstal, I will be in favour.”

A neighbour also confirmed that the shots that killed Shelipov came from the stolen car the Russians were in. Ihor Deikun also undermined the defence’s claim that the Russians believed that the victim could video or photograph them and pass information about their whereabouts to the Ukrainian Armed Forces.  The phone, lying by the man they had killed, was clearly an old-fashioned mobile, not a smartphone.

Maltisov, who is also in custody, gave testimony as a witness.  He confirmed that he was in the car with Shishimarin and saw him kill the unarmed civilian.  He said that Kufakov was an intelligence officer, aged from 25-30.  Although he claimed that a person of that age in Russia can be at least a lieutenant, possibly a senior lieutenant, neither he, nor any of the other men had set eyes on him before.  This clearly raises the question why Shishimarin, or any of the men, should have considered that he was entitled to issue ‘orders’.

In fact, according to both Shishimarin and Matlisov, the first order to shoot Shelipov came from Nikolai Makeyev.  According to Maltisov, Shishimarin had refused, saying that he did not want to shoot a civilian. It was, supposedly, at this point that Kufakov reiterated the ‘order’, “in an imperative tone”, after which Shishimarin fired the shots.

Kufakov later began driving the car which was the reason that he was killed in the ambush.  He was, it should be noted, still alive when the four other Russians decided to save their own skins and fled.

Matlisov had only served in the army for three months, and, as he indicated in court, simply assumed that if somebody was senior in rank, you obey them, whether or not they are your commanding officer.  He did, however, know that you should not obey criminal orders, with these including killing a civilian.

Shishimarin himself simply said that he did not shoot when ordered to by Makeyev.  Asked why, in that case, he had obeyed Kufakov, he said that the latter had spoken more roughly, threateningly.  He expressed regret and repentance for what he had done.

As for the questions, the first, and most burning, is surely why Shishimarin was placed on trial, but not Makeyev, who also issued the criminal order to kill a civilian.

Instead Makeyev and Kalinin were exchanged for Ukrainian prisoners of war back in April.

This is not the first time that Ukraine has exchanged people accused of the gravest of crimes.  In September 2019, Russia agreed to release 35 Ukrainian political prisoners, including Oleh Sentsov, in exchange (mainly) for MH17 witness, possibly suspect, Volodymyr Tsemakh.  Since the latter is Ukrainian, the fact that Russia was prepared to hand over so many Ukrainians to get him out of the clutches of the Ukrainian and Dutch prosecutors mainly incriminated Russia itself, but it was still a controversial move for Ukraine.  At least as controversial was the release of five former Berkut officers accused of mass murder on Maidan and three men, convicted by a first court of a terrorist attack in Kharkiv that killed several people, including a child in exchange for hostages and POWs held by Russia’s proxy Donetsk and Luhansk ‘republics’ in December 2019.

Kateryna Shelipova has herself said that she would be in favour of Shishimarin being part of an exchange if it could return heroic Ukrainian defenders.  It is, nonetheless, important that due procedure is first followed, including court trials.  In this case, only Shishimarin has answered for the crime he committed, not Makeyev.  Ukrainian human rights lawyer, Volodymyr Yavorsky, has also suggested that the five men were essentially all accomplices in the same crimes. He is also sceptical about the classification of the crime and points out that the Russians did not kill other civilians, which possibly lends credence to their claim that the argument was that Shelipov could be revealing their location.  This does not alter the fact that Shishimarin killed him in cold blood, but it is still important that Ukraine tries all Russians accused of grave crimes under the relevant provisions of the law.

This is especially important given the clear indications that Russia and its puppets in the so-called ‘Donetsk and Luhansk people’s republics’ are planning to stage show ‘trials’ of Ukrainian defenders in their custody, including those from Azovstal in Mariupol.  Russia has already produced propaganda videos, with Ukrainians almost certainly either tortured or threatened into claiming on video that crimes, like Russia’s bombing of a maternity hospital in Mariupol, were committed by Ukrainian soldiers.  It seems more than likely that they will use similar methods to obtain ‘testimony’ against prisoners of war in their custody.