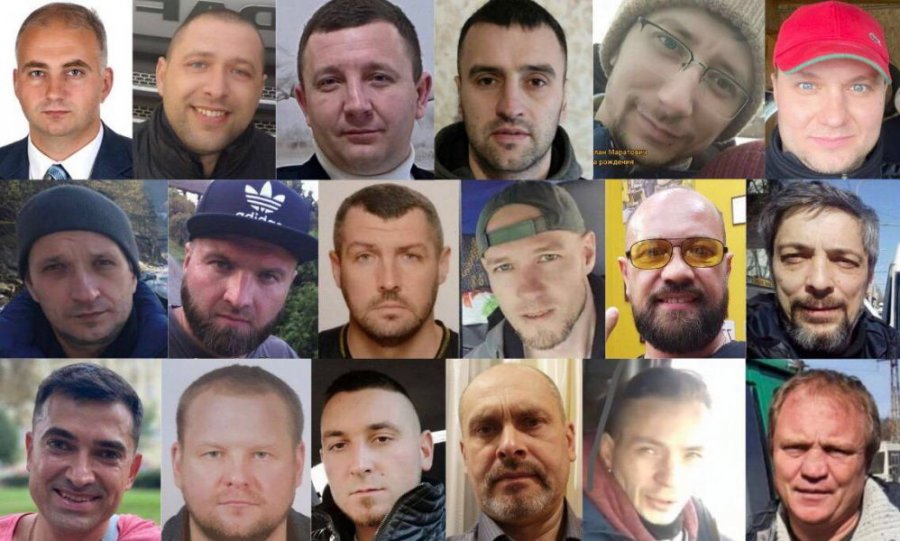 25 volunteer drivers delivering humanitarian aid to Russian-besieged Mariupol have been imprisoned for two months, with the Russian proxy Donetsk ‘republic’, or ‘DPR’, now threatening to put them on ‘trial’.  ‘DPR’, a Russian-installed and controlled illegal armed formation, has now claimed the 25 volunteers were part of a ‘terrorist group’.

Yelizaveta Sokurenko from the Zmina Human Rights Centre reported on 1 June that the families of the men had for a long time kept silent about their abduction, fearing that publicity could hurt them.  They have now learned of ‘DPR’ plans to put the men ‘on trial’, with possible ‘sentences’ of up to ten years, and are calling on the Ukrainian authorities to help secure the men’s release.

The 25 men were all taking humanitarian aid from Zaporizhzhia to Mariupol when they were seized two months ago.  Since then, they have been held prisoner in a prison colony in occupied Olenivka (Donetsk oblast).

According to the partner of one of the hostages, Yevhen Maliarchuk, he and several other drivers and volunteers set off in a minivan to Mariupol in March.  They were carrying humanitarian aid, including a lot of medicines, and were planning to evacuate residents.  They were stopped at a checkpoint controlled either by Russians or by the Russian-controlled ‘DPR’ militants.  Maliarchuk was told to take the aid to Mariupol City Hospital No. 2 which he did.  He also picked up around 20 residents hiding in one of the bomb shelters.

He was stopped again on the exit out of Mariupol with the Russian soldiers who stopped him saying that he “needed to undergo a check”.  He had money with him which he was carrying if he needed to buy things to help people.  The Russians found this and tried to claim that he was taking people out for money.  They also interrogated the people he was carrying who confirmed that he was simply helping them and not asking for money.

The people were forced out of the minivan and sent to a school in Nikolske.  Maliarchuk and eight volunteers were separated off.  They were blindfolded, with their hands tied and forced into another vehicle, and threatened with being shot if they made any moves.  The nine men were taken to Starobeshchevo, and then to the so-called ‘DPR department for fighting organized crime’  After several days, during which all were beaten, a few of the volunteers were freed, while the others were sent to the prison in Olenivka.

It was initially only through the accounts of the men released that the hostages’ relatives had any idea what had happened.  The families united together and did, at least, manage to find out where the men were being held and gain some degree of contact.  Nobody, neither the hostages themselves, nor their families, have any idea why they were seized and why they remain imprisoned.  These were ordinary volunteers simply delivering humanitarian aid and trying to help people.  None had any connection with military formations, and were not carrying any weapons.  The ‘charges’ are under the unrecognized ‘criminal code’ of a Russian puppet ‘republic’, and there are absolutely no grounds for believing that there would be any proper trial.

29-year-old Oleh Prykhodko and his mother, Yulia, were also actively working as volunteers.  They had managed to get to Mariupol, albeit with difficulties, on 29 March.  One of the people in their group was a young woman trying to rescue her mother and child from near the Illich Steel and Iron Works.  Since there was fierce fighting underway, Oleh said that he would try to get them out, but insisted that his mother stay behind, due to the enormous danger.  He set off together with two others, each driving a car.   Yulia saw all three cars stopped at a checkpoint and taken away. She followed them to Nikolske, to the so-called ‘DPR military commendant’ where she identified herself as one of the volunteer’s mothers, and was also taken away. She was thrown into the so-called ‘monkey pen’ where she was held together with over 20 other volunteers or relatives who had come to find them.

She was then taken, together with her son and Yevhen Maliarchuk, all bound and with hoods over their heads, to Starobeshevo.  There she was separated from the other two and held in a cell together with both current and former military servicemen and the relatives of military people.  She recalls that there was a woman journalist (almost certainly Iryna Dubchenko who was, finally, released in a prisoner exchange) whom the Russians and ‘DPR’ militants accused of hiding a wounded Ukrainian defender in her home.

Yulia and other volunteers were held for two and a half days before being dragged off to occupied Donetsk, photographed, interrogated and robbed of the money she was also carrying.  She believes that her captors simply did not understand that the plastic card she also had with her was, in fact, the car key, or they would have also stolen the car.

Since she had thus ‘passed’ the Russians’ so-called ‘filtration’, she has since travelled around occupied territory in order to take her son food, etc.  She has had phone contact with him once, during which he told her that the imprisoned men are being forced to sign blank pieces of paper (on which their captors will, doubtless, later write in various ‘confessions’).

The volunteers are not on the exchange list as the militants in ‘DPR’ are not confirming that they are holding them prisoner.

These are all volunteers risking their lives in war conditions to help residents of Mariupol whom Russia was ceaselessly attacking and holding under siege.  Russia and its puppet armed formations are probably planning to stage some kind of cynical ‘show trials’, with extraordinary charges against men held captive and almost certainly tortured.

All of these methods have, unfortunately, been used in the so-called ‘republics’ since 2014.  Even before Russia’s total invasion on 24 February, they were known to be holding at least 300 civilian hostages or (a minority of) POWs.  Many of these men and women, have also been ‘sentenced’ to 10 or 15 years on charges of ‘spying for Ukraine’ or similar.

See: Russia kills Minsk Agreement, with lives of over 300 Ukrainian hostages and POWs in danger

The imprisoned volunteers whose names are known are:

In one case, the relatives are frightened to reveal the volunteer’s name.

See: Ukrainian medic seized and held captive in Russia for helping evacuate the wounded from Mariupol