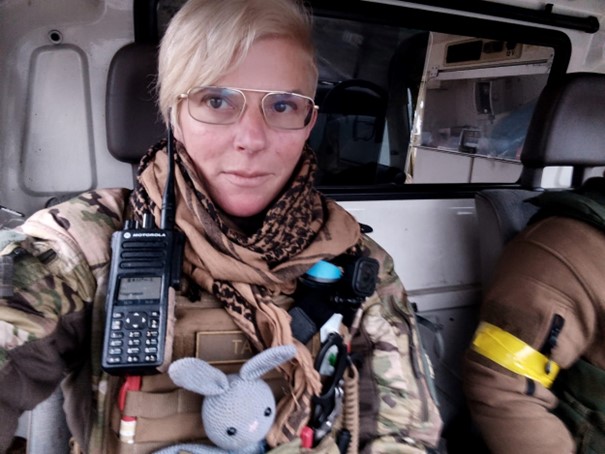 Yulia Paevska in Mariupol Photo shared by her daughter

It is well over two months since well-known Ukrainian medic and sportswoman Yulia Paevska (‘Taira’) was taken prisoner while travelling to treat and evacuate wounded civilians from besieged Mariupol. There is no doubt that she is in Russian custody and was shown in a scurrilous feature on one of Russia’s most notorious propaganda channels NtTV on 21 March.  Russia is refusing to include Paevska on lists of prisoners for exchange and it appears that she is held prisoner by the Russian FSB [security service].

The NTV program made two things very clear.  The first was that Paevska’s captors had not succeeded in forcing her to repeat lies.  Although the report begins with the presenter claiming that the medic had addressed an appeal to “the leadership of the Azov Battalion” who were defending Mariupol against the Russian invaders, this is not true.  Paevska states that she “would like to appeal to those on whom this depends. Please listen to me. In Mariupol, there are very many civilians who could not leave, for this or that reason. The fighting is continuing and the situation is getting more and more difficult.  This is absolutely not the place for women, children and the elderly. I would like a solution to be found which would make it possible to get all civilians out of Mariupol, out of this hell, and to ensure their safe evacuation.”

Russia has been using such videos since the beginning of its invasion in February 2014, with people held incommunicado and without a lawyer forced to say what is demanded of them.  In virtually all cases, the person later retracts supposed ‘confessions’ and provides details of the torture and other forms of duress used to extract them.  It is worth stressing that on this occasion, Paevska has absolutely nothing to retract.  Despite looking as though she has been ill-treated, and clearly prompted at the end (over the date), she makes only a totally reasonable plea for civilians to be allowed to leave the besieged city.  It is the presenter who falsely claims that Paevska was asking this of the Azov defenders.

It was, from the beginning, the Russian invaders who consistently blocked all evacuation of civilians to other parts of Ukraine and who prevented humanitarian aid from reaching those Mariupol residents stranded in the city and under Russia airstrikes and shelling.

The NTV presenter also claims, just as falsely, that Paevska is “a participant” in the Azov Battalion and “a rabid supporter of extremists”.  It is similarly untrue that she was taken prisoner while trying to flee Mariupol “in the guise of a refugee”, with NTV clearly assuming that it could trust its zombified audience to not ask how any of the above would explain her imprisonment.  The presenter claims that there will be “a full interview” later in the week, though this does not appear to have eventuated.  Paevska has not been seen since.  Even if Russia believed her to be a combatant, it would be obliged, under international law, to treat her properly as a prisoner of war. In fact, she was a medic, a volunteer and Russia is in flagrant violation by effectively holding her hostage, without contact with her family or with a lawyer.

It is believed that she was taken prisoner, together with her driver, by fighters from the Russian proxy ‘Donetsk people’s republic’ at a checkpoint at Manhush (near Mariupol) on 16 March.

On 19 May, Associated Press posted a video in which they show some of the hours of bodycam video footage which Paevska had sent them, via a flash drive, before her abduction, in the hope that this would provide vital information about what Russia is perpetrating in Ukraine.  The footage certainly does that, with Paevska seen in one part trying desperately to save the lives of two small children, hit in a Russian attack, and her despair when the little boy’s injuries proved too grave.

The video also makes it clear that Paevska treated everybody, civilians and soldiers.  At one point, she has to explain to Ukrainian civilians why she is treating Russian soldiers, and explains, as any medic should, that they are prisoners of war and she must.

Yulia Paevska first began working as a paramedic during the Revolution of Dignity [the Euromaidan protests].  She continued this work later in Donbas, as well as training people in tactical medicine and helping to evacuate wounded soldiers or civilians.  She is also well-known as a member of Ukraine’s team at the 2018 Invictus Games (where she won a gold medal in swimming, as well as a bronze in archery).

From the beginning of Russia’s full-scale invasion of Ukraine, Paevska led a brigade of volunteers, often referred to as ‘Taira’s Angels’.  They helped evacuate wounded soldiers and civilians, as well as providing emergency care where needed and getting people, when possible, to hospital.  It is believed that she and her team helped save hundreds of lives.

She was formally within the Ukrainian Armed Services for two years, from 2018 to 2020, and headed the evacuation unit of the 61st mobile hospital in Mariupol. She left in 2020, and the work she was doing from February this year was as a volunteer and civilian.

She is awaited at home by her husband, 19-year-old daughter Anna-Sophia, friends and the huge number of Ukrainians who know and value her work and dedication.