Teachers in occupied Kherson refuse to collaborate with Russian occupiers Russia uses terror and abduction in attempt to force schools to collaborate in occupied Melitopol Mayor of Melitopol Ivan Fedorov abducted after refusing to collaborate with the Russian invaders Russian priest arrested and prosecuted for sermon opposing Russia’s war against Ukraine Russia effectively admits it deliberately bombed the maternity hospital in Mariupol that killed three patients, including a childRussia brings grotesque propaganda to Berdiansk after Ukrainian journalists refuse to collaborate Russian invaders murder Ukrainian volunteers Impassioned appeal from Ukrainian Muslim leader in face of Russia’s war to destroy Ukraine Russia is forcing Ukrainians from occupied Crimea and Donbas to fight in its invasion of Ukraine Children among the dead after Russian invaders opened fire on fleeing civilians Russia installs its propaganda TV after seizing Kherson and imposes 15-year sentences for reporting its invasion of UkraineUkrainian survivors of the Holocaust demand Putin and Russia get out of Ukraine Russia continues its carnage, flouting binding order from ECHR to stop bombing civilians in UkraineBabyn Yar bombed by Russia, 80 years after Nazi Massacre of Ukrainian Jews Russia proposes 15-year sentences and threatens "treason charges" for telling the truth about its war crimes in UkraineRussian schoolchildren told that Russia is bombing and killing Ukrainian children in ‘self-defence’ Putin miscalculated. Russia is fighting “an army of 40 million Ukrainians” Chief Rabbi of Ukraine demolishes Putin’s excuse for Russia’s invasion Russia bombs a Ukrainian kindergarten and apartments in its war against independent Ukraine Putin will continue attacking until Russia is stopped. Help Ukraine defend its freedom today!
• Topics / War crimes 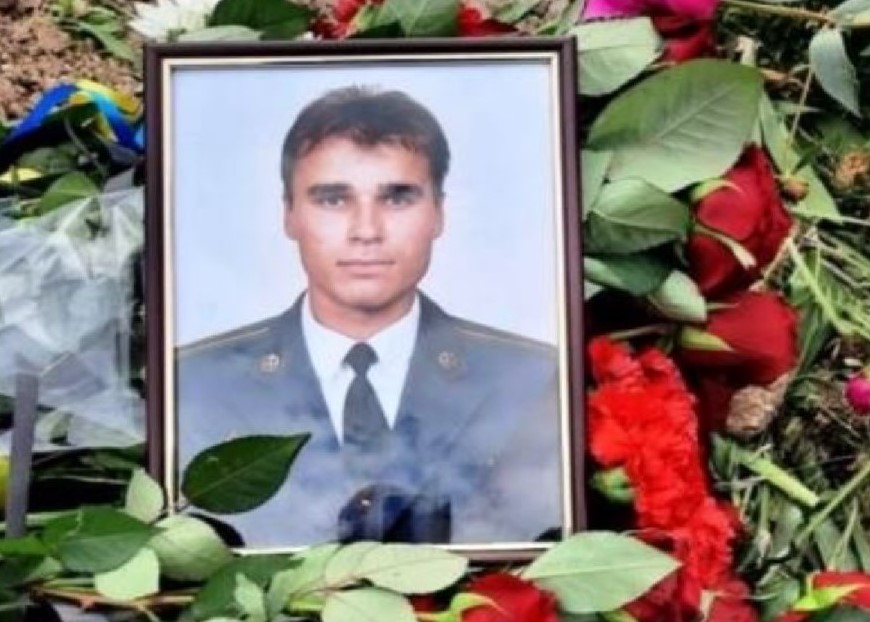 Denys Myronov was buried on 29 May in his native Novomoskovsk.  For the city this was the fortieth funeral of defenders of Ukraine killed since Russia began its full-scale invasion of Ukraine, but there was a difference.  Myronov was seized by the Russian invaders of Kherson and then tortured to death by Russia’s FSB [‘security service]].  “These are the people we’re supposed to greet with flowers?”, the Editor of a local newspaper, Vadym Chervonoshtan, asked bitterly in bidding Denys farewell.  He explained that Myronov, who was married with a young son, had left the army in 2008 and become a businessman, first in Novomoskovsk, then in Kherson.  “But then one Kremlin old man decided that Ukraine has no right to exist… Denis did not break, although he could have saved himself, agreeing to collaborate with the invaders.”

Artur Prikhno from the Media Initiative for Human Rights [MIHR] has provided more details from Denys’ widow, Ksenia, and from others also seized by the Russians.  Myronov had served as a major in the Ukrainian Armed Forces, and remained a reservist.  Both Denys and Ksenia were from military families, and she says that, knowing her husband, she made no attempt to dissuade him from serving in the Territorial Defence.  On the very day of Russia’s total invasion, he went to the Military Recruitment Office to enlist in the Territorial Defence.  That day he was sent away, with the situation seeming so bad, that they told him not to risk his life for nothing.  He came back the following day, and was issued with weapons and met with others, like Vitaliy Lapchuk, also determined to defend their land.

Kherson was overrun by the Russians, making armed resistance impossible.  Instead Myronov and the other men worked as volunteers, bringing bread to the besieged residents.  This enabled them to travel around Kherson and follow the invaders’ positions and their equipment.

Denys kept silent about what he was doing, but did prepare his wife for the worst, warning her that he could be killed.

Myronov was seized, together with Vitaliy Lapchuk, Anton Hladky, and some other Territorial Defence people, in an ambush on 27 March.  The Russians invariably take phones away and copy all the contents, and the message that his wife finally received on the evening of 28 March, saying that he was tired of the struggle and didn’t want to continue was probably not from him.

Vitaliy Lapchuk was long believed to still be in Russian captivity, however his wife reported on 9 June that his body had been found in a river, showing clear signs of torture.  Hladky was finally released and able to recount what he knew of the treatment the men received and of Denys Myronov’s death.

The men were taken to the Kherson regional police department and tortured, with Myronov (and Lapchuk, if he had not already been killed,) receiving particularly savage treatment.  They were held in separate cells for almost 10 days, and it was only on 8 April that Hladky saw Myronov again.  He was in an appalling state and could hardly breathe.  He couldn’t lie down, nor stand up without help, and was constantly coughing and struggling for breath.  His torturers had so beaten him around the chest that one of the fractured ribs had clearly pierced his lung, Hladky explains.

All of them were ‘interrogated’ by the FSB in a separate room.  Hladky explains that the victims were held with a bag over their head, in handcuffs and with their feet bound.  As well as psychological pressure, they were constantly beaten and tortured with the use of electric currents.  On one occasion, Hladky was in the room when Myronov (whom, under the bag, he recognized from his shoes) was brought in.  There were several FSB men there, who first ordered him to stand up and hit him with their fist in the face and then turned on Myronov.  “Legs, shoulders, back, kidneys, they beat out everything.  That’s how they prepare you for a conversation…”

All of the Territorial Defence prisoners were taken to occupied Sevastopol on 18 April.  Denys Myronov was still alive, but so obviously in a critical state that he was immediately placed in hospital.   The others were held prisoner in the Ushakov Maritime University, with the treatment from then on better, probably because an exchange of prisoners was being organized.

Ksenia Myronova did not know what exactly was happening with her husband, but she had every reason to fear for his safety, as well as understanding that she and their son were also in danger.  She told MIHR that the Russians had already abducted one Territorial Defence fighter, together with his wife and son, and she knew that the Orcs (as Ukrainians refer to the invaders) could burst into their home at any time. Having been assured that this could not have any impact on the search for her husband, she took her son to safety away from Kherson on 6 April.  Two days later,  Oleksiy, a man who had been tortured together with Myronov, but later released, arrived at their neighbour’s home and passed on a watch for Ksenia from Denys.  He had been too concerned for his family’s safety to reveal their address, that Oleksiy find their neighbour.

The Russians behaved with cynical brutality to the end, pretending that all was well and assuring Ksenia that they would be releasing her husband.

Denys Myronov died from the injuries caused by FSB torture on 23 April, with the Russians only handing over his body a month later.

Natalia Myronova told MIHR that she is convinced her son was so savagely tortured because they could not break him and he refused to collaborate with the enemy.

“I have one wish only, that the entire world learns about these beasts. Not so much about my son, but about what they are perpetrating. They razing cities and villages to the ground, killing people, torturing and raping women. I want to shout about this to the entire world so that each person learns of this.”