Russia effectively admits it deliberately bombed the maternity hospital in Mariupol that killed three patients, including a childRussia brings grotesque propaganda to Berdiansk after Ukrainian journalists refuse to collaborate Russian invaders murder Ukrainian volunteers Impassioned appeal from Ukrainian Muslim leader in face of Russia’s war to destroy Ukraine Russia is forcing Ukrainians from occupied Crimea and Donbas to fight in its invasion of Ukraine Children among the dead after Russian invaders opened fire on fleeing civilians Russia installs its propaganda TV after seizing Kherson and imposes 15-year sentences for reporting its invasion of UkraineUkrainian survivors of the Holocaust demand Putin and Russia get out of Ukraine Russia continues its carnage, flouting binding order from ECHR to stop bombing civilians in UkraineBabyn Yar bombed by Russia, 80 years after Nazi Massacre of Ukrainian Jews Russia proposes 15-year sentences and threatens "treason charges" for telling the truth about its war crimes in UkraineRussian schoolchildren told that Russia is bombing and killing Ukrainian children in ‘self-defence’ Putin miscalculated. Russia is fighting “an army of 40 million Ukrainians” Chief Rabbi of Ukraine demolishes Putin’s excuse for Russia’s invasion Russia bombs a Ukrainian kindergarten and apartments in its war against independent Ukraine Putin will continue attacking until Russia is stopped. Help Ukraine defend its freedom today!Russian Rule of Lawlessness in Occupied Crimea and DonbasMayor of Melitopol Ivan Fedorov abducted after refusing to collaborate with the Russian invaders Russia uses terror and abduction in attempt to force schools to collaborate in occupied Melitopol Ukrainian journalist Oleh Baturin feared abducted by Russian invaders in Kherson oblast
• Topics / War crimes 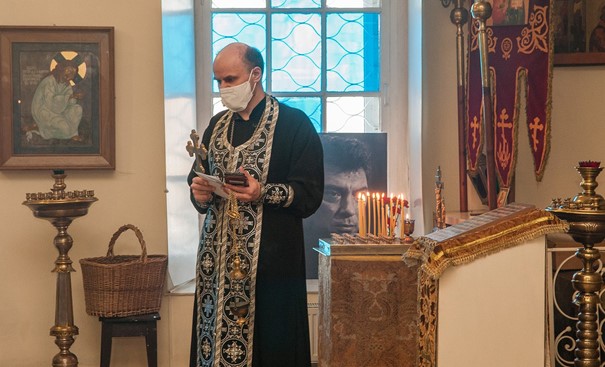 A court in the Kostroma region of Russia has imposed a fairly heavy fine on Father Ioann Burdin, a Russian Orthodox priest who was detained after giving an anti-war sermon on Sunday, 6 March.  The priest is one of the first victims of draconian legislation rushed through parliament and clearly aimed at preventing Russians and Ukrainians in occupied Crimea from hearing and telling the truth about Russia’s invasion of Ukraine and ongoing bombing of civilians.

Father Ioann is the head of the Christ’s Resurrection church in the village of Karabanovo, and had reportedly just given his sermon for Forgiveness Sunday when the police arrived and detained him.  They accused him of ‘discrediting the Russian armed forces and drew up a protocol of administrative charges under the new article 20.3.3 § 1 of Russia’s code of administrative offences.  This new article publishes for something termed ‘public actions aimed at discrediting the use of the Russian Federation armed forces to defend the interests of the Russian Federation and its citizens; the support of international peace and security’.

It was claimed that Father Ioann had committed this supposed offence by speaking out in support of peace in his sermon, as well as through the publication on the Church website of the link to a statement, signed by Father Ioann and Archpriest Georgy Eldenstein condemning Russia’s so-called ‘special military operation on Ukrainian territory’.

In it, the authors write, for example, that “We Christians cannot remain on the side-line when brother kills brother, Christian – Christian. We cannot ashamedly shut our eyes and call black white, evil – good, say that Abel was probably not right, provoking his elder brother” [i.e. Cain].

The administrative protocol accuses Father Ioann of having spoken to the congregation about the presence of Russian armed forces in Ukraine; about the ongoing shelling of Ukrainian cities (Kyiv; Odesa; Kharkiv and others); about the killing of Ukrainians (brothers and sisters in Christ, as well as by placing information with a campaigning image on the website (seemingly the slogan ‘No to War’).

The prosecution was passed to the Krasnoselsky District Court which, on 10 March, found Father Ioann ‘guilty’ and imposed a 35 thousand rouble fine.

On 7 March, Pavel Chikov, head of the Agora Human Rights Group, reported that 60 people had been detained over the new legislation “on military censorship”.  Chikov noted that some were also facing prosecution under the articles on supposedly violating the procedure for holding a meeting.  In Russia and occupied Crimea, it has become next to impossible to hold even the purportedly legal single person pickets, and there have been brutal arrests of those coming out to protest against Russia’s invasion and ongoing war against Ukraine.  Chikov promised that all such prosecutions would be taken to the European Court of Human Rights, however this is probably now in question since Russia’s leaders informed on 10 March that they are pulling the country out of the Council of Europe.

The new article of the Code of administrative offences came into force on 4 March, after a breakneck sprint through both houses of Russia’s parliament.  The new law envisages sentences of up to 15 years’ imprisonment for what are claimed to be ‘fakes’ and ‘discrediting of the Russian army”.  The law has coincided with the banning of a large number of independent media, including Ekho Moskvy and TV Dozhd.  The latter were blocked because they did not use Moscow’s euphemistic language, and used entirely correct words like ‘war’, as well as speaking of the bombing of civilian targets.

It is quite true that the bombing of residential areas, of the children’s hospital and maternity hospital in Mariupol discredits the Russian armed forces, but the answer to this should not be prosecution of those who speak out, and intimidation into silence of others.

Although people now initially face administrative liability for supposed “public actions aimed at discrediting the use of the Russian armed forces for the purpose of defending Russia and its citizens”, they face criminal prosecution if the alleged ‘offence’ is repeated in the space of a year. Such criminal charges could carry a sentence of up to 15 years.

As reported, Russia is seeking to impose its media and military censorship in cities which it is currently occupying.