Tortured to death by Russia"s FSB for helping to defend Ukraine from the invadersTeachers in occupied Kherson refuse to collaborate with Russian occupiers Russia uses terror and abduction in attempt to force schools to collaborate in occupied Melitopol Mayor of Melitopol Ivan Fedorov abducted after refusing to collaborate with the Russian invaders Russian priest arrested and prosecuted for sermon opposing Russia’s war against Ukraine Russia effectively admits it deliberately bombed the maternity hospital in Mariupol that killed three patients, including a childRussia brings grotesque propaganda to Berdiansk after Ukrainian journalists refuse to collaborate Russian invaders murder Ukrainian volunteers Impassioned appeal from Ukrainian Muslim leader in face of Russia’s war to destroy Ukraine Russia is forcing Ukrainians from occupied Crimea and Donbas to fight in its invasion of Ukraine Children among the dead after Russian invaders opened fire on fleeing civilians Russia installs its propaganda TV after seizing Kherson and imposes 15-year sentences for reporting its invasion of UkraineUkrainian survivors of the Holocaust demand Putin and Russia get out of Ukraine Russia continues its carnage, flouting binding order from ECHR to stop bombing civilians in UkraineBabyn Yar bombed by Russia, 80 years after Nazi Massacre of Ukrainian Jews Russia proposes 15-year sentences and threatens "treason charges" for telling the truth about its war crimes in UkraineRussian schoolchildren told that Russia is bombing and killing Ukrainian children in ‘self-defence’ Putin miscalculated. Russia is fighting “an army of 40 million Ukrainians” Chief Rabbi of Ukraine demolishes Putin’s excuse for Russia’s invasion Russia bombs a Ukrainian kindergarten and apartments in its war against independent Ukraine
• Topics / War crimes 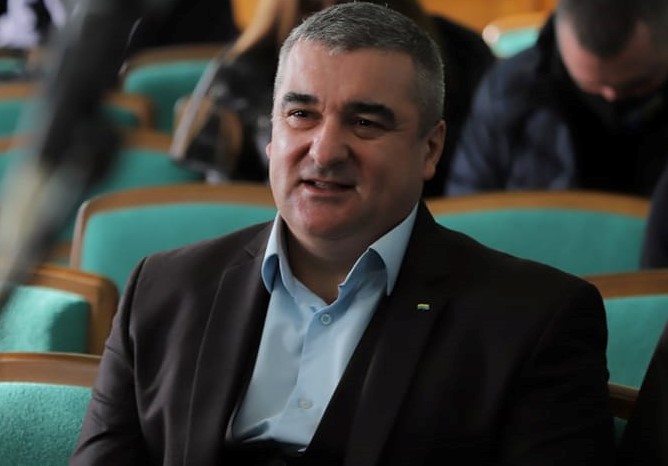 Vitaliy Lapchuk was killed by the Russian soldiers who claimed to be ‘liberating’ Kherson.  Killed, after they savagely tortured him for seeking to defend his country, and after they also seized and terrorized his wife and elder son.

For over two months Alyona Lapchuk hoped against hope that her husband was held in Russian captivity, ill-treated but alive.  She learned on 9 June that his body had been found in a river in the Kherson oblast, with his feet bound.  His body had been tied to a weight, but from what is known of the treatment he received, it is unclear whether he died during torture or was drowned after it.

A day after all hope was lost, Dmytro Lapchuk explained why he is in no doubt that his father was a hero, and spelled out to the Russians who brought tragedy to his family and to Ukraine just why their efforts are doomed.

“I know him and, unlike the enemy (the so-called ‘liberators’), he had no hatred towards his opponent, but he knew exactly FOR WHAT he would stand, and for whose sake. He also understood that when armed men come to your home in order to destroy you, that he would not be able to simply stand by and watch that. Tato [Dad], I know you very well, I know your principles, your worldview, your perception of the surrounding world and believe me, we will do everything correctly. Your memory will endure forever and we will not allow anybody to forget you, your steely will, your determination, your love and dedication which you gave to us every day….”

Dmytro then changed into the Russian language so that “the Russian-jawed supposed liberators’ would fully understand his words. “…. You are trying to convince local residents to end their inner resistance and accept “the new reality”. But the problem for you, and the good fortune for us is that there is no new reality. You are fleeting and extremely unwelcome guests who have, like fleas, gripped on to people’s hair and are sucking blood.  To view you as individuals is to not respect the very concept of an individual since there can be only one emotion towards you – ‘to neutralize’  When cockroaches spread in your home – you don’t hate them, you simply want to neutralize them.  It will be the same with you, and believe me, enough turpentine will be found even when your swarm had spread over different parts of the planet.”

Vitaliy Lapchuk had a PhD in Psychology and had earlier been both a paratrooper and a police lieutenant.  Before the Russian invasion of Kherson oblast, he worked in the Law Faculty of the Kherson Interior Ministry University.  Like Denys Myronov and several other men whom the Russians also seized on 27 March and tortured, he had responded to Russia’s aggression by seeking to take part in the Territorial Defence.  The situation in Kherson became acute almost immediately, however, and there was no sense in openly taking up arms against the heavily armed invasion force.  The men instead worked as volunteers, taking bread to residents in the besieged city.  This made it possible for them to travel around the city and gather important information about the invaders’ movements and their equipment.

Lapchuk, Myronov and several other men were seized in an ambush on 27 March when they were meeting to sort out petrol supplies.  By the time around 9 armed Russians turned up at the Lapchuk home, Vitaliy had been savagely beaten, with his face all in blood, his nose and jaw seemingly broken.  Alyona later explained to the Media Initiative for Human Rights that the Russians had carried out a search of the home.   As well as numerous other items, including their car, which were probably simply plundered, the Russians also found weapons at the house.  This, Alyona explains, was only because Vitaliy had been too responsible to simply leave them lying around when it became clear that the Russians had taken Kherson.  The Russians then took her and the couple’s elder son away as well, with their hands bound and with bags over their heads.

Alyona was forced to hear her husband being ‘interrogated’ with his captors constantly threatening to take him “downstairs”, almost certainly to torture him.

When the Russians said that they would free her, but tried to hold her son, she became hysterical, called them sadists who like to kill and torture.  She told them to beat and torture her, but she would not leave without her son.

The Russians consulted with somebody but did agree to release both Alonya and their son.  When she asked about Vitaliy, they claimed that he had already “confessed to being a terrorist”.

It seems likely that Vitaliy Lapchuk was killed then, with his captors using ever more savage torture to extract their supposed ‘confessions’.  Denys Myronov died from the torture he endured on 23 April, after being taken to a prison in occupied Crimea, together with other men seized at the same time.  It is thanks to the account later given by one of the men who was released, Anton Hladky, that it is known what the men went through.

The Russian invaders began seizing Ukrainians as soon as they gained control over parts of the Kherson and Zaporizhzhia oblast.  The accounts given by those who have since been released, as well as the horrific deaths of Vitaliy Lapchuk and Denys Myronov make it clear what kind of bestial torture they are inflicting on Ukrainians who do not want Russia’s very specific idea of ‘liberation’.