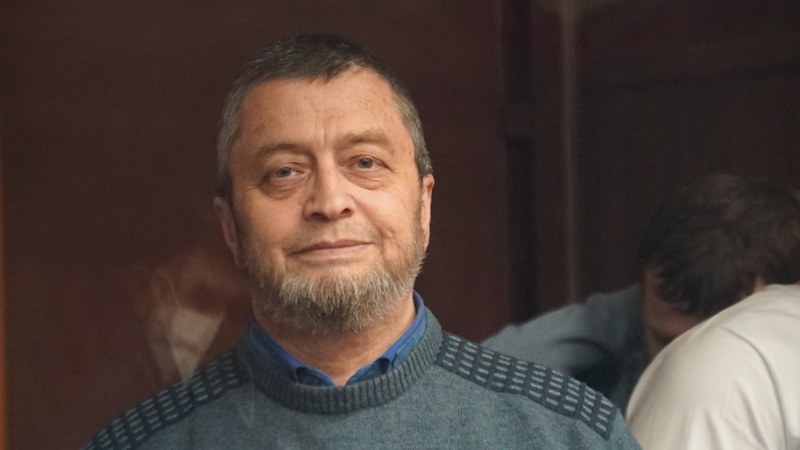 Dzhemil Gafarov has been in a prison hospital in Russia for two weeks, with doctors finally acknowledging that the 60-year-old Crimean Tatar political prisoner is suffering from a condition that should preclude his detention. His condition must be critical as it was clear that Gafarov’s life was in danger over three years ago when he and 24 other Crimean Tatar civic journalists and activists were seized in Russia’s most brazen attack on the Crimean Tatar human rights movement to date.

During the latest hearing at the notorious Southern District Military Court in Rostov-on-Don (Russia), presiding judge Valery Opanasenko read out the medical report prepared by doctors at the tuberculosis hospital where Gafarov is expected to spend at least two more weeks.

Third level hypertension is listed in the Russian government’s Resolution No. 3 on medical conditions which are incompatible with detention.  As Crimean Solidarity points out, this means that, even according to Russian law, Gafarov cannot be held in a SIZO [remand prison] or any other penitentiary institution.

Gafarov has told his lawyer that he is not receiving any treatment as such.  In the 15 days he has been in hospital, he has not been told what his diagnosis is, nor has he been treated for anything. “They’re studying something.  In all this time, they haven’t even given me one tablet.”

It is, unfortunately, likely that the doctors know that Gafarov is gravely ill and should be released immediately, but are equally well aware that he is a political prisoner.  The same is true of all those Russian officials implicated in his and the other men’s persecution.

Dzhemil Gafarov is a structural engineer by profession.  He was diagnosed in 2017 with fourth stage chronic kidney disease, one level before kidney failure, and that same year suffered a serious heart attack.  Even before his arrest, his kidney filtration level was between a quarter and a third of what it would be for a person in good health.  Such a filtration rate means that he is effectively experiencing a permanent state of blood poisoning.

Back in November 2019, Olga Mazurova, the Russian doctor who initiated a petition calling for Gafarov to be released from custody, warned that Gafarov’s condition was typical of a person in pre-dialysis stage.  Connection to a dialysis machine would remove the waste products and excess fluid from his blood, which the kidneys are unable to do.

The appeal pointed out that patients with kidney disease need to have regular checks of the level of creatinine in their urine to monitor how well, or otherwise, their kidneys are functioning.  They also need a proper diet, exercise and living conditions.  Instead, the Russian prison authorities and the court have simply ignored Gafarov’s condition.  Essentially none of them has been willing to take the risk of annoying those behind his imprisonment by, at the very least, releasing him under house arrest.

As reported earlier, even the procedure required for Gafarov to retain his disability status was neglected, enabling the SIZO medical unit to claim that they had no documents confirming this status.  In November 2021, Gafarov told his lawyer that his kidney disease was progressing and that he suspected that he would not last another six months without dialysis.  Instead of adequately reacting, the prison medical staff would, at most, give him some validol. They did not take any urine samples or blood tests.  For a dangerously long time, the court has also done nothing, despite the number of hearings that have needed to be adjourned because ambulances had to be called for Gafarov and / or 61-year-old Servet Gaziev, who is also in extremely ill health.

Neither Dzhemil Gafarov, nor any of the 24 Crimean Tatar civic journalists and activists imprisoned with him, are accused of any recognizable crime.  Although prosecuted under Russia’s flawed ‘terrorism’ legislation, they are essentially accused only of unproven ‘involvement’ in the peaceful pan-Muslim Hizb ut-Tahrir  organization which is legal in Ukraine and which is not known to have committed acts of terrorism anywhere in the world.

Since 2016, the FSB have been using ‘Hizb ut-Tahrir’ charges in occupied Crimea as a weapon of repression, especially against civic journalists and activists from the Crimean Solidarity civic initiative.  There is no evidence that the men were actually involved in Hizb ut-Tahrir, but this is no problem for Russia’s ‘justice system’ which uses FSB-loyal ‘experts’ to find ‘proof’ of involvement in an innocuous word  or in conversations about repression in Russia, as well as ‘secret witnesses whose ‘testimony’ cannot in any way be verified.  In this case, the conversations took place almost three years before the huge armed operation to seize the men.

Please write to Dzhemil Gafarov and the other political prisoners!

The more letters they receive, the more Moscow will understand that its torment of men like Dzhemil Gafarov and Servet Gaziev is under scrutiny.