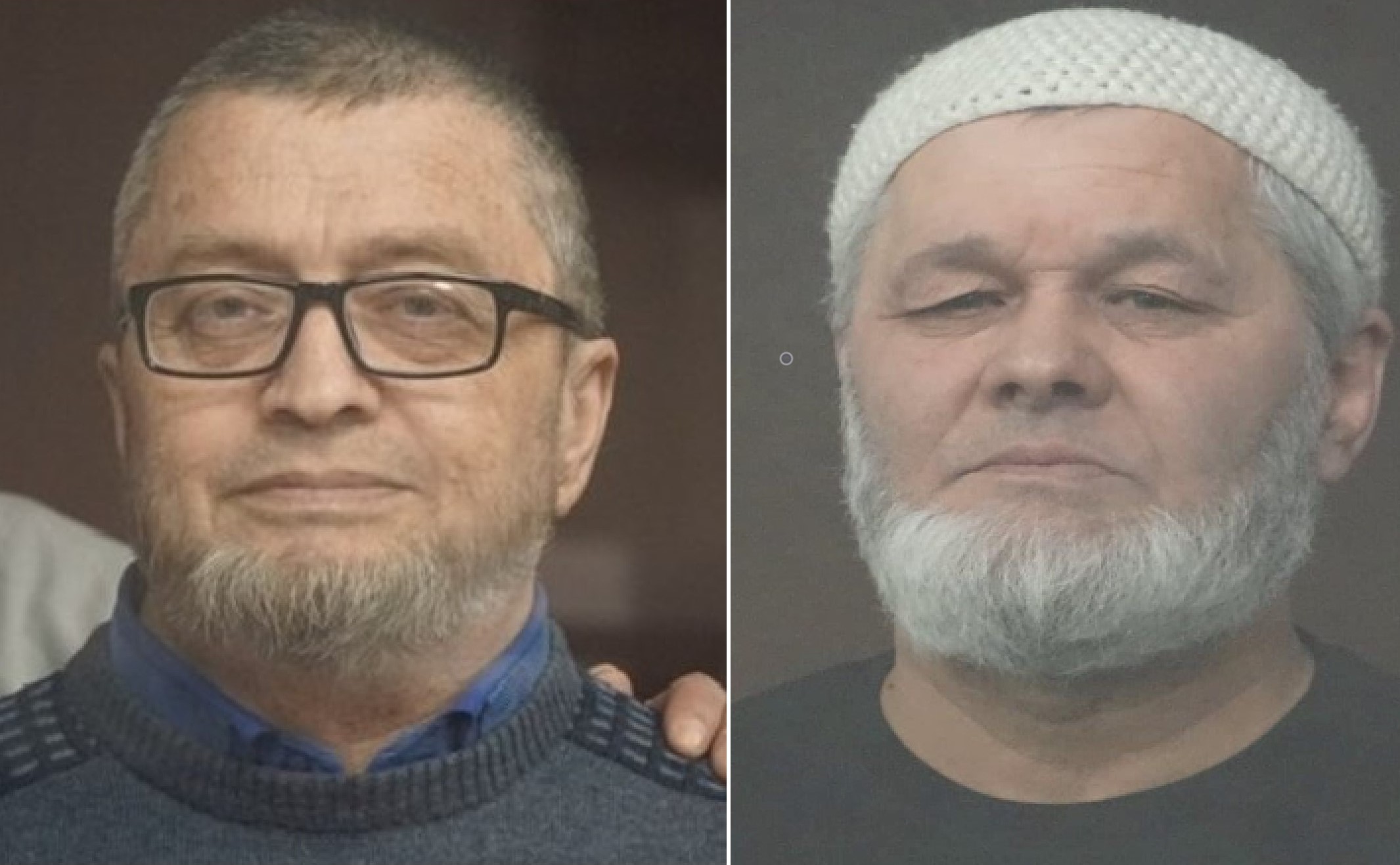 A Russian court has sentenced five Crimean Tatar recognized political prisoners to 13 years’ imprisonment, despite knowing that for two of the men, 60-year-old Dzhemil Gafarov and Servet Gaziev (62) this is a death sentence.  Not one of the men was accused of a recognizable crime, with the charges against them and 20 other Crimean Tatar civic journalists or activists based solely on a harmless discussion on religious and political topics three years before their arrest and on the ‘testimony’ of anonymous witnesses.

The sentences against Dzhemil Gafarov, Alim Karimov; Seiran Murtaza; Erfan Osmanov, and Servet Gaziev were essentially those demanded by Russian prosecutor Alexander Bondarev, except that the two-year period to be spent in a prison, the very worst of Russian penitentiary institutions, is much less than the five years which Bondarev wanted.  This, however, means little as the remainder of the sentence is for harsh-regime prison colonies, where the conditions are also intolerable.  The final cynical touch came from the additional sentence of 18 months restriction of liberty in the case of Gaziev and Karimov, and one year for the others. 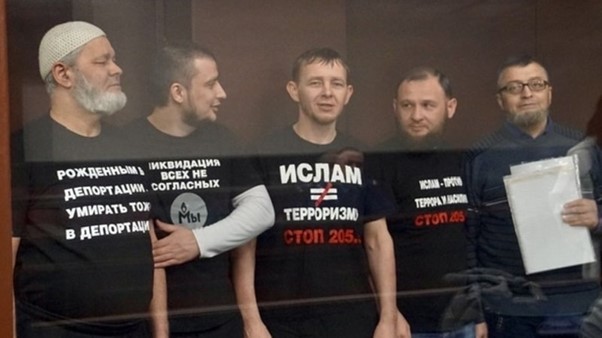 From left Servet Gaziev; Alim Karimov, Seiran Murtaza, Erfan Osmanov and Dzhemil Gafarov Photo Crimean Solidarity
The Russian ‘judges’ who passed these sentences on 11 January 2023  – Valery Opanasenko (presiding); Andrei Zarya and Stanislav Zhidkov from the notorious Southern District Military Court in Rostov must be held to answer, and not only for taking part in this internationally condemned act of reprisal against members of the Crimean Tatar human rights movement.  The ‘judges’, like prosecutors Alexander Bondarev and Igor Nadolinsky, have ignored the evident risk to the lives of two of the men.

With respect to Dzhemil Gafarov (b. 1962), all of the above are even flagrantly violating Russian legislation, since Gafarov has medical issues that mean that he should never have been placed in detention following Russia’s mass arrests of civic activists and journalists on 27 March 2019.

A structural engineer by profession, Gafarov was diagnosed in 2017 with fourth stage chronic kidney disease, one level before kidney failure, and that same year suffered a serious heart attack.  Even before his arrest, his kidney filtration level was between a quarter and a third of what it would be for a person in good health.  Such a filtration rate means that he is effectively experiencing a permanent state of blood poisoning.

Instead of acknowledging the grave danger, the ‘court’ constantly rejected calls for him to at least be placed under house arrest, and continued with gruelling court hearings that placed a huge strain on Gafarov’s health.  On 27 October 2022, he had a heart attack, yet even then the ambulance team did insist that he be hospitalized.  Gafarov informed the court that he was suffering agonizing pain in his joints, and pleaded for at least a reduction in the number of hearings to one a weeks, so that he could recover each time from the extra strain of having to walk upstairs, sit for a long time in one position, etc.

This was after the court had received a medical report from a previous occasion when Gafarov’s condition became so acute that he was actually admitted to the prison hospital.  His diagnosis included arteriosclerotic heart disease; post-heart attack cardiosclerosis;  angina with chest pressure of classes I and II; chronic kidney insufficiency; chronic inflammation of part of the kidney (chronic interstitial nephritis); third level hypertension; primary arterial hypertension and a very high risk of fourth level cardiovascular complications. Third level hypertension is listed in the Russian government’s own Resolution No. 3 on medical conditions which are incompatible with detention.

Opanasenko not only rejected Gafarov’s plea but seems to have even speeded up the process.  Last Friday, the men were effectively deprived of their right to make a final address to the court.  Opanasenko refused to do anything but continue the same hearing until 10 p.m. that night, with the men not having been given any opportunity to prepare their speeches.  Then, when Gafarov attempted to make his address in Crimean Tatar, a language which the Russian occupation regime claims to be one of the three official languages but which Russian courts prevent defendants from using.

Servet Gaziev (b. 1960) did not have disability status before his arrest in March 2019, but he did have chronic conditions, with these gravely exacerbated by the appalling conditions of detention in occupied Crimea and Russia.  He almost certainly suffered a micro stroke on 28 June 2022, however no action was taken by the SIZO [remand prison] administration.  The SIZO prison staff simply pump Gaziev full of painkillers, a practice that Gaziev’s sister, Svitlana Ablyamitova, a doctor by profession, says is extremely dangerous, especially since her brother has constantly complained of acute stomach pain.  One of the ambulance doctors earlier concluded that Gaziev was suffering from chronic cholecystitis - an inflammation of the gallbladder, causing abdominal pain, vomiting and possibly fever.  Neither Gaziev’s age, nor his frail state, stopped staff from the prison hospital from beating him and forcibly cutting off his beard after he refused to ‘vote’ in Russia’s faked parliamentary ‘elections’.

Dzhemil Gafarov; Servet Gaziev; Alim Karimov; Seiran Murtaza and Erfan Osmanov were all arrested on 27 March 2019 in Russia’s worst offensive to date against the important Crimean Solidarity human rights initiative and Crimean Tatar journalists and activists in general.  25 men were arrested either then or soon afterwards and all have been in custody ever since.

This mass attack aroused international condemnation and demands for the men’s release, from, among others, the US State Department, Human Rights Watch, Freedom House and the European Parliament.  Human Rights Watch, for example, called the arrests “an unprecedented move to intensify pressure on a group largely critical of Russia’s occupation of the Crimean Peninsula” and said that attempts “to portray politically active Crimean Tatars as terrorists” were aimed at silencing them.  The Memorial Human Rights Centre was swift to declare all the men political prisoners, stating that Russia was using fabricated charges carrying huge sentences to try to crush Crimean Solidarity and the Crimean Tatar human rights movement.

Since that time, internationally prominent figures, such as US political analyst Francis Fukuyama and the former US Ambassador to Ukraine William Taylor have written letters to individual political prisoners (journalists Osman Arifmemetov and Remzi Bekirov, respectively) expressing gratitude for their courage and clearly linking their persecution with their willingness to speak out about repression under Russian occupation.

Over almost four years, Russia used various methods to avoid publicity over this shocking case including by dividing the one prosecution into five identical cloned ‘trials’.  Each was based on the same innocuous discussion, with the same ‘expert assessments’ from FSB-loyal ‘experts’ and the same anonymous ‘witnesses’ who may not have even known the men.

All of the men were charged only with ‘involvement’ in the Hizb ut-Tahrir movement, a peaceful transnational Muslim organization which is legal in Ukraine and which is not known to have carried out acts of terrorism anywhere in the world. Russia has never provided any grounds for its highly secretive 2003 Supreme Court ruling that declared Hizb ut-Tahrir ‘terrorist’, yet this inexplicable ruling is now being used as justification for huge sentences on supposed ‘terrorism charges’.   Memorial HRC has stressed that Russia has not once, in any of these prosecutions, provided any evidence of “terrorism, or even of plans or discussion of terrorist acts or the use of weapons”.

Some of the men faced the more serious charge of ‘organizing’ a Hizb ut-Tahrir group (Article 205.5 § 1 of Russia’s criminal code).  Others were accused under Article 205.5 § 2 of ‘involvement’.  The distinction seems largely arbitrary, but the ‘organizer’ charge carries sentences at present of up to 19 years.  In at least one of the cases, that of Rayim Aivazov, the decision to change the charge to the more serious Article 205.5 § 1 was almost certainly in reprisal after he refused to remain silent about the torture he was subjected to during his arrest.  Russia, the aggressor state, which invaded and annexed Crimea also charged all 25 Ukrainian citizens with “planning a violent seizure of power and change in Russia’s constitutional order” (Article 278).

There were no grounds or evidence for any of the above charges, and the ‘testimony’ of the secret witnesses was clearly closely coordinated with the prosecutor.

Although all of the sentences are still subject to appeal, the Russian ‘courts’ have to date given no grounds for expecting any justice from such hearings.  With the sentences passed on 11 January, Russia has thus sentenced 25 Crimean Tatars, whose only ‘offence’ was to care about their compatriots who were facing persecution, to a total of 355 years.

Please write to one or more of the men!

The more letters they receive, the more Moscow will understand that its torment of men like Dzhemil Gafarov and Servet Gaziev is under scrutiny.  Letters need to be in Russian, and on ‘safe’ subjects.  If that is a problem, use the sample letter below (copying it by hand), perhaps adding a picture or photo. Do add a return address so that the men can answer.  The addresses can be written in either Russian or in English transcription.  The particular addressee’s name and year of birth need to be given.

Details about the other men’s sentences and their addresses for letters can be found by clicking on the links below: