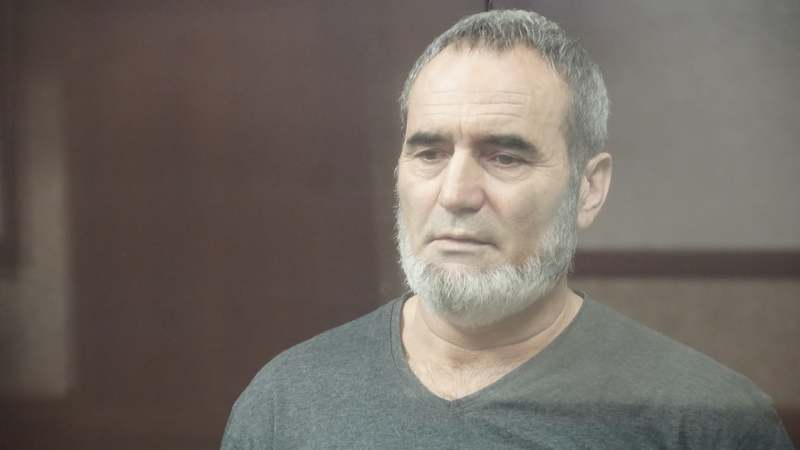 Over a month after 59-year-old Azamat Eyupov almost certainly suffered a stroke in Russian detention, agreement has finally been reached for him to receive an ultrasound scan of his heart and MRI scan of the brain.  Although the veteran of the Crimean Tatar national movement and recognized political prisoner cannot use his right arm, is dragging one leg and has severely impaired speech, all clear symptoms of a stroke, he has received no medical care, merely tablets to reduce dangerously high blood pressure.

Eyupov’s lawyer, Emil Kurbedinov informed the Southern District Military Court in Rostov on 22 June that agreement had been reached with the Zheleznodorozhnaya Hospital in Rostov for the scans on 8 July.  Now the SIZO [remand prison] has to also agree to ensure that Eyupov is brought to the hospital.

Earlier in June, the SIZO medical staff claimed that Eyupov has ‘osteochrondosis’  (a group of orthopaedic disorders, which, in humans, appear in childhood or adolescence) Lawyers assume that this rather strange ‘diagnosis’ enabled the SIZO personnel to avoid providing a more serious (and accurate) assessment of the political prisoner’s condition, one that would be less difficult to ignore.

It was initially thanks to fellow Crimean Tatar political prisoner and civic journalist Ruslan Suleimanov that Eyupov’s condition even became known.  Eyupov has since told Kurbedinov that it was Ruslan who carried him around the SIZO on his back, including to the medical unit in the hope of his at least receiving the minimum of medication.

Azamat Eyupov is facing a 15-20-year sentence without any crime, on the basis of ‘prohibited literature’ planted when the FSB burst into his home at 4 a.m. on 17 February 2021 and because of a taped conversation about religion and Russian persecution.  There should, in any case, have been nothing ‘incriminating’ in such a conversation, but the voice on the tape is not Eyupov’s.  The fact that the voice is not his has been confirmed by independent experts, but is clearly being ignored, in favour of the vague conclusion of an unqualified but FSB-loyal phonographic ‘expert’.  It is believed that the voice, in fact, belongs to a citizen of Uzbekistan who was living in occupied Crimea, but who has now left the peninsula.

Eyupov is one of around 20 Crimean Tatars, most of them in their fifties and sixties, who took part in a peaceful picket on Red Square in Moscow on 10 July 2019, calling for an end to ethnic and religious persecution in Russian-occupied Crimea.  They held placards reading “Our children are not terrorists”; “The fight against terrorism in Crimea is a fight against dissidents” and “Stop persecution on ethnic and religious lines in Crimea”, together with the photos of four political prisoners whose appeal was to be heard the following day.  Although the men simply stood, apart from each other, but in a line, seven were detained and prosecuted under Article 20.2 of Russia’s code of administrative offences with supposed ‘infringement of the established procedure for holding a meeting’.   The protest came almost exactly 32 years after Eyupov and other activists from the Crimean Tatar national movement held a large demonstration on Red Square demanding the right to return to their native Crimea after 43 years in enforced exile.  That earlier protest was vital in gaining international publicity for the plight of the Crimean Tatars in the Soviet Union.

Eyupov had also taken part in many other single-person pickets and flash mobs in support of political prisoners, and also regularly attended political court hearings before, on 17 February 2021 he became one of the latest of many civic journalists or activists whom Russia has been targeting with particular ferocity since 2017.

Although Russia uses these prosecutions to try to crush the Crimean Tatar human rights movements, they also provide easy ways for the FSB to improve their ‘statistics’ and gain promotion or bonuses, with minimum effort.  In this case, Eyupov’s prosecution was simply added to one that had already resulted in horrific sentences against three political prisoners from Bilohirsk: Enver Omerov (18 years); his son Riza Omerov (13 years) and Aider Dzhapparov (17 years).

Like the Omerovs and Dzhapparov, Eyupov is accused solely of unproven involvement in the peaceful transnational Muslim Hizb ut-Tahrir organization which is legal in Ukraine and which is not known to have committed any acts of terrorism or violence anywhere in the world.   The Russian Supreme Court ruling in 2003 which declared it a ‘terrorist’ organization was deliberately kept secret until it was too late to challenge it, and Russia has never provided any convincing justification for the decision.  All of the men were recognized by the Memorial Human Rights Centre as political prisoners (‘were’ because Russia has since dissolved this vital human rights NGO).

The FSB invariably designates at least one person as ‘organizer’ of the supposed Hizb ut-Tahrir group, while others are accused of ‘involvement’ in that group.  The choice seems rather arbitrary but does usually make a difference of five years or more to the sentence.  Both Enver Omerov and Aider Dzhapparov were charged as ‘organizers’, under Article 205.5 § 1 of Russia’s criminal code and also accused of ‘planning to violently seize power’, under Article 278.  As noted by Memorial HRC, the arguments used to justify this second charge are identical to those used for the ‘terrorism’ charge, and seem clearly aimed only at propaganda and at justifying huge sentences.  Although arrested almost two years after the other men, Eyupov is also accused of having been ‘an organizer’, and could face a sentence of up to 20 years, without any crime whatsoever.

Letters tell him that he is not forgotten and ensure that both the prison staff and Moscow know that their actions are under scrutiny. Letters need to be in Russian, and on ‘safe’ subjects.  If that is a problem, use the sample letter below (copying it by hand), perhaps adding a picture or photo. Do add a return address so that he can answer.

The other men now serving horrific sentences would also be very grateful for letters!