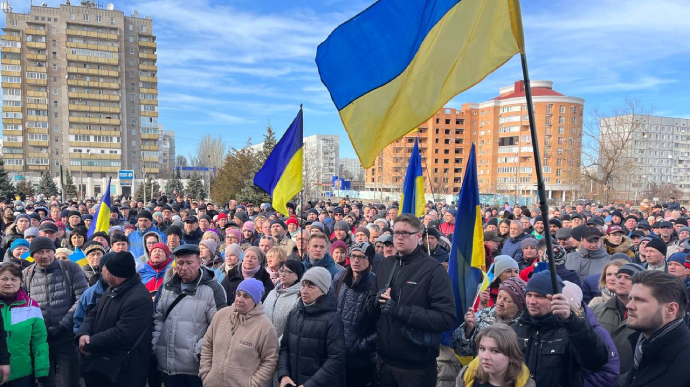 People begin disappearing as soon as Russians seize any Ukrainian territory.  The abductions are aimed at removing those viewed as ‘ideologically unreliable’ (for their active support of Ukraine and / or opposition to its invasion) and at terrorizing others into silence and submission. In very many cases, however, they are banal attempts to extract large ransoms.  The fact that the Russian invaders are now making money on the side by kidnapping Ukrainians is yet further confirmation, should any be required, that Russia’s full-scale invasion in February 2022 is a continuation of the war that Russia has been waging since 2014.  Back then, Russia claimed that there was a so-called ‘civil war’ in Ukraine and if Russians were caught engaged in ransom-taking and other criminal activities, that these were ‘volunteers’, for whom the Russian state bore no responsibility.  Russia can no longer deny direct involvement in what is proving to be the same criminality and atrocities, just on a larger scale.

Enerhodar, the city next to the Zaporizhzhia Nuclear Power Plant in Zaporizhzhia oblast, has been under Russian occupation since 4 March.  As in other parts of the Zaporizhzhia and Kherson oblasts, thousands came out in protest, trying to block the Russians from reaching the city and the nuclear power plant.  Since they overran both, the Russians have used abductions, torture and violent dispersal of demonstrations, to crush open opposition.

On 20 March, Dmytro Orlov, Mayor of Enerhodar reported that his first Deputy Mayor, Ivan Samoidiuk had been abducted.   He wrote then that the invaders, having failed to get the local government to collaborate, had resorted to openly criminal acts.  As of 17 May, there had been no contact with him at all, and there is nothing to suggest that the situation has changed for the better.

On 27 March, the Russians installed Andriy Shevchuk, a local deputy from the main pro-Russian opposition party (now banned in Ukraine) as so-called leader of a ‘city self-organization council’.  All of the real (i.e. elected) members of the Enerhodar City Council, resigned so as to not collaborate with the occupation regime.

On 26 June, Orlov reported that the Russians are holding “hundreds” of hostages, with a considerable number of these being skilled employees from the Zaporizhzhia Nuclear Power Plant.  He writes that people are tortured with electric currents, beaten and imprisoned for weeks, or sometimes even months. Their captors try to get them to ‘confess’ to ‘illegal activities’, with the latter meaning, for example, taking part in the self-defence of the city or concealing weapons.  They also demand that the hostages give the names of supposed ‘accomplices’.  All such demands, it should be stressed, can be with the threat of again having agonizingly painful electric currents attached to fingers, earlobes, or even genital parts and passed through the body.  Orlov is surely right in saying that the Russians really couldn’t care less whether their victim genuinely took part in the self-defence, etc.  If at first they seized only men, now women are also taken hostage.  Once they’ve seized somebody, Orlov notes, it is extremely rare for them to be released without suffering physical or psychological torture or “material loss”.

As well as the ‘political’ hostages, there are also those who are seized for ransom, with the standard amount extorted (either from the victim him/herself or their family)  being 50 thousand UAH.  Orlov writes that the situation has become worse over the past two weeks (up till 26 June), with the real authorities received two or three reports of abductions each day.

“Russian world’ has nothing in common with the picture which the invaders paint on their television and Telegram channels.  They have brought into the city of energy workers only torture and total terror.”

As mentioned, the Russian proxy ‘Donetsk and Luhansk people’s republics’ have been using essentially identical methods, both of torture and of extortion, since 2014.  At the beginning of Russia’s full-scale invasion of Ukraine, the identity was known of over 300 civilian hostages and POWs held in occupied Donbas, however the real figure was likely to be much higher.  There were also a huge number of people who were, from the outset, abducted because one of the Russian or Russian-controlled militants wanted their car, their business or a ransom.  This too is part of the invaders’ ‘Russian world’.