Young Crimean Tatar likely tortured into ‘confessing’ to anti-war protest Imprisoned in occupied Crimea for opposing Russia’s war against Ukraine Ukrainian seized and sentenced in Russian-occupied Crimea for pro-Ukrainian social media commentsArtist disappears after arrest for pro-Ukrainian anti-war protest in Russian occupied Crimea Crimean teacher dismissed and threatened with prosecution for telling students the truth about Russia’s war against UkraineRussia installs its propaganda TV after seizing Kherson and imposes 15-year sentences for reporting its invasion of UkraineUkrainian survivors of the Holocaust demand Putin and Russia get out of Ukraine Russia continues its carnage, flouting binding order from ECHR to stop bombing civilians in UkraineBabyn Yar bombed by Russia, 80 years after Nazi Massacre of Ukrainian Jews Russia proposes 15-year sentences and threatens "treason charges" for telling the truth about its war crimes in UkraineRussian schoolchildren told that Russia is bombing and killing Ukrainian children in ‘self-defence’ Putin miscalculated. Russia is fighting “an army of 40 million Ukrainians” Chief Rabbi of Ukraine demolishes Putin’s excuse for Russia’s invasion Russia bombs a Ukrainian kindergarten and apartments in its war against independent Ukraine Putin will continue attacking until Russia is stopped. Help Ukraine defend its freedom today!Russian Rule of Lawlessness in Occupied Crimea and DonbasJail or steep fines in Russian-occupied Crimea for playing a Ukrainian anti-war song or for saying ‘Glory to Ukraine’ 61-year-old Russian given 7-year prison sentence for criticizing Russia’s war against Ukraine, in bitter déjà vu from Soviet times Russia sentences Ukrainian Jehovah’s Witnesses to six years for Zoom conversation about the BibleChildren trained to be ‘Putin’s faithful soldiers’ in Russian-occupied Crimea
• Topics / News from the CIS countries
• Topics / Human Rights Abuses in Russian-occupied Crimea 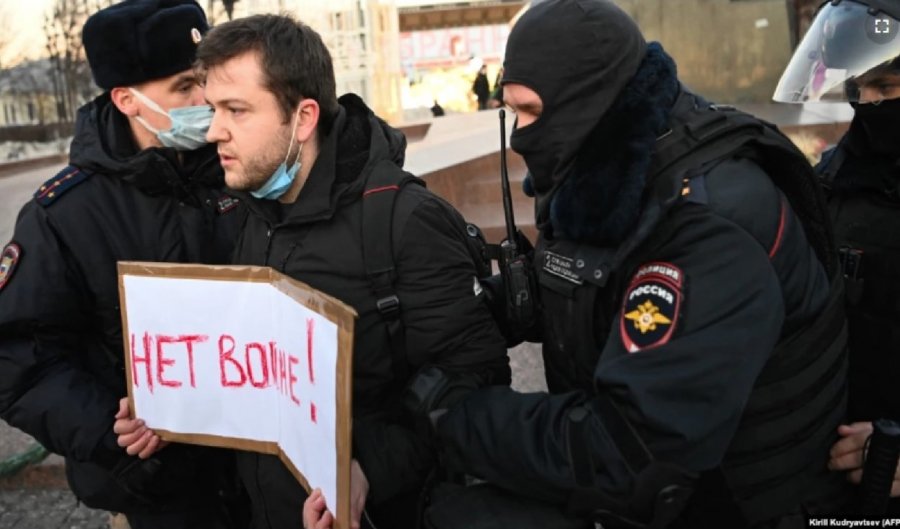 Protester with a No to War placard being detained in Russia Photo Kiril Kudryanstsev, AFP

Russia’s State Duma has adopted a draft bill allowing the prosecutor general to close media in Russia or occupied Crimea for so-called ‘fakes’, ‘discrediting the army’; ‘disrespect for the authorities’ or for calls to impose sanctions.  The new powers, included in a bill claiming to enable mirror reactions to ‘unfriendly actions’ against Russian media abroad, come at a time when Russians and Crimeans are facing fines or imprisonment for either reporting the truth about Russia’s war against Ukraine, or expressing opposition to the war.

The bill in question () is described as ‘amendments to certain RF legislation on specifying procedure for the circulation of information’.  It was passed in its third, and final, reading on 30 June and will almost certainly be swiftly signed into law by Russian leader Vladimir Putin.

The new powers regarding the closure of media could, in fact, have been worse.  Current Time that at the final reading a change was made, introducing the so-called ‘right to a mistake’, meaning that media will not be stripped of their registration or blocked immediately and for good.  The prosecutor general will be able to close media or revoke licences, without any court order, if they deem the media to be circulating ‘unlawful and dangerous information’, or information expressing ‘overt disrespect to society and the RF Constitution’.  The decision to block or close will be passed to Russia’s effective censor, Roskomnadzor.   The ‘right to a mistake’ is reflected in the fact that if the authorities deem the media to have rectified ‘the violation’ within 3-6 months, their activities can be reinstated, with this carried out by Roskomnadzor. The media’s registration can, however, be declared null and void if they are alleged to have committed several violations.

describes the bill as being about symmetrical retaliatory measures in response the banning of Russian media abroad.  The prosecutor general or his deputy will also be able to ban or restrict the actions of publications of a country which has carried out what are claimed to be “unfriendly actions with respect to Russian media”.

In fact, Russia has already taken many such retaliatory measures although the situations can in no way be said to mirror each other.  The EU, for example, , envisaging the immediate suspension of the broadcasting activities of the Russian state-owned Russia Today (RT) and Sputnik. This was “in response to Russia’s unprovoked and unjustified military aggression against Ukraine” and was by no means an arbitrary choice of targets.  As the EU statement made clear, “Sputnik and Russia Today are under the permanent direct or indirect control of the authorities of the Russian Federation and are essential and instrumental in bringing forward and supporting the military aggression against Ukraine, and for the destabilisation of its neighbouring countries.

The Russian Federation has engaged in a systematic, international campaign of disinformation, information manipulation and distortion of facts in order to enhance its strategy of destabilisation of its neighbouring countries, the EU and its member states.”

Russia’s retaliation thus far has largely targeted specific journalists, politicians and commentators, with these invariably the people most willing to ask hard-hitting questions and call things by their real name.

The Duma passed the first, most extreme, bill on 4 March, ten days after Russia began its full-scale invasion of Ukraine, with Putin signing it into force that very same day.  The law envisages possible sentences of up to fifteen years for what the current regime chooses to claim are ‘fakes’ and ‘discreditation’ of the Russian army.  Criminal lability is imposed for what is referred to as the “public circulation of knowingly false information about the RF armed forces” and “public acts aimed at discrediting the use of the RF armed forces for the purpose of defending the interests of the RF and its citizens, support of international peace and security”.   This carries a punishment of three years’ imprisonment, unless it is committed by a group, for profit, or “for motives of political, ideological, racial, national or religious hatred”.  Conviction on the latter charges could get you imprisoned for ten years, or fifteen, if it was claimed that it caused “grave consequences”.

OVD Info on 15 June that they were aware of at least 59 criminal prosecutions resulting from the above law, and two sentences.  It is clear that the charges are laid against people who are expressing protest at the war and who tell the truth about what is happening.   Well-known opposition figure Vladimir Kara-Murza has been in custody since 11 April and is charged under Article 207.3 2 for an interview in which he condemned the war.  A St Petersburg artist Sasha (Aleksandra) Sochilenko was arrested and placed in detention on 31 March.  She is accused of having discredited the armed forces out of ‘political hatred for Russia’ by replacing price tags in a supermarket with bits of paper providing truthful information about, for example, Russia’s bombing of the Drama Theatre in Mariupol where up to a thousand people were seeking shelter from the relentless bombing.  Hundreds are believed to have been killed.  On 29 June, Dmitry Talantov, one of the lawyers representing journalist and political prisoner Ivan Safronov, for two months after his arrest the previous day. He too his facing charges under Article 207.3 over a Facebook post on 3 April in which he called Russia’s actions in Kharkiv; Mariupol; Irpin and Buch “extreme Nazi practice” and was very negative about any of his compatriots prepared, after the photos and videos from those Ukrainian cities, to support “murderer Pu” & Co.   He faces up to 10 years’ imprisonment for such essentially anti-war statements on social media.

Russia is also using other, equally questionable charges, including in occupied Crimea.  Two young men (Aziz Faizulaev, Bohdan Ziza (Azizov)) are in custody and may face ‘terrorism’ charges over two alleged protests that, at most, involved petrol bombs that did not hurt anybody.  In both cases, there are grounds for doubting the charges.

The 4 March law also established administrative liability for what are called “public actions aimed at discrediting the use of the Russian armed forces for the purpose of defending Russia and its citizens, including calls to obstruct the use of the Russian forces for these purposes.”  In many cases, the reason why a person is charged with criminal or administrative liability probably has more to do with the particular target (and how much they irritate the regime), than with noticeable differences in the supposed ‘offence’.  In some cases, people have faced administrative charges and fines merely for the placard ‘no to war’ or similar.