Artist disappears after arrest for pro-Ukrainian anti-war protest in Russian occupied Crimea Crimean teacher dismissed and threatened with prosecution for telling students the truth about Russia’s war against UkraineRussia installs its propaganda TV after seizing Kherson and imposes 15-year sentences for reporting its invasion of UkraineUkrainian survivors of the Holocaust demand Putin and Russia get out of Ukraine Russia continues its carnage, flouting binding order from ECHR to stop bombing civilians in UkraineBabyn Yar bombed by Russia, 80 years after Nazi Massacre of Ukrainian Jews Russia proposes 15-year sentences and threatens "treason charges" for telling the truth about its war crimes in UkraineRussian schoolchildren told that Russia is bombing and killing Ukrainian children in ‘self-defence’ Putin miscalculated. Russia is fighting “an army of 40 million Ukrainians” Chief Rabbi of Ukraine demolishes Putin’s excuse for Russia’s invasion Russia bombs a Ukrainian kindergarten and apartments in its war against independent Ukraine Putin will continue attacking until Russia is stopped. Help Ukraine defend its freedom today!Russian Rule of Lawlessness in Occupied Crimea and DonbasImprisoned in occupied Crimea for opposing Russia’s war against Ukraine Young Crimean Tatar likely tortured into ‘confessing’ to anti-war protest Russian Prosecutor General given power to close media for ‘discrediting the army’ through truth about the war against UkraineJail or steep fines in Russian-occupied Crimea for playing a Ukrainian anti-war song or for saying ‘Glory to Ukraine’ 61-year-old Russian given 7-year prison sentence for criticizing Russia’s war against Ukraine, in bitter déjà vu from Soviet times Russia strips three Crimean Tatar lawyers of their licence to prevent them defending political prisonersCrimean Tatar journalist detained on charges of ‘discrediting Russian army’ and jailed for "showing resistance"
• Topics / Freedom of expression
• Topics / Human Rights Abuses in Russian-occupied Crimea 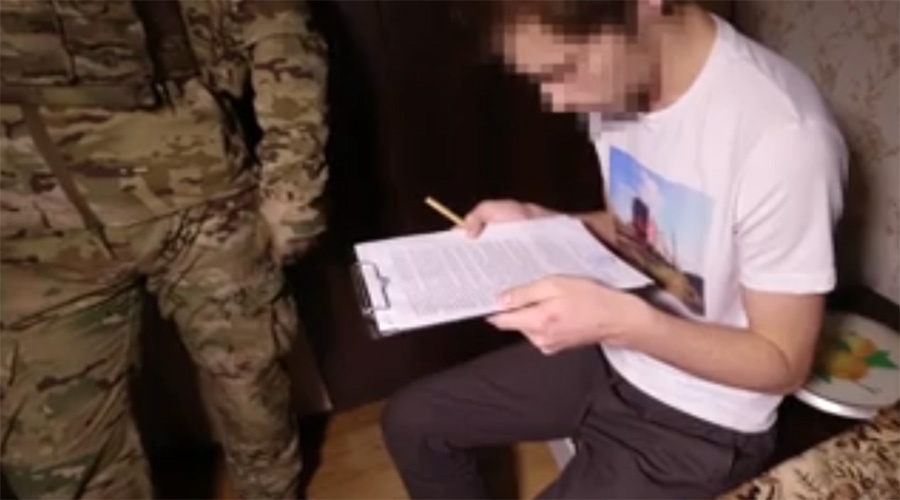 21-year-old from Sevastopol in the FSB video

A 21-year-old Crimean has received an 18-month suspended sentence in Russian-occupied Crimea for “pro-Ukrainian slogans” on social media.  The occupation Gagarin District ‘Court’ in Sevastopol chose to view such posts as “calls to extremism’.

The young man’s name remains unknown, but the Russian FSB did post a video of the man that they seized as though a dangerous criminal.  According to the Russian-controlled media Kryminform, FSB spokesperson Yelena Varlamova claimed that the young man “posted comments in the VKontakte social network containing calls to carry out violent acts with respect to groups of individuals identified by national or racial features.  In addition, the young man posted comments containing the linguistic and psychological elements of overt disrespect for certain religions, insulting for their believers.”

That words like ‘violent’ should be treated with caution is clear from the actual criminal charges.  The 21-year-old was charged with ‘public calls to carry out extremist activities’ (Article 280 § 2 of Russia’s criminal code) and insulting the religious feelings of believers (Article 148 § 1).

While details have not been provided, it seems near certain that ‘the groups of individuals’ mentioned in the young man’s posts were Russians or, most likely, the Russian invaders of Ukraine.  Given the fact that Kirill, the leader of the Orthodox Church under the Moscow Patriarchate, has essentially come out in support of Russia’s aggression against Ukraine, the young man would not have been alone had he expressed anger towards the Russian Orthodox Church.

Had anything more ‘violent’ been imputed, and had any other ethnic or religious group been targeted in the social media posts, this would undoubtedly have been described in detail.  Instead, the Crimean Human Rights Group has learned that the 21-year-old was essentially accused of posting “Ukrainian national slogans” with these allegedly containing the so-called ‘calls to carry out violent acts with respect to groups of individuals identified by national or racial features’.

The 18-month suspended sentence is with a probation period of one year.  The young man has also been prohibited from administering websites for 18 months.

On 23 May, the same KrymInform reported that a 29-year-old from Simferopol was facing five years’ imprisonment for ‘calls to extremism on the Internet’.  The information and video also came from the FSB who claimed this time that the 29-year-old had posted “commentary containing Ukrainian nationalist slogans and calls to violence in a group chat on one of the messengers”.  Here too, the wording, combined with the lack of detail, make it fairly clear that the comments were about Russians.  The charges are of ‘public calls to carry out extremist activities’ (Article 280 § 2). The FSB asserted that “the young man admitted his guilt and explained his actions as the influence of Ukrainian propaganda which he had watched on Ukrainian television channels”.

In both of the above cases, the Crimeans were very likely prosecuted merely for pro-Ukrainian, anti-war sentiments expressed on social media. In the case of Bohdan Ziza (Azizov), the situation is more serious, although he too was expressing his opposition to Russia’s war against Ukraine.

As reported, the 27-year-old Yevpatoria artist was detained for a pro-Ukrainian protest in the centre of occupied Yevpatoria on 16 May and, seemingly, remains in custody. There is every reason to believe that the videoed ‘confession and apology’ circulated by the Russian enforcement bodies was obtained through torture or other forms of duress. It seems clear that Ziza did indeed daub the Yevpatoria administration building with paints in the colour of the Ukrainian flag.  It seems less certain that he tried to throw a Molotov cocktail at the building.  Similar actions, even involving Molotov cocktails, are very often treated as vandalism, however the FSB have decided to press charges of ‘attempting an act of terrorism’, with this potentially carrying a 15-year sentence.