Ukrainian seized and sentenced in Russian-occupied Crimea for pro-Ukrainian social media commentsArtist disappears after arrest for pro-Ukrainian anti-war protest in Russian occupied Crimea Crimean teacher dismissed and threatened with prosecution for telling students the truth about Russia’s war against UkraineRussia installs its propaganda TV after seizing Kherson and imposes 15-year sentences for reporting its invasion of UkraineUkrainian survivors of the Holocaust demand Putin and Russia get out of Ukraine Russia continues its carnage, flouting binding order from ECHR to stop bombing civilians in UkraineBabyn Yar bombed by Russia, 80 years after Nazi Massacre of Ukrainian Jews Russia proposes 15-year sentences and threatens "treason charges" for telling the truth about its war crimes in UkraineRussian schoolchildren told that Russia is bombing and killing Ukrainian children in ‘self-defence’ Putin miscalculated. Russia is fighting “an army of 40 million Ukrainians” Chief Rabbi of Ukraine demolishes Putin’s excuse for Russia’s invasion Russia bombs a Ukrainian kindergarten and apartments in its war against independent Ukraine Putin will continue attacking until Russia is stopped. Help Ukraine defend its freedom today!Russian Rule of Lawlessness in Occupied Crimea and DonbasYoung Crimean Tatar likely tortured into ‘confessing’ to anti-war protest Young Crimean sentenced to 3 years after ‘confession’ almost certainly extracted through torture Russian Prosecutor General given power to close media for ‘discrediting the army’ through truth about the war against UkraineJail or steep fines in Russian-occupied Crimea for playing a Ukrainian anti-war song or for saying ‘Glory to Ukraine’ 61-year-old Russian given 7-year prison sentence for criticizing Russia’s war against Ukraine, in bitter déjà vu from Soviet times Despite Russia admitting to terrorism against Ukraine, OSCE will not expel it
• Topics / Human Rights Abuses in Russian-occupied Crimea
• Topics / War crimes

Imprisoned in occupied Crimea for opposing Russia’s war against Ukraine 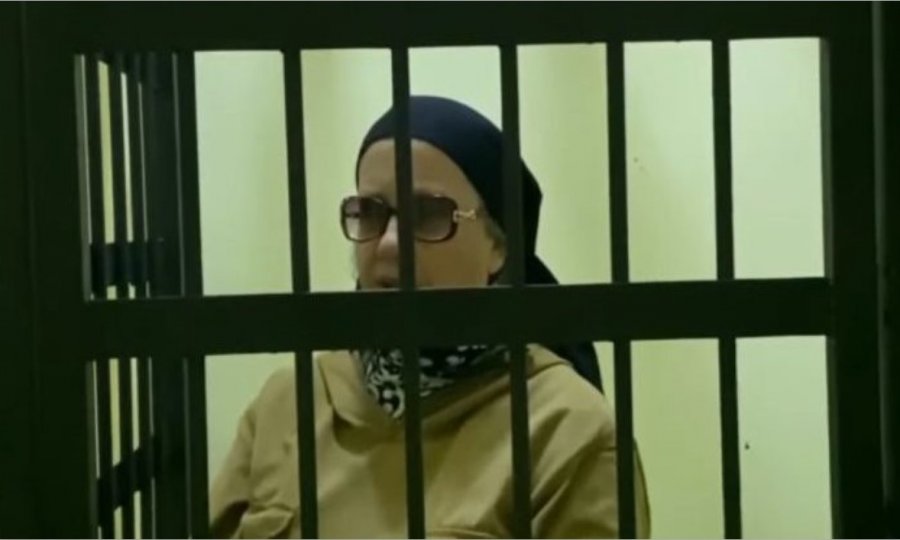 Valeria Goldenberg Screenshot from a video posted on the Internet

A Ukrainian pensioner has been imprisoned for two months and could face a five-year sentence for a protest against Russia’s full-scale invasion of Ukraine.  Valeria Goldenberg is one of at least two Ukrainians from occupied Crimea imprisoned for actions which cannot be condoned, but which would almost certainly have not received such a reaction had they not been protests against Russian aggression.  Other Crimeans have also ended up jailed for totally legal single-person pickets or dismissed from their jobs for opposition to the war.

The retired electrician was detained in early April and charged with desecrating a grave in the local cemetery at Solnechna Dolina (near Sudak) with this “motivated by political enmity”.  The Graty report by Anton Naumliuk points to a discrepancy over the date on which charges were laid, with it likely that the initiative to lodge a formal complaint over the treatment of the grave came from the Russian-controlled enforcement officers, and not from the dead soldier’s parents.  The latter are now also demanding a huge amount in moral damages (1 million roubles, or over 15 thousand euros).

Discrepancies often also mean a person has been subjected to illegal forms of duress to extract a ‘confession’. The official version is that the ‘police’ arrived at Goldenberg’s home on 8 April and that she immediately ‘confessed’ to having daubed blood and faeces (from her hens) over the portrait in military gear of Valentin Isaichev, a 21-year-old marine recently killed fighting in Russia’s war against Ukraine, and over the wreaths, including one from the Russian defence ministry.

Goldenberg is originally from Poltava but has lived in Crimea for 17 years.  She and her late father openly opposed Russia’s invasion and annexation of Crimea in 2014, and planned to leave.  He was elderly, however, and died a year later, and his daughter stayed, mainly because she didn’t want to end up being a burden on her daughter who lives in Cherkasy.

She followed the beginning of Russia’s total invasion of and attack on Ukraine very closely and was obviously concerned for family and friends in Poltava, Odesa and the Kharkiv oblast.  She found out in March that a former classmate and his family had been killed in Kyiv oblast and apparently later told the Russian-controlled ‘investigator’ that her protest was prompted both by these deaths and by the  information about Russian crimes that began emerging after the Russian army retreated from Kyiv oblast at the end of March.  “Since I am against Russia’s invasion of Ukraine, around 4 April 2022, when I discovered that [Ukrainian] soldiers had liberated Bucha, Irpin, Hostomel in Kyiv oblast, I decided to daub with blood the grave of a Russian solder who fought and died on Ukrainian territory.  There Russian soldiers are killing civilians.”

Graty reports that there is a video on the Internet of Goldenberg, who has been imprisoned since early April, standing in a narrow iron cage and asking forgiveness of Isaichev’s parents.

Her lawyer, Marlen Khalikov, is highly critical of the fact that Goldenberg has been placed in detention over such charges and believes that the entire case has been politicized.  He fears that the ‘proceedings’, due to begin on 7 June, will be made into a show trial.

Update  The 'court' on 7 June found Goldenberg guilty of the charges and sentenced her to two years in a low-security prison colony.

Ziza, a 27-year-old artist from Yevpatoria, remains in custody for a protest against Russia’s total invasion of Ukraine.  He was detained after daubing blue and yellow paint over the entrance to the Yevpatoria administration building on 16 May.  He is also accused of having tried to throw a Molotov cocktail at the building, although there do seem some grounds for doubting the latter charge.  Even if he did, indeed, attempt to throw such a petrol bomb, this would often lead to charges of vandalism.  Here, however, the FSB have decided to press charges of ‘attempting an act of terrorism’, with this potentially carrying a 15-year sentence (details here).

20-year-old Yehor was detained and jailed for four days for a legal single-person picket under a banner reading “Enough killing!” in the centre of Simferopol on 25 February.  He says that he regrets only that he didn’t protest the day before (when Russia began its total invasion).  He told Graty that “the majority are against [the war], but are simply afraid.”

He had agreed with two young women on Twitter that they would go out in protest, and apparently Yehor’s 16-year-old sister was also present.  It is clear from the ‘court ruling’ that each of the three protesters was holding a single-person picket, which, even according to Russia’s draconian anti-protest laws, is legal.

Andriushchenko says that he had gone to the centre fully expecting to be arrested, and was surprised only that it took up to an hour.  During that hour, he adds, people who saw their placards, smiled, supported and even embraced them.

There have clearly been many other prosecutions, although most resulted in fines, not imprisonment.