Invaders threaten to take children away if parents don’t send them to be indoctrinated ‘to love Russia’ Teachers in occupied Kherson refuse to collaborate with Russian occupiers Russia uses terror and abduction in attempt to force schools to collaborate in occupied Melitopol Mayor of Melitopol Ivan Fedorov abducted after refusing to collaborate with the Russian invaders Russian priest arrested and prosecuted for sermon opposing Russia’s war against Ukraine Russia effectively admits it deliberately bombed the maternity hospital in Mariupol that killed three patients, including a childRussia brings grotesque propaganda to Berdiansk after Ukrainian journalists refuse to collaborate Russian invaders murder Ukrainian volunteers Impassioned appeal from Ukrainian Muslim leader in face of Russia’s war to destroy Ukraine Russia is forcing Ukrainians from occupied Crimea and Donbas to fight in its invasion of Ukraine Children among the dead after Russian invaders opened fire on fleeing civilians Russia installs its propaganda TV after seizing Kherson and imposes 15-year sentences for reporting its invasion of UkraineUkrainian survivors of the Holocaust demand Putin and Russia get out of Ukraine Russia continues its carnage, flouting binding order from ECHR to stop bombing civilians in UkraineBabyn Yar bombed by Russia, 80 years after Nazi Massacre of Ukrainian Jews Russia proposes 15-year sentences and threatens "treason charges" for telling the truth about its war crimes in UkraineRussian schoolchildren told that Russia is bombing and killing Ukrainian children in ‘self-defence’ Putin miscalculated. Russia is fighting “an army of 40 million Ukrainians” Chief Rabbi of Ukraine demolishes Putin’s excuse for Russia’s invasion Russia bombs a Ukrainian kindergarten and apartments in its war against independent Ukraine
• Topics / War crimes

Russia teaches Mariupol children to shoot and to hate Ukraine 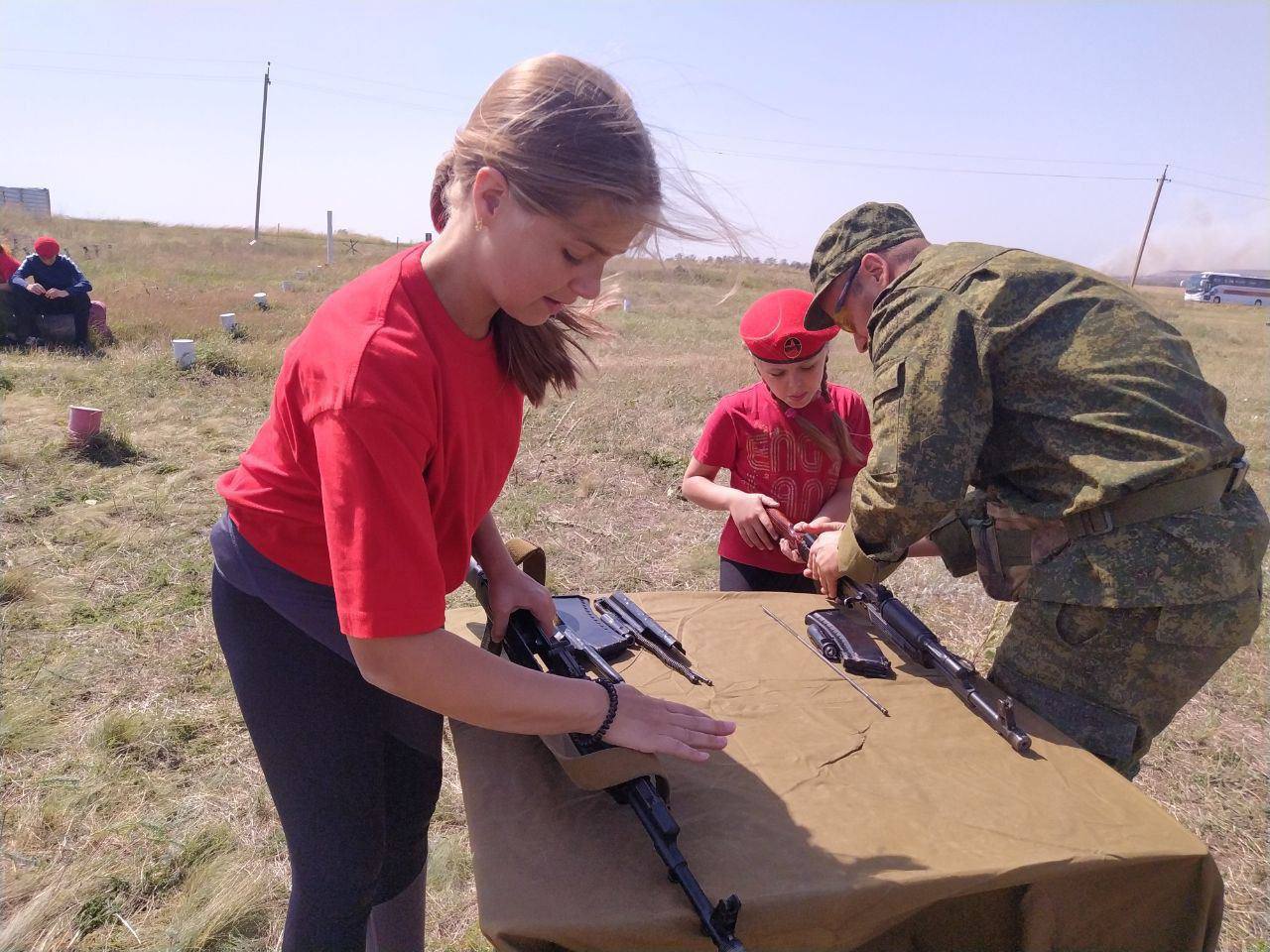 Instead of rebuilding the Ukrainian cities like Mariupol that it virtually razed to the ground, Russia is concentrating on propaganda stunts and on brainwashing children. Efforts are reportedly underway, at least in Luhansk oblast, to ensure that children are taught a Russian-falsified version of history, with the invaders threatening to take children away from parents on occupied territory who refuse to send their children to Russian-controlled schools.

The Russian invaders have been trying to organize school ‘education’ according to a Russian program for months now and running up against resistance from both teachers and parents. Several school directors and teachers have been abducted, with the whereabouts of some of them to this day unknown.

While Russia is trying to claim that the population in areas that they temporarily occupy ‘want’ a so-called ‘referendum on joining Russia’, the evidence on the ground suggests otherwise.  Parents remain unwilling to send their children to Russian-occupation schools, with the occupiers or local collaborators increasingly resorting to direct threats against such parents. On 26 August, Petro Andriushchenko, Advisor to the Mayor of Mariupol posted a copy of a letter sent to parents, by those education workers who have agreed to collaborate.  The letter initially makes polite noises, but swiftly descends into a list of threatened consequences if parents do not send their children to the Russian-controlled schools from 1 September. Information to this effect will be passed to the so-called ‘police’ who will first issue a warning, then a steep fine and will finally strip parents of their rights.  Similar threats were reported earlier, and the Eastern Human Rights Group has learned from their sources that parents are being told that their children will be sent to children’s homes, under ‘the care’ of the invaders, if they refuse to enrol their children in occupation schools.  Such threats, the NGO reports, are the result of “mass refusal by parents to take their children to school on 1 September due to substantial changes in the school curriculum.” 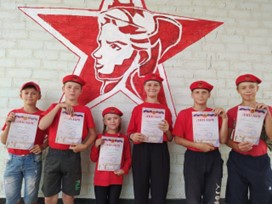 The methods that the Russians are trying to impose have already been seen in occupied Crimea and Donbas, and there are, certainly, grounds for concern.  The Mariupol City Council has posted photos from a so-called ‘children’s camp’ in Melekino, near Mariupol, and accuses the invaders of using Nazi methods and “trying to turn Mariupol children into Hitlerjugend”.  The children are being taught, the Council says, “to shoot and to hate Ukraine.”  Judging by the clothes, the children in the photos are being roped into Russia’s so-called ‘Youth Army’ or Yunarmia which elicited comparisons with the Nazis’ Hitlerjugend from its creation in 2016.  This militaristic organization openly aims to indoctrinate children into wanting to fight for Russia and with all kinds of very distorted notions about history and patriotism.

Ukraine’s Military Intelligence [HUR] reported on 28 August that in the Luhansk oblast, the invaders are preparing instructions on foisting Russia’s pseudo-history on children in schools for 1 September. The document posted is of a so-called ‘Structural plan for a lesson on ‘My history’, with this aimed at “reflecting history over many centuries of the great Russian state” and claiming areas now seized by the invaders to be part of this.  The ‘structural plan’ proposes unadulterated inculcation of deranged ideas about history, aimed at justifying Russia’s invasion.

“Most of the quotes from this document”, HUR writes, “contradict not merely historical fact, but also common sense.”.  The West is presented as trying to break “the unity and stability of ‘the Heart of the Earth’ – of Russia”, with the claim made that over 80% of its ‘people’ belong to one -threefold people, namely Russians, Ukrainians and Belarusians.  This and many other ‘gems’ essentially parrot the claims about Ukraine that have come from Russian leader Vladimir Putin and his entourage over the last couple of years and have been totally dismissed by historians.  There are, indeed, total absurdities such as the claim about the alleged emergence of “Russian statehood”, first in Staraya Ladoga and Novgorod, then in “the future Kyiv”.  In fact, Kyiv was much earlier. The ‘structural plan’, like Putin and his cronies, avoids any mention of the internationally accepted term ‘Kyivan Rus’, referring instead to ‘Ancient Rus’.

Other myths in the document include the spurious claims that the Bolsheviks “created” Ukraine and foisted the Ukrainian language on people by force.

All such ‘lessons’ will, of course, be taught in Russian, not Ukrainian, with the aim clearly, like in occupied Crimea and Donbas, to eliminate the Ukrainian language from the educational process altogether.

Russian and pro-Russian Telegram channels show videos of Russian soldiers removing books on the history of Ukraine from local libraries and the aim is to foist only Russian textbooks on schools in occupied parts of the country.

It takes only a cursory glance at the ‘textbooks’ currently used in occupied Crimea or Russia to understand why Moscow wants children to receive only this highly suspect presentation of ‘history’, one in which Russia is not an invader, but a supposed ‘liberator’ and in which Ukrainians themselves purportedly sought such ‘liberation’.