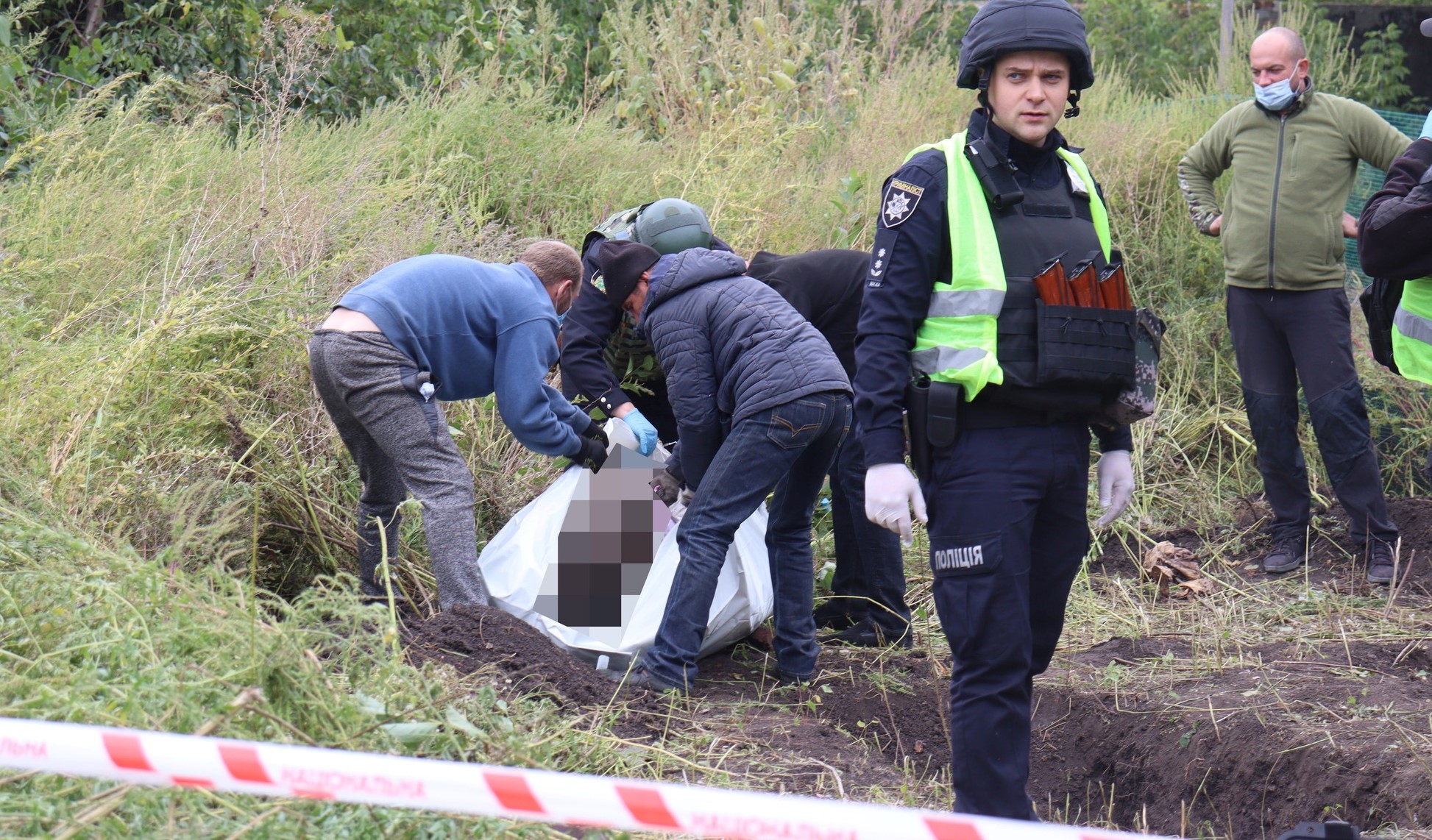 It is just days since the Russian invaders very hastily fled from the Ukrainian Armed Forces’ advance through Kharkiv oblast, abandoning areas that they had seized months before, as well as tanks, other military hardware and weapons.  Ukrainian investigators have, however, already uncovered the bodies of a number of civilians whom the Russians killed, with the number expected to rise in the coming days and weeks.  In Zaliznychne, a village in the Kharkiv oblast, four bodies have been exhumed, after they were shot by the Russians.  It was neighbours who tried to bury the men and who informed the Ukrainian prosecutor about the killings after the village’s liberation.

The Kharkiv regional police on 12 September that four bodies had been discovered the day before. Three had been buried in people’s properties, while the fourth was found on the territory of an asphalt factory.  All had died of gunshot wounds.

Serhiy Bolvinov, Head of the Kharkiv regional CID, reported that, back on 27 February, two of the civilians had been shot in the head by the Russians while at home.  One of the men’s neighbours, Maria Adyherova told the investigators that she had discovered the two men’s bodies after noticing that the door to the house was open.  They didn’t know at first what to do with the bodies, however managed to get through to the Chuhuiv police and receive permission to bury them.  Some locals dug a grave and placed the bodies in it, however Maria received information that Russian soldiers were heading in that direction and had to hide the young men, in case they too were shot.  It was she who eventually filled the graves.

A third man had been speaking with relatives from Kharkiv shortly before all contact was lost.  The police report says that some time later a stranger answered on the man’s phone and said that he had been killed. It should be stressed that all of these men, including the victim found at a factory, were civilians.

As with two other victims in Hrakove, the bodies have been sent for forensic examination, with a criminal investigation initiated under war crimes (Article 438  2).  More details about that discovery, as well as those in other areas that were occupied here:

It seems clear that more or more war crimes will come to light once areas that were under occupation are cleared of mines and it becomes possible to carry out a full investigation.

Many of the war crimes have, however, long been clear.  Russia has been bombing and shelling civilian targets, including schools, hospitals; and residential buildings in Kharkiv and the oblast since the beginning of its full-scale invasion. The relentless air strikes have become more frequent and unpredictable in terms of target as it became clear that Moscow could not take either Kharkiv or Kyiv.

Should any lingering doubts have remained regarding the cause-and-effect link between Russia’s military failures and its murderous attacks on the civilian population, these were surely dispersed on 11 September.  After Ukraine’s liberation of a large number of towns and villages in Kharkiv oblast, and international military commentators all speaking of the Russian army “in disarray”, Moscow launched a number of air strikes deliberately targeting critical infrastructure.  Nor was the link even denied by the Russian state propaganda media and by pro-Kremlin Telegram channels.  Quite the contrary since most clearly saw this essentially terrorist behaviour as the reaction Ukraine ‘deserves’ for having the gall to defend itself and do it well.