Russia destroys Mariupol and tries to get illegally deported residents to move to Siberia Russia accused of using mobile crematoria to hide its war crimes in Mariupol At least 50 Ukrainians were burned to death in Russia’s bombing of Mariupol hospitals Russian FSB produce ‘refugee’ propaganda video blaming Ukrainian soldiers for Russia"s war crimes in Mariupol Russia continues bombing Mariupol while producing propaganda videos about its ‘humanitarian aid’Russia responds to International Court order to stop bombing Ukraine by destroying Mariupol Theatre sheltering familiesRussian invaders take Mariupol intensive care hospital and its patients hostage Mass graves of the Ukrainian civilians Russia claims it is not killingTerror and abductions as Russia tries to break Ukrainian resistance in Kherson and other occupied citiesUkrainian journalist Oleh Baturin feared abducted by Russian invaders in Kherson oblast Mayor of Melitopol Ivan Fedorov abducted after refusing to collaborate with the Russian invaders Russian priest arrested and prosecuted for sermon opposing Russia’s war against Ukraine Russia effectively admits it deliberately bombed the maternity hospital in Mariupol that killed three patients, including a childRussia brings grotesque propaganda to Berdiansk after Ukrainian journalists refuse to collaborate Russian invaders murder Ukrainian volunteers Impassioned appeal from Ukrainian Muslim leader in face of Russia’s war to destroy Ukraine Russia is forcing Ukrainians from occupied Crimea and Donbas to fight in its invasion of Ukraine Children among the dead after Russian invaders opened fire on fleeing civilians Russia installs its propaganda TV after seizing Kherson and imposes 15-year sentences for reporting its invasion of UkraineUkrainian survivors of the Holocaust demand Putin and Russia get out of Ukraine
• Topics / War crimes 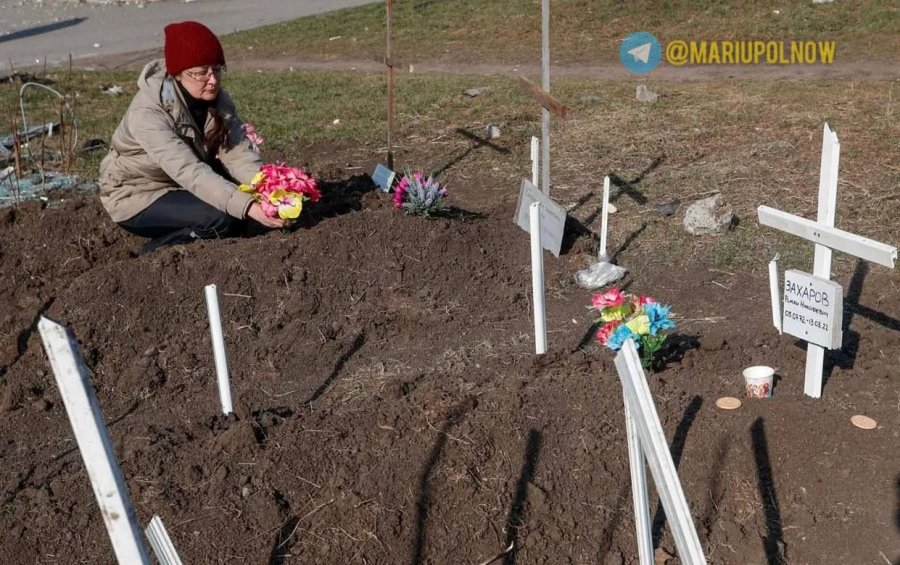 The Russian invaders are reportedly planning to totally close off the besieged city of Mariupol and carry out so-called ‘filtration’ of the entire male population.  According to Petro Andriushchenko, Advisor to the Mayor of Mariupol, those who ‘pass’ this dubious procedure are to be taken to Novoazovsk in the Russian proxy ‘Donetsk people’s republic’ [‘DPR’] where some will be forcibly mobilized.  The fate of the 5 to 10% whom Andriushchenko says have thus far ‘failed’ such procedure is presently unknown.

The plans Andriushchenko reported on 16 April differ only in scale from the brutal methods already used by the Russian invaders.  As well as carrying out a siege of the city since shortly after its invasion and preventing civilians from fleeing, Russia is known to have been using ‘filtration’ procedure, and even camps, since the second half of March.   The Russians interrogate people, check their social media accounts, even demand that they strip naked to check for ‘incriminating’ tattoos.  All of this is, of course, aimed at detecting any evidence of links with the Ukrainian territorial defence or Armed Forces, work as a Ukrainian volunteer; or even simply of strongly pro-Ukrainian and / or anti-Russian sentiments.

Andriushchenko reported that Russia is now directing everything to storm Mariupol, including Tupolev bombers.  “Everything points to it being impossible to take the city without a high level of inhumanity and the use of weapons of mass destruction”.

The filtration procedure has now taken on maximum momentum, Andriushchenko  continues.  All men are to be subjected to this procedure in filtration camps or units, with some facing particular interrogation, including with the use of mock executions.  “In general, it can be said that from 5 to 10 percent do not pass the filtration and are taken, after it, to [occupied] Dokuchaevsk and Donetsk.  Their fate after this is at present unknown, we are working on it.”

Donetsk is, of course, where the notorious Izolyatsia secret prison is.  Many of the minimum 300 Ukrainian hostages and POWs whom the Russian proxy ‘Donetsk and Luhansk republics’ are holding were almost certainly seized for their pro-Ukrainian position.

Andriushchenko  mentions also that the Russians are planning not only to block any exit or entrance to the city, but also to try to prevent any movement between districts of the city for a week.   During this period, there will be total ‘filtration’ of all men remaining in Mariupol, with all of them being taken to Novoazovsk.  According to their information, he adds, some are to be mobilized “to the Russian occupation corps”, and others forced to clear the debris [from the buildings Russia has been bombing and shelling].  Those “categorized as unreliable are to be isolated”.

The humanitarian situation in the besieged city is deteriorating still further with the invaders having taken away all medical staff.  He says that medicines are taken around in chaotic fashion, without any pretence of demanding a prescription or even medical indications of a specific condition.   The Russians claim that a hospital is to be launched, although this appears to simply be one medical worker or doctor on duty, and clearly not available to the majority of Mariupol residents who remain in a city without electricity and running water and who are almost certainly running perilously low on food, drinking water, as well as medication.

As reported, Russia has long been using propaganda methods while blocking access to information to try to deceive the population into believing that it is the Ukrainian Armed Forces who are bombing the city and killing civilians, not the Russians.

Andriushchenko  reports that the Russians have seized control of most public groups on social media aimed at looking for relatives and recording damage to homes.  They are using such pages to instead spread lies aimed at giving the impression that the Ukrainian authorities are to blame for everything, while the Russian invaders are ‘helping’ them.   Andriushchenko  is doubtless right in warning of the dangers of such propaganda methods, especially since the public groups can be accessed beyond Mariupol, at a time when the words of Mariupol residents tend to be believed.  He asks residents, therefore, to be very careful, so as to not circulate Russian propaganda.

The Mariupol City Council has also reported that the Russian invaders are using collection points and mobile crematoria to get rid of the bodies of civilians from the city.  Ukraine’s Military Intelligence reports that 13 such mobile crematoria are in use.  On 15 April, the Council stated also that the Russians were exhuming the bodies of those  buried in mass or impromptu graves in residential areas  According to accounts from Mariupol residents, the Russian soldiers are also preventing them from burying the bodies of those whom the Russians killed, with guards stationed in each courtyard to implement this.  Russia is doubtless worried about leaving more evidence of its crimes after international outrage over the indiscriminate killings of civilians, the use of mass graves in which the bodies of tortured victims were thrown, and other war crimes in Bucha and other Kyiv oblast towns.